The majority of our third week was spent reading and discussing Nabokov’s infamous best-seller Lolita. For those not familiar with this work, it depicts hilariously-named Humbert Humbert and the gross, evil, and maliciously sexual relationship that he seeks out with Lolita. Lolita is just twelve years at the start of the novel, and fifteen by the end of her time with Humbert. This disturbing relationship is even more complicated by their relationship to one another. Humbert Humbert first marries Lolita’s mother and acts as her stepfather, but when Lolita’s mother dies, Humbert Humbert is her only guardian. (We would also watch Stanley Kubrick’s film version of the tale–it was just as jarring.) A common theme we have been discussing in Nabokov’s works is how to grapple with narrators that are uncomfortable, perverted, and otherwise crazy, yet are given clever and beautiful Nabokovian language to tell their stories. Nabokov himself is an expert at creating these eccentric characters that make us cringe, while simultaneously loving and savoring parts of the novel that feel grittier.

One way that Nabokov accomplishes this in Lolita is with his beautiful descriptions of, well, anything but Humbert Humbert’s relationship with Lolita. A theme for our discussions was “America” and how Nabokov is able to provide exhaustingly rich pictures of America in the 40s and 50s. Nabokov composed Lolita in the late 40s and early 50s, and we learned that every summer he would take a road trip with his wife Véra out west. As an article in the New York Times puts aptly, “At the height of the Cold War, an expatriate Russian novelist with the resonant name of Vladimir was roaming through the reddest of red states” (link). This same NYT article even writes that the word “nymphet”, invented by Nabokov and used grossly by Humbert Humbert to describe Lolita, was added to the Oxford English Dictionary. Nabokov’s works are filled with self-conscious reflections on what it means to be a Russian émigré writer now living in the United States, and he makes big efforts to integrate himself as an artist by familiarizing himself with English—the creation of nymphet, for instance. But another possible way that Nabokov fixes himself into American culture and literature is by taking these road trips—a classic staple and fascination of many classic U.S. novels. Corinne, our professor, informs us that Nabokov composed most of Lolita while he was on these trips with his wife. In addition to writing and seeing the West, Nabokov of course also hunted for butterflies.

Nabokov’s descriptions of The American West should still resonate with us today in a variety of non-natural scenes—whether from places we have heard about in a history textbook, or those places we see as trying to pass as having an “authentic” vintage style (don’t fall for it!), or places that simply haven’t changed. A drive towards Manitou Springs shows some of these styles, especially with some of the smaller roadside motels and diners. As usual, no description of Nabokov’s writing is complete without sharing some of his own words:

“There is nothing louder than an American hotel; and, mind you, this was supposed to be a quiet, cozy, old-fashioned, homey place—“gracious living” and all that stuff. The clatter of the elevator’s gate—some twenty yards northeast of my head but as clearly perceived as if it were inside my left temple—alternated with the banging and booming of the machine’s various evolutions and lasted well beyond midnight.”

“We passed and re-passed through the whole gamut of American roadside restaurants, from the lowly Eat with its deer head (dark trace of long tear at inner canthus), “humorous” picture post cards…impaled guest checks, life savers, sunglasses, adman visions of celestial sundaes, one half of a chocolate cake under glass, and several horribly experienced flies zigzagging over the sticky sugar-pour on the ignoble counter; and all the way to the expensive place with the subdued lights, preposterously poor table linen, inept waiters (ex-convicts or college boys).”

Being both an émigré and a writer Nabokov saw a lot of the subtleties and nuances of sales and experiences being advertised in The American West with a keen attention to all of the odd details. His descriptions of diners and of the hotels resonate with me. Next week I will be taking a road trip West from Colorado to California, and in a final post hope to share how his descriptions hold up today, and even share how he describes the beauty of the untouched West.

On a final and sweet note from the week, Corinne invited us to her home for a class dinner with her and her family (and no, it did not align with Nabokov’s description of American eateries with the “subdued lights” and “preposterously poor table linen”). With a paper due the following day, we found that the Mediterranean food, the informal class gathering, and even a silly book with no pictures were all a lovely way to relax and finish our week as a class (Thank you again, Corinne!). 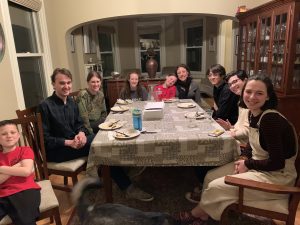 Currently an undeclared sophomore, I enjoy art museums and running along Monument Creek. When I find the time, I like to make ceramic sculptures! View more posts