Throughout our class time last week, groups of us watched documentaries, gave presentations, and taught 90-minute lessons in a project called Teaching for Social Justice. Two of the documentaries (Precious Knowledge and The Children’s March) profiled examples of student organizing that, as our class agreed, everyone should know about. We are young people and students ourselves, and have a lot to learn from examples of students enacting social change in the face of structural barriers, requiring critical awareness of their agency and position in the world. In the wake of Friday’s Climate Strike, these students’ dedication to change-making is, though it sounds cliché, incredibly inspiring. Watching these documentaries taught me that explicit analysis of young peoples’ movements is an essential part of a transformative education geared towards promoting both personal growth and collective social change. So here are some quick and grossly oversimplified summaries of these examples of student activism, as a tiny, tiny start: 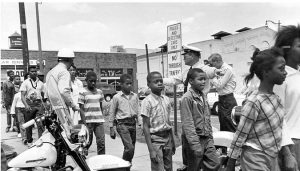 What: The Children’s March was a student demonstration conducted at a pivotal point in the Civil Rights Movement that often goes un-reported in mainstream narratives of the movement. Thousands of students, after being covertly trained in non-violent tactics by NSLC leader James Bevel and organized via secret radio codes, skipped school and marched from the 16th Street Baptist Church, protesting gross racial injustice in their city. Despite being urged by their parents and influential Civil Rights Leaders not to protest for their own safety, the children exercised their civic agency anyways. They were uniquely positioned to do so because, unlike their parents, they did not risk losing their jobs; however, the risks and consequences of their activism were still monumental. Students were arrested in droves, and the county jail was filled with almost 1,000 school-aged children on the first day. By the second day, police, led by Commissioner of Public Safety Bull Connor, resorted to violence, unleashing fire hoses, dogs, and batons on groups of student protesters and continuing to make arrests so large-scale that they were taking students to the jail in school buses. Students were not deterred, and continued to protest in staggering numbers throughout the week, effectively bringing the “normal” workings of Birmingham’s institutions to a halt.

Outcomes: Students were released after intense national public pressure, stemming from President Kennedy himself, after footage of the police brutality was widely publicized. It took images of children being attacked to spark public outrage over racism in Birmingham and across the country. Negotiations ended in the government of Birmingham’s agreement to desegregate public spaces, promote nondiscriminatory hiring practices, and facilitate ongoing public meetings between black and white community leaders. The KKK’s bombing of the 16th Street Baptist Church months later, killing three young girls, was a tragic and violent form of retaliation against the success of the Children’s March, which is cited as one of the catalyzing movements for the passing of the Civil Rights Act of 1964 and an inspiration for movements across the nation far into the future.

What: For years, the Mexican American/Raza Studies program at Tucson High School, which emphasized students’ knowledge of their own cultures and value of their life experiences, unity and love for humanity based on the principles of Paulo Friere, and social justice via organized action and critique of oppressive social systems, had been contributing to high levels of student engagement, increased test scores, and higher graduation rates among mostly Chicanx and Latinx students. However, during the 2008-2009 school year, State Superintendent Tom Horne initiated HB 2281, which would ban the program on the grounds that it separated students based on race (any student could join the classes, and traditional practices of academic tracking often segregate students by race anyways), and promoted “anti-American” values. The film tracks the bill’s advancement through various levels of government, exposing public officials racist opposition to the program, masked in the colorblind narrative that students should not learn that they are oppressed and that all students have equal opportunities and should thus be educated in exactly the same way. Most importantly, Precious Knowledge highlights students’ peaceful and impassioned protests to keep classes that felt relevant to them as individual and cultural beings.

Outcomes: Though HB 2281 passed, and the ethnic studies classes were outlawed, students built love and solidarity among themselves and their communities and gained critical skills in public organizing and civic engagement. The movement to promote rights for Latinx students in Arizona schools continues to this day, largely spearheaded by the activist group, UNIDOS. In 2012, HB 2281 was declared to have been “motivated by racial animus” by a federal court.

My name is Emma, and I am a junior English major and Education minor from Littleton, Colorado. On campus, I am a writing center tutor, editor for Cipher magazine, and work with the Public Achievement program at North Middle School. This block, I am in ED 235 "From Multicultural Education to Critical Pedagogy: Civil Rights in U.S. Public Education" with Professor Tina Valtierra, and I'm excited to share my experiences! View more posts