It’s been a busy fall for CC Physics Professor Shane Burns. In early October when the Nobel Prize in physics was announced, Burns and Katy-Robin Garton ’01 knew more than the average person about the background of the project. Burns and Nobel winner Saul Perlmutter searched for supernovae, which are massive exploding stars, when they were graduate students at the University of California at Berkeley in the 1980s. Burns, Perlmutter, and a small group of others began the work that resulted in the 1998 discovery of the accelerating expansion of the universe. 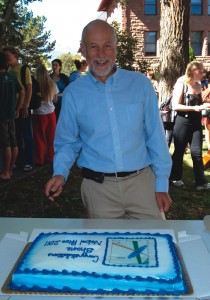 The physics department presents Shane Burns with a cake decorated with one of the equations from the Supernova Cosmology Project at their annual fall picnic. Photo by Leslie Weddell.

In early November, Burns received a call from his long-time collaborator, Perlmutter, who invited Burns and his wife, Stormy, to attend the Nobel Prize ceremony in Stockholm, Sweden, in December. Burns will attend a variety of events, including the Nobel Prize award ceremony, Nobel lectures, banquet, ball, and the Team Science colloquium at Stockholm University. (See Stormy’s blog)

Stormy Burns is the office coordinator in the music department, and daughter Jessica Burns ’06 graduated with a degree in anthropology. The Colorado House of Representatives awarded Burns a commendation in October for his part in the Nobel Prize. To view a video of Burns and Garton discussing the project, go to: http://vimeo.com/coloradocollege/nobel