Jake Norton loves a challenge. So it’s not surprising to see his name attached to a project appropriately titled Challenge21. 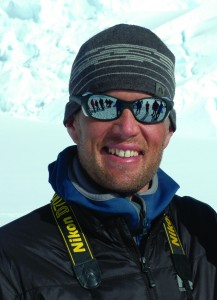 Jake, 37, is a motivational speaker, photographer, and professional climber in Golden, Colo. He grew up in Massachusetts, and climbed his first big mountain — Washington’s Mount Rainer — in 1986 at the age of 12. He arrived in Colorado Springs in 1992, and as a first-year at Colorado College, spent much of his free time climbing routes in Garden of the Gods, Turkey Rock, and on Shelf Road. By the time he was 35, he had already spent more than a year of his life on Mount Everest, which he has summited three times.

When he wasn’t in the Himalayas, he was climbing in other parts of the world.

Jake has been a professional climbing guide since 1993, and as he traveled, he has documented his adventures with photographs that blossomed into a second career, MountainWorld Photography. “In every case, my focus has been the same: To create unique, compelling images that capture essential moments and convey the story of adventure, of nature, of humanity,” he writes on his website. “Every image, I hope, has an element of those four keys: teach, share, communicate, understand.”

Jake says his latest program, Challenge21, “is the result of a longtime desire to combine my passion for climbing mountains with my deep desire to leave a lasting, positive impact on the world.”

Challenge21 is a project designed to help combat the world’s most pressing development crises — water and sanitation. Jake will attempt to climb the Triple Seven Summits — the three highest peaks on each continent — over several years to raise at least $2.1 million for partner organization Water for People and get at least 2.1 million people actively engaged in and passionate about the water and sanitation crises.

“There is a huge amount of drama and inherent visibility in climbing, but in the end, the only people benefitting from it directly are those engaged in a specific climb,” Jake says. “The hope with Challenge21 is to make climbing about more than just climbing.”

Jake chose CC because he wanted to design a major that had a South Asia emphasis. He majored in philosophy and history and traveled to Nepal and wrote his thesis about the local religion, a synthesis of Buddhism and Hinduism. He was there for six months, and learned the Nepalese language and taught English in Kathmandu.

Jake will climb with different groups on different mountains; teams will be chosen according to their climbing skills and the difficulties each peak presents. In many cases, the highest peaks on each continent aren’t necessarily the most difficult, Jake says. “Many of the second and third highest peaks on each continent are significantly harder than their higher neighbors.”

Jake looks forward to each climb, but his satisfaction from climbing is not about conquering the world’s high peaks. “Climbing for me has always been a journey, not about summits,” he says. “And that feeling has only grown stronger and poignant over the years. What I look to for each expedition, and what I gain from each, is growth and challenge in all realms. Mountains push me, test me, scare me, and invigorate me like nothing else in life, and I always come away from an expedition — whether we reach the summit or not — with a new perspective.”