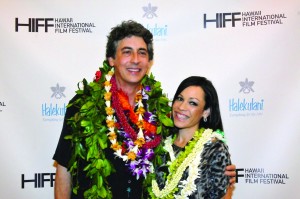 Kaui Hart Hemmings with Alexander Payne, who directed the screen version of her novel, "The Descendants." Photo by Ed Morita.

Kaui Hart Hemmings ’98 has been called “Hawaii’s Cinderella.” Who is her Prince Charming? George Clooney, of course.

Their relationship isn’t the stuff of fairy tales. Instead, it’s an artistic collaboration that has resulted in a movie version of Kaui’s first novel, “The Descendants.”

Kaui’s novel has been adapted for the big screen, and that film of the same title opened this fall to glowing accolades and talk of an Oscar for its leading man.

Kaui worked closely with director Alexander Payne (you might know him from “Sideways,” or “The Savages” or HBO’s “Hung”) in this film adaptation.

In an interview at a film festival, Payne said his relationship with Kaui “was the closest I’ve ever had with an author of a novel.”

“The Descendants” is a story about a family in Hawaii that has been rocked with change. Clooney plays Matt King, a wealthy Honolulu attorney, who struggles to reconnect with his daughters.

In an article published several years ago for The Guardian, a British newspaper, Kaui said she writes about families “to create meaning where there is none. It’s sort of like making your own clothes — you can pick the pattern, the fabric, cut it and stitch it to fit. No matter what materials you use, at the end it will come together.”

Kaui says the experience of having her book adapted was “very positive and fun. It wasn’t scary or annoying at all. I went into it thinking that no matter what happens, my book will always be intact. The adaptation was incredibly faithful. I read many versions of the script and gave my notes and feedback, so I was involved from the start.”

Admitting that she thought her book would make a great movie all along, “with an energy and momentum that would work on film,” Kaui says she loves the film. “It’s the first film, I think, truly set in Hawaii and about the people who live here.”

Kaui not only had creative input in the film; but she also got to know the cast, which includes Matthew Lillard, Judy Greer, and Beau Bridges. “Alexander (the director) moved to Hawaii eight months before shooting and we’ve been in contact ever since,” she says. “He and the cast have been to my house, we played softball, had dinners … I was Clooney’s secretary in the movie, so I had to act with him, too.”

Q: How do you introduce yourself at a cocktail party?

A: “Lost in Shangri-La” (Mitchell Zuckoff)

Q: What’s the most fun you had today?

A: “I wandered around San Francisco by myself.”

Q: What do you do regularly that you wish you never had to do again?

Q: And a little about yourself?

A: I live in Hawaii with my husband, Andy, an attorney. We met a few months after I graduated from CC, in Breckenridge. We have a daughter, Eleanor, who is seven, and a son, Leo, 14 months, who we recently adopted from Ethiopia.

Q: How do you think your education at CC shaped the rest of your life?

A: Since I work alone, CC has helped me with self-discipline and independent thinking. It helps you customize your life, in a way.