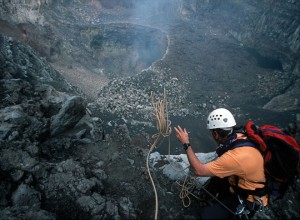 Preparing to descend into the smoking crater of the Masaya Volcano in Nicaragua is Ken Sims ’86. This trip in 2006 to gather critical rock and gas samples was just one of many missions Sims has taken worldwide in his quest to help better understand volcanic processes. Photo courtesy of John Catto, Alpenglow Pictures, Inc; www.alpen-glow.com

He’s been called the man who collects molten lava, was recently featured in National Geographic magazine, and is widely respected as one of the world’s top isotope geochemists.

Ken Sims ’86 is associate professor of geology and geophysics at the University of Wyoming in Laramie, recruited back to the West from a tenured position as a scientist at the Woods Hole Oceanographic Institution (WHOI) in Massachusetts. He has studied geologic features up close, deep on the ocean floor, and inside smoldering volcanoes from Antarctica and South America to Africa and Asia.

His claim to fame, now documented in numerous national and international articles and videos, is rappelling into smoking volcanic craters to get the exact gas and rock samples he wants from perilous positions. But Sims insists his work is about much more than volcanoes and adventure. In general, he gathers and analyzes radiogenic isotopes as part of his studies to better understand some of the earth’s fundamental processes. 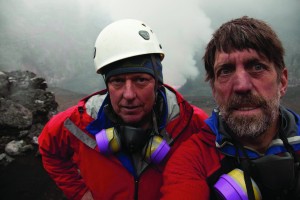 Ken Sims ’86 and John Catto ’82 stand near the mouth of Africa’s most active volcano, Mt. Nyiragongo, in the Democratic Republic of the Congo in July 2010. A preeminent geochemist, Sims gathered samples from within the volcano as part of work to help determine when it may erupt again. Catto, a professional filmmaker and photographer, was filming Sims’ work for a National Geographic Channel program: Man vs. Volcano. Climbing buddies while they were at CC, Catto and Sims have worked together for many years on such dangerous expeditions. Photo courtesy of John Catto, Alpenglow Pictures, Inc; www.alpen-glow.com

According to documents related to his tenure promotion at WHOI, Sims is a “world-class researcher” recognized “as working on, and making significant contributions to, some of the most important and challenging problems in earth science.” He’s known for work in understanding the genesis and evolution of volcanoes, ocean ridge formation, and the dating of oceanic crusts.

“It all comes together for me in the natural world, both the physical and intellectual challenges,” says Sims. He admits having a “fascination with totally powerful things.”

“It’s phenomenal,” says Sims reflecting on last year’s visit to the largest lava lake in the world. But more than the chance to see such wonders himself, Sims says it is the purpose behind these trips that keeps him going.

“I can make a difference in Goma trying to prevent a crisis for people in a war-torn region,” he says of work to help determine when the volcano Nyiragongo in the Democratic Republic of the Congo may next erupt and endanger nearly one million people. He believes he and his colleagues are getting much better at short-term predictions of when a volcano might “go,” and that such predictions can have enormous impact.

Recognizing how his career has developed, Sims quickly gives credit to Colorado College. From the climbing community and the much-needed financial aid, to the geology department from which he graduated with honors, Sims says, “I really owe CC everything.

A Colorado Springs native, Sims still has relatives in the area and stays in touch at CC, serving on the Ritt Kellogg Memorial Fund Advisory Committee. He has also taught some geology classes at CC.

In Wyoming now, when he’s not researching a problem or teaching, he enjoys getting out in the mountains and spending time with his wife and two young children.