“Dear Friends:
Some of my CC friends from the early 1940s may like to know that The Alumni Assn. of Johns Hopkins U (where I taught economics from 1950 to 2005, with an occasional absence) has given me their Heritage Award, given to a few alumni and friends of the university for unusual service over an extended period. I was in the class of 1944  at CC, but left in 1942 because of WWII, and finished my education at the U of Chicago with a B.S. in physics and a Ph.D. in economics. The only CC person I am still regularly in touch with is Betty Van Valkenburgh Lindeman ’46, who married my best friend George Lindeman ’44 (now deceased). Their son Ted is a professor at CC. Betty’s sister Paula Van Valkenburgh Wardwell ’44 was in my class. Bob Clark ’44 and I exchange Christmas newsletters. I extend regards and good wishes to anyone who may remember me.” 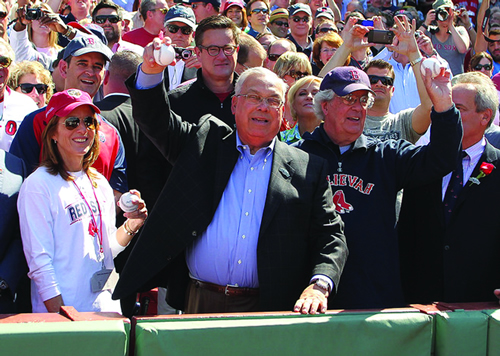 Tom Fitzgerald ’57 was invited by the Boston Red Sox to join Boston Mayor Thomas Menino and Caroline Kennedy in first-pitch ceremonies in April. Tom’s grandfather, John F. “Honey Fitz” Fitzgerald, was the mayor of Boston in 1912, when he had the honor of throwing out the first pitch. For the 100th anniversary of Fenway Park, Tom was given a ball and told to throw it to baseball legend Carl Yastrzemski. “What a special day it was to be a part of the Fenway celebration and to have Yaz as my battery mate, even if it was only for a single pitch,” Tom says.

Tom Cohen developed the movie and co-wrote the screenplay for “The River Why,” based on the novel of the same name by David James Duncan. Tom’s wife produced the film, and together they manage the company that owns it. “The River Why” stars Zach Gilford, Amber Heard, and William Hurt.

Jane Lubchenco was a recipient of the Women In Technology International award during a three day WITI Women Powering Technology Summit in Santa Clara, Calif. The awards are considered among the most illustrious for women in science and technology. Jane is administrator of the National Oceanic and Atmospheric Administration. Under her leadership, that agency has focused on restoring fisheries to sustainability and profitability, restoring oceans and coasts to a healthy state.