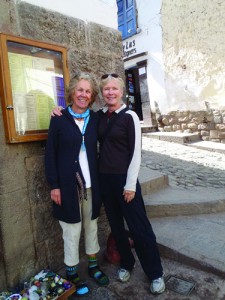 Two alumni crossed paths in Cusco, Peru. Catherine McGuire ’66and Jan Wanner Snooks ’73 had traveled together in 2011, on an alumni trip through the Grand Canyon. In April of this year, the two women were traveling independently in Peru when Catherine noticed Jan walking by. The two are now planning another trip down the Colorado River.

Biff Birkenmayer is celebrating his 21st year in the title insurance industry as a sales representative and continuing education instructor for the Colorado Real Estate Commission. • Gay Witherspoon and her artwork were featured in an article in the Spokesman-Review (Spokane, Wash.) newspaper this spring. Gay says she used to draw and paint in oils, but 10 years ago, she began using watercolors. “I enjoy  the transparency of colors in watercolor and color is one of the most important aspects of art for me,” she said. “I also enjoy the challenges of watercolor. It is not an easy medium.” Gay had her first exhibit five years ago, and has since shown at Barrister Winery and with the Spokane Watercolor Society.

Michael Hannigan was awarded a Partners in Service Award by the Business and Community Alliance of Colorado College. Michael founded the Pikes Peak Community Foundation in 1998 and has served as executive director ever since. He is currently serving as managing director, executive director, and board member for several local nonprofit organizations and manages his own consulting firm, Hannigan & Hannigan. He also served as a director of development for CC for 10 years. 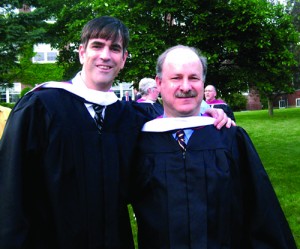 Two generations of alumni from CC — Dan Traub ’76, and Scott Boyett ’93 — graduated in 2011 from Norwich University with master of arts in military history degrees.

Nancy O’Malley and her husband, Doug Dadisman, have moved to New York where she will serve as the chief payment systems integrity officer for MasterCard. Nancy will be responsible for managing MasterCard’s global fraud detection, prevention, and mitigation strategies.

Peggy Millett Zemach is the new executive director of the Durango Arts Center in Durango, Colo. Previously, she worked as a consultant for the Southern Ute Cultural Center and Museum in Ignacio, Colo. She and her husband, Art, have three children, ages 21, 19, and 16.

Ross Barnhart was honored recently as Administrative, Professional, and Technical Employee of the Year for Pueblo Community College. Ross was honored for his work as director of the college’s Learning Center. • Marty Kemmer-Contreras was promoted to community relations director for the Colorado Springs Community Partnership for Child Development. She is a 2010 graduate of Leadership Pikes Peak. 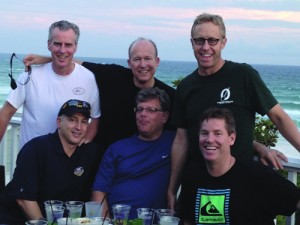 Friends and members of the classes of ’84 and ‘83 recently reunited in Watercolor, Fla.; from left, top, John Baumstark, Peter Armstrong ’83, and Eric Tibby, and from left, bottom, Tom Levy, Kelly Powers, and Rich Laws.