Oscar Soule ’62 found his passion — baseball — while growing up in St. Louis. 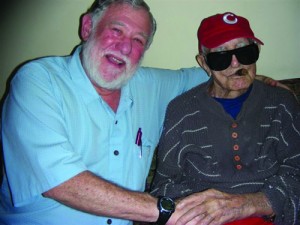 Says Oscar: “This is a picture of Connie Marrero and me in his Havana apartment in January 2012. The picture of Victor Mesa and me was taken at the home stadium of Matanzas. I was about to ask Mesa for his autograph on a ball when the Cuban national play by play announcer came up to do his pre-game interview. One game per night is televised all over the country due to the fact that electricity is so scarce that night games are limited nationally to one. Mesa threw his arm around my shoulder and began talking. It was my “Andy Warhol 15 Minutes of Fame,” but it lasted for three. However in those three minutes, I became a national celebrity, seen by millions since baseball is a national religion in Cuba. I must say that was one of my life’s “magic moments,” being hugged by Victor Mesa and viewed by a nation. Needless to say, I was the envy of my Cubaball teammates.”

The retired ecology professor and academic advisor spent his 33-year career helping his students discover theirs after heeding some excellent advice at Colorado College.

CC professor Richard Beidleman took aside the “not very good” student after Oscar had received his first and only “A” in a history class while struggling in his zoology major. He suggested that Oscar might want to consider studying what he loved, rather than what he felt he had to.

“It taught me to look for what my students do well and be a springboard to what they want to do,” he said of his 33 years at Evergreen State (Wash.) College. “Like me, they say, ‘my Dad is a doctor so I am going to be one,’ even if they are not suited for it. That advice molded me into the kind of teacher and advisor I was.”

After receiving a master’s and doctorate in ecology from the University of Arizona, he became one of the original faculty at Evergreen State. Oscar took advantage of the interdisciplinary nature to explore his passion and how it relates to other disciplines.

“Baseball was the eye of the needle into subjects such as business, economics, women’s studies, music, art, and science throughout the years,” he said.

One of his favorite courses focused on minor-leaguers who never made “The Bigs” and how their careers mirrored the plots of classic literature. 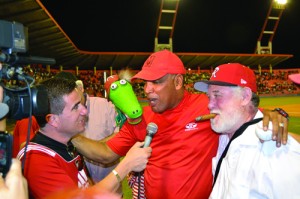 “The stories were often the same: ‘I was the last guy cut at spring training or I was called up but pulled a hamstring and missed my chance,’” he said. “Something, sometimes out of their control, sometimes their own fault, kept them from realizing their dream. It is that humanity, sometime tragic, that makes the characters of Dickens and Dostoyevsky so engaging.”

In his final year at Evergreen, Oscar “rationalized” a 2004 trip to Cuba to prepare for his Economics of Baseball in Latin America course. He goes back every summer. He has met such legends as 19-year All-Star Victor “El Loco” Mesa, Enrique Diaz, the nation’s all-time hits and steals leader, and Connie Marrero, the oldest living former Major League Baseball pitcher, who turned 101 on April 25.

“He either saw or played against Satchel Paige, Josh Gibson, Ted Williams, Stan Musial, and Sandy Koufax,” Oscar said. “Any question I had, he had an answer.”

That is high praise from a trivia devotee like Oscar, who was the Seattle Mariners’ 2008 Fan of the Year. He organizes annual trips for fans to attend Opening Day, and has led more than 7,000 fans on such trips since the franchise started in 1977.

It all dates back to Beidleman’s advice to follow his passion, which he does now full-time in retirement.

“Every culture has a spring festival based on hope and new life which is the case for most every baseball fan every year,” he said. “My avocation has now become a vocation of sorts.”