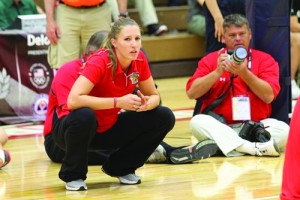 The experience made a big impression on Tania, a former CC volleyball player.

“Coming in, I did not know what to expect,” she said. “I saw firsthand how hard they worked to overcome their disabilities. It was really inspiring.”

When the opportunity came up in 2011, the coach jumped at the chance to volunteer to work with the U.S. Marines men’s sitting volleyball team.

“I knew what I was getting into and was happy to have the chance to give back,” she said. “I love what I do and I love working with the Marines.”

Tania worked as a volunteer assistant volleyball coach for the past two Warrior Games, which were held in Colorado Springs in April. The Olympic-style competition is for wounded, injured, and ill service members and veterans. 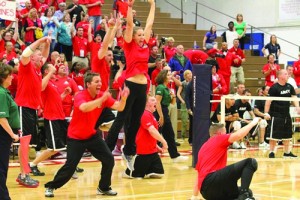 The Madison, Conn., native continues to get a lot out of coaching the Marines.

“It makes you realize how lucky you are,” Tania said. “They have the everyday challenges we all do and they have their disabilities to contend with. They are such a tight group. They support each other, stay determined, and laugh a lot at each other along the way.”

Tania, who earned a history degree at CC, is enrolled in the master’s of teaching program at the University of Southern California. She makes her living coaching a club squad, boys’ varsity high school and middle school teams, and as an assistant for high school girls in the Milken school district in Los Angeles.

It was no surprise to Coach Swan that Tania went into coaching. He said she showed the dedication needed to transform herself from a raw talent to a full-time college starter and later as a semi-pro player in Switzerland. A knee injury ended her playing days.

That drive gives her something in common with the servicemen she admires. Their enthusiasm mixed with her knowledge spurred the team to Warrior Games gold in 2011 and silver in 2012.

Tania hopes her teenage players may witness what people with disabilities can accomplish as she has observed these past two years.

“I would love to begin working with an adaptive sports program in the L.A. area,” she said. “It is something my kids should see. They would experience discipline and witness the will necessary to succeed in a profound way. That is a lesson everyone should have.”