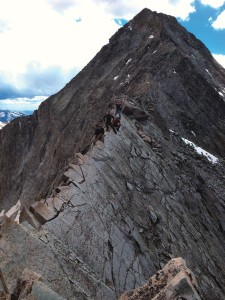 Three CC alumni and a friend summited Capitol Peak near Aspen in June. The group included Stephen Limburg ’04, Jonathan Mattes-Ritz ’04, MAT ’07, Paquito Lopez ’04, and friend Yevgeny Babinsky. The route took them along the famous “knife edge” that drops 1,000 feet on either side. Stephen recently completed his Ph.D. in mathematics at the University of Colorado-Boulder and is working for a commodities hedge fund in Boulder. Jonathan teaches pre-algebra and coaches lacrosse at an all-boys school in Washington, D.C., and Paquito has finished his first year as a full-time science teacher at a public charter school in Denver.

Rachel Garton DePuy is a general surgeon for Delta Surgical Associates/Delta County Memorial Hospital in Delta, Colo. She lives in Hotchkiss, Colo., with her husband, Jon, and their two daughters.

Chris Heroy is crew chief for Earnhardt Ganassi Racing; facilitating driver Juan Pablo Montoya. Chris previously worked for NASCAR veteran Mark Martin at HM Team. Chris majored in physics at CC, and worked with the U.S. Geological Survey. His original career path – becoming a professor – changed when he was offered the chance to be a vintage mechanic in California. From there, he moved into an engineering position in the Toyota Atlantic open-wheel development series. He joined Hendrick Motorsports in 2004, serving as lead engineer on the No. 5 car for six of his seven years there.

Megan Woodburn has been selected to join the prestigious Texas Lyceum, Class of 2013, as a director. The Lyceum is a leadership organization focused on identifying the next generation of top Texas leaders.

Megan Hytjan O’Neill and her family attended the Sturge-Weber Foundation’s 13th International Conference in Denver July 25-27. Megan’s daughter, Ashlyn, was born Oct. 21, 2012, and was diagnosed with Sturge-Weber Syndrome, a rare congenital neurological and skin disorder. The conference celebrated the foundation’s 25th anniversary, as well as the discovery of the mutated gene that causes SWS. Megan’s friend, Stephanie Shaw Johnson submitted a song she wrote, “We Weren’t Made to Go Alone,” in the foundation’s Songs for Sturge contest and she was chosen as the winner.

Ewen Callaway is the author of an article entitled “Pathogen genome tracks Irish potato famine back to its roots” in the May 2013, issue of Nature. The article tracks the pathogen that caused the 1840s potato blight in the U.S. and Mexico. 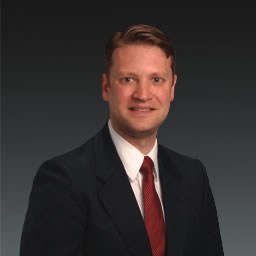 Duncan MacLaren has joined White and Williams, LLP as a junior associate attorney in their subrogation department. He handles cases involving property damage caused by fire, water, negligent construction, and product defect. Before joining White and Williams, he interned in the commercial law division of the City of Philadelphia’s City Solicitor’s Office.

Following a year-long internship at the University of Maryland-Baltimore, Kyle D. Marshall completed a three-year residency in anesthesiology at New York Medical College-Westchester. In his last year, he was honored as chief resident. He recently participated in a medical mission to the Dominican Republic with a team of American and Venezuelan surgeons, where he provided anesthesia to young children born with cleft lip and palate deformities. This July, he returned to Colorado to begin a fellowship in regional anesthesia at the University of Colorado Hospital/Anschutz Medical Campus-Aurora. 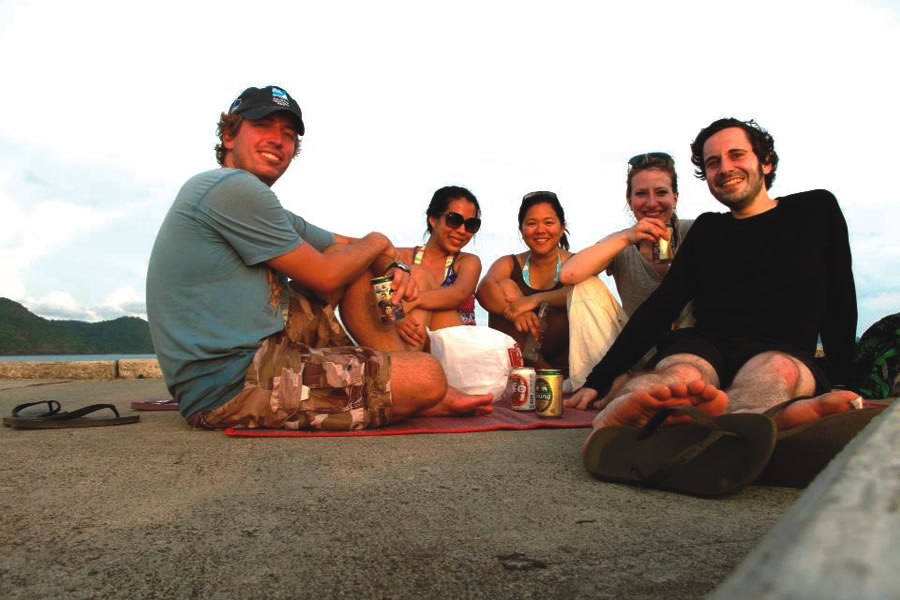 Ten years after studying together at CC, three friends ran into each other on a remote Thai island in April. From left: Chris Hennessey ’04, Dalina Prasertsri ’03, friends Sarah and Kathrin, and Christian Bierwirth ’03.

Catarina Alisiani has been promoted to senior account executive at The Integer Group, a promotional, retail, and shopper marketing firm based in Lakewood, Colo.