The power and creativity of a dance performance by two Colorado College students drew enthusiastic reviews at Edinburgh Fringe, the world-renowned arts festival in Scotland.

“A thought-provoking and powerful performance,” said one reviewer of the piece “Black & Blue”, choreographed by Kate Rafter ’13 and performed by Rafter and Dustin Ordway ’14.

“The two performers explored, through modern dance approaches, a non-verbal dialogue about connection, aggression, and resolution,” wrote reviewer Didi Craze. “Music, together with strong movements and quietly expressive facial expressions, made this a moving and dynamic piece of work.”

“It’s always thought out but not polished, and intentionally so,” Womack said. 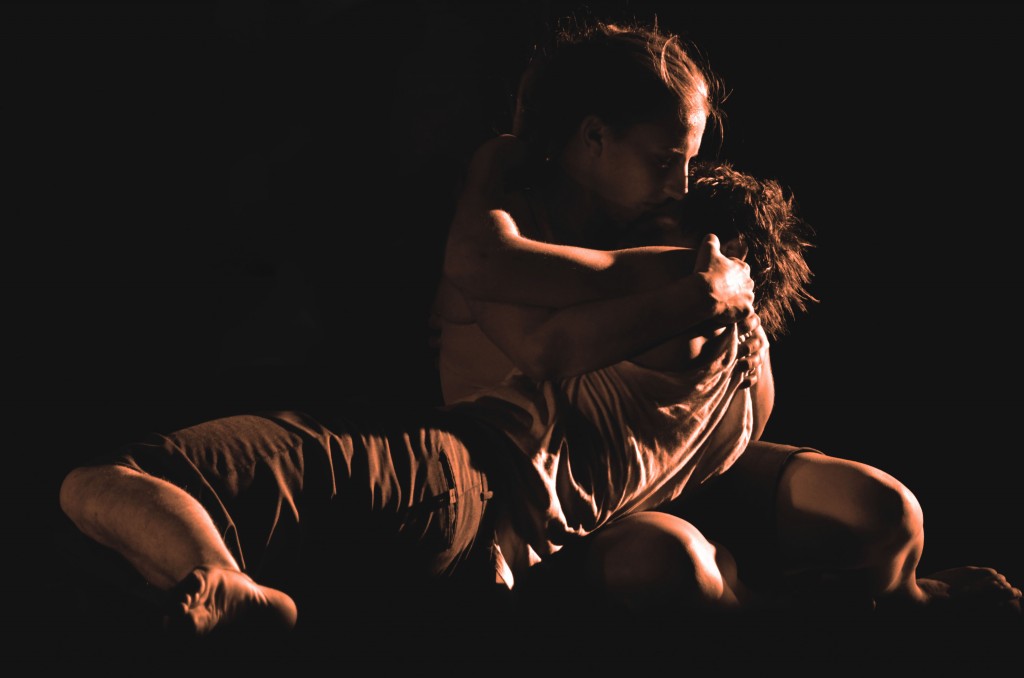 Edinburgh Fringe is the first and largest of the Fringe festivals around the world.  “It’s a place where emerging artists get their start,” Womack said. “It’s also where seasoned artists return, testing new works.”

Rafter talks about her work in a recent interview:

1.  Tell me about your piece and what led up to your going to Scotland.

“Black & Blue” started as a Dance Workshop piece last fall. It was a 10½-minute group work for myself, Dustin Ordway, Isobel McBride ’16, Flora Liu ’15, Samantha Buxbaum ’16, Sari Lesem ’15, and Ryan Rodriguez ’16. I choreographed, and Dustin was pretty much the rehearsal director. Because I knew from the beginning that I wanted fast movement, demanding physicality and full-body lifts, we would need some protection from injury. Unlike CC athletics, the Theatre and Dance Department doesn’t have conditioning or physical therapy. So, with help from CCSGA I hired a strength trainer, Matty Cartee ’12, to train us twice a week. I also consulted with Matt Potter ’14, Will Rudolph ’13, and Ross Calhoun ’14 for wrestling.

“Black & Blue” became half of my thesis show, and I gave it a reflective analysis in my written thesis, entitled “Violence and Transmutation.” Dance faculty selected it to take to American College Dance Festival NW in March. (Ryan and Sari were replaced by Ross Calhoun ‘14). We received good feedback from the adjudicators there.

In the winter, I was applying for anything and everything. I submitted the piece to Danceforms Productions.  They produce dance showcases in multiple American and European locations. A friend of mine, Dolo McComb ’12, performed in this same Ed Fringe showcase several years ago. It was accepted; I think it was the only non-rejection I got. I received a Jumpstart Award, which is a matching grant, from Colorado Creative Industries, to fund it.

I was set to perform in a small festival in Kentucky in late July. Reggie Anderson ’13 was to be my duet partner. In early July, I was informed that the Kentucky show was cancelled, and asked if I would like to perform in the Edinburgh Fringe Festival showcase instead. For Reggie, this conflicted with his Teach for America start date. Dustin was at CC, about to leave for Kazan, Russia, for a dance residency (conducted by Shawn Womack with Dustin as choreographer’s assistant), and I was in Toronto doing the summer program at the School of Toronto Dance Theatre (STDT). Despite all the uncertainties, Dustin and I said yes, that we would accept this opportunity, no matter what.

Fortunately, during graduation week while I was still in Colorado, Reggie and I had made the major group-to-duet modifications together. Dustin and I used Skype, YouTube, and Facebook to work on the choreography. Sharon Moore, who was teaching composition at the STDT summer program, advised me on how to make our intro more effective. So when Dustin got off his Russia-NY-Scotland flight marathon to meet me in Edinburgh, giving us only three days to rehearse the new choreography, we had material ready for him to learn.

The piece itself is about the escalation of violence, and how it takes the act of witnessing and conscious choice to intervene and atone for offenses. It also explores the connection between brutal movements and loving movements, how bad ones can be transmuted into good ones by shifting intention and tempo. The write-up from Fringe Review actually captures it very well. Here’s the copy I wrote for it:

“The seed of offense, planted in a reactive human landscape, escalates from suspicion to aggression to violence. Ultimately, an intervention depends on choice . . . and enables transmutation.  This is the duet adaptation of a work created for six dancers. The narrative was developed with collaborative input from performers. The choreography draws from modern dance methods, contact improvisation, wrestling and Delicious Movement [CC guest artist Eiko Otake’s movement practice].”

2. What is your hometown?

3. What are your plans post-graduation, long-term?

Choreography. I am interested in dance, new media, interactive performance and design, as well as the administrative side of the arts.

4. Shawn mentioned that you’d been invited to join another showcase of emerging artists.  Could you tell me about that?

When the Danceforms show closed, I got in touch with Dance Base, Scotland’s National Centre for Dance. I invited the artistic director to see our duet after we got the good review. I suggested that we do a private showing. In response, she invited us to do a showcase called “Heads Up” on Aug. 16. It’s a showcase for emerging and experienced choreographers, by invitation only, intended for press, promoters and the public. We will be the only Americans. The other participants have more experience than I do (with touring, press or awards) so I will be the most emerging, the newest and youngest in a sense. A little intimidating, but exciting.