The Owl Man of Colorado College Presses On

Reprinted with permission of The Gazette

Brian Linkhart slipped the body of the small, female owl out of a sock. It was the first flammulated owl he had ever touched, and it was quite clearly dead.

The owl, a small bird that lives among the ponderosa forests west of Colorado Springs, fit into the palm of his hand. A mostly mysterious species first caught in Colorado nearly a century before, the female owl was Linkhart’s maiden voyage – the first “flam” that he and his professor, Richard Reynolds, would use to launch the first and really only study of the red-hued owls.

But the 20-something Linkhart was convinced that he had killed her. Her eyelids were shut. Her talons were open and hung loosely from her body. Linkhart shook her – no action.

As the men juggled the owl, she appeared dead. They exchanged glances and Linkhart thought: “This isn’t a good start.”

Reynolds, then a professor at Colorado State University, pioneered the flammulated owl study in 1979, and the following year took an undergraduate student, Linkhart, up into the Pike National Forest to search for the owls. But having gotten his hands around the first owl, all Linkhart could think about it was how it was dead. Puzzling, he set the owl down on the slope they were on, and watched as it rolled away, like a small log, from his feet. He scrambled to catch her — she still looked dead. 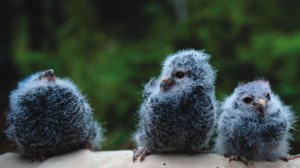 Three baby flammulated owls sit on the leg of Colorado College Flammulated Owl Project researcher Ross Calhoun as he prepares to weigh them. Project leader and CC Professor Brian Linkhart has been working with the flammulated owl for the past 33 years in an attempt to better understand the threatened species.

In a swift movement the owl stood up, looked around, and without a sound flew away. She was playing dead – a defensive mechanism. Reynolds and Linkhart breathed a collective sigh of relief. They never saw the owl again, but she became the first of more than 1,000 owls that Linkhart would go on to tag.

Thirty-three years later, Linkhart and Reynolds were trekking through the twilight of the Manitou Experimental Forest, searching for the owls that have become Linkhart’s hallmark, his passion.

It was late July, a chill, starry night in the forest west of Woodland Park, and Linkhart was in the midst of his annual summer study on the flammulated owls, or flams.

Reynolds had long since retired and just joined his former student for a night in the forest. Linkhart had long since become the foremost, if not the only, flammulated owl expert in the world – possibly everything known about the birds, from their defensive mechanisms to their migratory patterns, has come from his study. Linkhart, a Colorado College professor, strolled through the dark pines on that night with his headlamp off. While he collected a notebook, a pole and camera he can place in a high nest, Reynolds lay down on the forest floor to listen.

It was unnaturally silent.

Colorado College Flammulated Owl student researcher Max Ciaglo sits with a baby owl on his head before taking the mass and measuring the flight feathers of the owlet.

Colorado College Flammulated Owl Project leader, Professor Brian Linkhart, climbs a ladder to retrieve and band a pair of baby owls as other members of his team help.

Researchers with the Colorado College Flammulated Owl Project weigh a baby owl. The researchers have been weighing and taking feather measurements of the babies at three different nest sites in the research area to better understand the development of the species.

July is fledging time for the flams, when the young claw their way out of tree cavities they call home, and flop to the earth below. Little more than grey, sleepy fluff-balls, the owlettes can’t fly, and can’t feed themselves. Instead they will beg for food, perching in the nest entrance or in a nearby tree, waiting for their mothers and fathers to feed them. Yet not a single hungry peep came from this nest in a dead ponderosa pine snag.

Linkhart pushed his camera light and pole, like the antenna of an Anglerfish, up through the darkness and into the nest. Below, he and Reynolds stooped over a small remote screen to watch the owlettes inside the nest. After several minutes, the two owls – if they were owls – didn’t move.

“It’s not typical. We should be seeing movement,” Linkhart said. “It’s not quite right.”

A few days before, the owlettes had been alive, Linkhart said. Worried that the image was blurry, he pulled the camera lens out of the tree, lowered it, and cleaned it. Reynolds went back to lie down, and listen for other owls. But after his second “peep” into the tree cavity, Linkhart was certain. Nothing had changed in the nest. In his field notebook, where Linkhart writes down everything, he wrote: “21:00 – All quiet.”

It reminded him of a nest he found in 2006, when the babies starved to death during a rainstorm that kept their parents away from the nest. “And I don’t think that’s the case here,” Linkhart said. “This nest, for two owlettes to be in juvenile plumage, to have gotten this far, and both suffered mortality in one shot, it seems a little unusual.”

Linkhart stalked off to search for the dead birds’ mother, following her defensive calls. He hoped that she would lead him to a bird that had made it out of the nest alive. But after 30 minutes, he gave up. The bird stopping crying and disappeared into the forest.

“I just think her behavior was just consistent with what a female behavior would be this time of year,” Linkhart said later. “She didn’t have anybody alive left.”

Since the 2002 summer of the Hayman fire, Linkhart and a group of Colorado College students have been spending summers in the Manitou Experimental Forest studying flams.

Their days begin at 2 p.m., and carry on into the early hours of the morning, well after midnight, when the owls are active, hunting and flying around.The 33-year study had become the longest, most in-depth study of the birds worldwide. By this July, it had also brought Linkhart to the 1,000th owl he had tagged for study, a milestone that he and his students celebrated with cookies and champagne. That owl is far from the last. Linkhart would like to see the study continue indefinitely.

When Linkhart and Reynolds began the study in 1980, little to nothing was known about the flammulated owl, named for its flame-colored plumage, and from the Latin word, flamula.

Decades later, Linkhart knows his owls, and their territory. He has seen many owls nest in the same tree for years; he has chased them to Mexico, where in 2012 he determined they were spending their winters. Only twice has he come across inexplicable deaths of owlettes. Rains, starvation, cannibalism have all claimed the lives of the birds – but rarely does disease play a role. The deaths of the two dead owls he discovered in mid-July remain a mystery.

Small as they are, the owls have been key in unraveling some of the secrets of the ponderosa forest where they live. They like older growth forests, which have been cleansed by small wildfires and purged of younger trees. Unfortunately, “small” wildfires rarely happen in the Pike National Forest anymore – instead, there are megafires, like the Waldo Canyon and Hayman fires, that destroy the forest. After each of those fires, Linkhart noticed more owls in the study territory; he believes catastrophic fire pushed them into whatever patches of forest survived nearby.

Just before 3 p.m. on July 15, Linkhart and the crew drove into the forest to begin their day of work. Their work focuses in drainages and gulches where the owls live. In each, they use orange tape to tag every tree, always Aspens, where the owls nest in woodpecker-drilled cavities. Students climb ladders to reach the nests; they plunge their hands into the fist-sized cavity openings and pull the owls out. They carry them to the ground in soft sunglass bags.

The owls are teenagers by midsummer. The students have watched them hatch, weighed them, tagged them, carefully measured their feather lengths, and plucked relatively harmless parasites from their plumage. They are used to being pooped on – “signs of affection,” Linkhart jokes – and the students’ work pants are constantly smattered with owl excrement.

The students retrieve the owls daily. By the time the owls are ready to “fledge” — or leave the nest — there is no chance that their mother will abandon them, Linkhart said. The students and Linkhart would check the nests again that night to glimpse the owls making their first “flight.” By nightfall the owlettes are different creatures — they begin the transformation into nocturnal hunters.

“You know, you see the fledglings during the day, and they are these sleepy little things,” Linkhart said. “But it’s remarkable even on the first night how the behavior starts changing big time, they start getting really quiet, showing adult behavior. If you’re nearby they are not advertising themselves at all.” That night, Linkhart and Reynolds drove deep into the northern part of the study area, called Missouri Gulch, to tag some owls and catch a male, some of whom were carrying geo-locators.

At 1:30 a.m., after all the teams had come back to the lodge, they gathered in Linkhart’s office to debrief the night. They were bleary-eyed, but Linkhart was impressed with their work