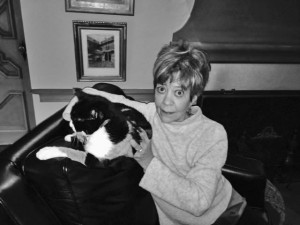 Jeri Hibbard ’04 always knew she would be a perfect fit for Colorado College. She just didn’t get around to pursuing a degree there until she was in her 50s.

Along the way, she spent her life doing what she does best: being creative. She and her husband Ralph raised four children, and as she had time, Jeri attended classes – literature and essay writing at Colorado State University, English at the University of Colorado Colorado Springs, watercolor painting and writing at Pikes Peak Community College.

And along the way, she wrote poetry, which was her favorite way of expressing herself. “I’ve found that poetry is the best way for me to say what I mean, without saying what I mean,” she says, describing her love of metaphors.

So when a friend, who happened to be a professor at CC, urged her to pursue a degree in English on a poetry writing track, Jeri applied…at the age of 57.

“I decided that I was going to stick it out. I had an interview and felt like I made a fool of myself,” she says. “My only question was, ‘Do I have to take math?’ They said ‘No.’ And I was accepted.”

So Jeri embarked on a later-in-life learning adventure, and graduated from CC at the age of 61.

While she was at CC, she perfected her poetry, and even became semi-fluent in Spanish, learning enough to communicate on several trips to Mexico with her daughter.

Today, Jeri continues to write poetry, and after the urging of Jane Hilberry, one of her professors at CC, has developed poetry workshops she presents occasionally to school children throughout the area. “I talk about using poetic tools to make poems fun for children; when they are through, they can use those tools all the way through high school,” she says.

no dream, no remembrance—

empty: this disconnect from the Art of memory.

scritches on paper as mice