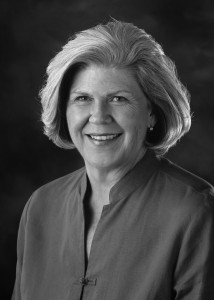 She was director for, then briefly “Miss Diane” on TVs “Romper Room,” an early educational show for children.

She was executive director of the Colorado Opera Festival and brought grand opera productions to Colorado Springs.

She even had her own talk show on Colorado Springs television for 12 years, and interviewed luminaries like Woody Allen and Anthony Hopkins.

But, reflecting on her interesting career path, Diane Benninghoff says that there is a common thread — “creating relationships and connecting with people.” And she says many of her most satisfying relationships have been built at Colorado College, either as a student, a staff member, or as a volunteer.

For 28 years, Diane Brown Benninghoff ’68 has worked building and nurturing relationships at CC, originally as alumni director and most recently as assistant vice president for advancement. She will retire from CC in mid-January 2014.

The fine arts and drama major who graduated in 1968, says, “I have made lifelong friends as a result of CC. My life was transformed by attending CC. And many of the alumni, parents, faculty, and staff with whom I have worked share that feeling about CC, and that made it natural for us to develop true and deep friendships. We all believe in CC and what can happen here. That’s a pretty good basis for a friendship.”
Diane grew up in Greeley, Colo., and in her family, it was a given that she would attend the University of Northern Colorado after graduating from high school.

However, that changed when childhood friend Terry Winograd ’66 returned from his first year at CC gushing (and Terry was not a boy prone to gushing) exclamations.

“You have to go to CC! You will love it!” It’s the greatest place in the world — life-changing!

And with a little help from the Boettcher Foundation, she did. And it was.

“I feel really lucky to have come to CC,” Diane says.

Diane also met her husband, Ted Benninghoff ’68, at CC. “He sat at the other end of the dinner table freshman year. I thought he was cute. I still do.”

Over the years, one of Diane’s and Ted’s greatest passions has been river running. They began running rivers together in 1972 and have been doing it ever since, sometimes in kayaks, sometimes rafts. In the late ’80s, in addition to her own personal trips, Diane began organizing and accompanying groups of CC alumni and parents on river trips, first on the Yampa and Middle Fork of the Salmon, and since 1989, down the Colorado River through the Grand Canyon. She made 15 such trips.

The trips through Grand Canyon helped launch Diane’s most recent passion — as a poet. A river poet, specifically. She writes about what she knows, which is rivers — their waters, people, critters, rocks. 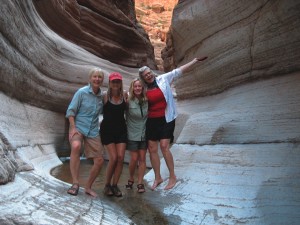 “That’s Jane Hilberry’s fault,” she says. Hilberry, professor of English who teaches poetry and creative writing at CC, came along on one of the Grand Canyon trips and guided participants in writing poetry. “Jane said the magic words: ‘Use concrete language.’ That made all the difference for me. And now, I can’t stop,” said Diane.

Why is it called a tongue?

The shape, I suppose —
wide at the back, narrowing
to a point
and making its point with its tip.

But more than shape —
smooth
sensual.

Suspended at the top, we begin to slide —
Still smooth, so smooth.

Gentle swells carry me
in
down
along
fast
faster
then — the explosion.

One Response to Diane Brown Benninghoff ’68