Jessie Ayers ’15, one of the most decorated players in the 30-year history of Colorado College women’s soccer, was selected by defending champion FC Kansas City in the third round of the 2015 National Women’s Soccer League College Draft, held Jan. 16. 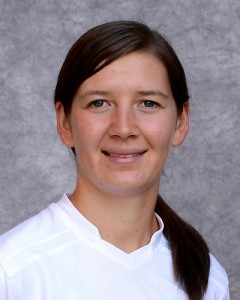 Ayers, the 26th overall pick, is the first Tiger ever drafted by an NWSL franchise.

“It’s a little bit intimidating, but mostly exciting,” Ayers said. “I’ve watched them play and they look like a really fun group. They are tactically sound and really quick on the ball, so I couldn’t be any more excited.”

Ayers finished her CC career tied for third in program history with 32 career goals and tied for fourth with 74 points. She also struck for 10 game-winning goals and set up the deciding goal on five occasions.

“What a great day for Jess and CC soccer,” head coach Geoff Bennett said. “I am so proud of Jess and how hard she has worked for this.”

Among her many honors, Ayers was named to the Missouri Athletic Club’s Hermann Trophy Watch List the past two years and was selected to train with the U.S. Under-23 Women’s National Team in June 2014. The native of Seattle, Washington, was named a second-team all-American by the National Soccer Coaches Association of America in 2012 and was one of only four underclassmen among the 32 players to earn a spot on the first or second teams.