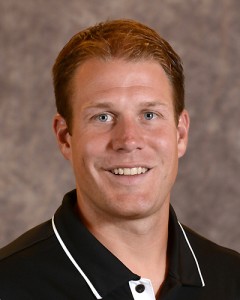 Scott Palguta, who served the last two seasons as an assistant coach with the CC men’s soccer team, has been named the third coach in program history, Athletics Director Ken Ralph announced Feb. 6.

Palguta, who succeeds Horst Richardson, emerged as the favorite during a national search.

“I want to thank Ken Ralph and Greg Capell [senior associate athletics director] for giving me this opportunity,” Palguta said. “None of this would have been possible without Horst’s mentorship over the last two years. I’ve learned a great deal about being a college soccer coach, but specifically being a college soccer coach at CC. Thanks to his efforts and taking me under his wings, I feel very well prepared.”

Palguta played four seasons as a defender with the Colorado Rapids of Major League Soccer and was part of the 2010 team that won the MLS Cup.

“From the team’s perspective, we’re excited to have a coach who is on the same page as the players and is ready to attack the upcoming season,” said midfielder Caden MacKenzie ’17.

A native of Toms River, New Jersey, Palguta was a two-time all-Ivy League selection at Cornell University, where he earned a bachelor’s degree in hotel administration in 2005.