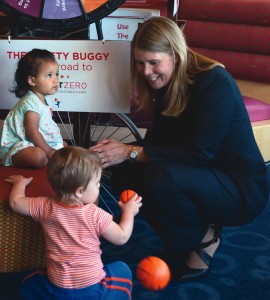 Jena Hausmann ’93, knew one thing for sure when she graduated from high school: Whatever she did with her life, it had to matter.

That mantra eventually propelled her through two decades in healthcare administration and in May 2015, to a top job as president and CEO of Children’s Hospital Colorado, ranked the fifth best children’s hospital in the nation in 2015-16 by U.S. News & World Report.

“I had been looking at the East and West Coasts. The traditional list,” the Kansas native says, even though Colorado College was in the neighboring state. “When I found CC, it took me all of 30 seconds to say that’s where I wanted to be.”

Hausmann was attracted to CC’s liberal arts program, small class size, and the Block Plan’s deep immersion in one topic at a time, she says. “It was so intriguing in its uniqueness.”

To lay the groundwork for making a difference in the world, Hausmann decided to pursue a political science major. She believed that public office was her ticket to provoking change.

“Right away at CC, I was thinking, solving problems,” she says. “I read. I wrestled with different points of view. You’ve got to have discipline for that. And there was a problem-solving approach there that I think I carry with me today. I think it was created in those CC classrooms.”

But a junior-year internship in Washington, D.C., convinced her she was wrong about politics. Hausmann surmised that politicians, even those on a national stage, were simply unable to effect the kind of fundamental change that was her aim.

As she started her senior year in 1992, healthcare was a hot topic — thanks, in part, to presidential debates between George W. Bush and Bill Clinton. So she began to follow the issue through the lens of political science. Hausmann also saw the subject from a personal vantage point: Her grandfather was wading through the healthcare system as he battled cancer.

“This is an inhumane way to die,” Hausmann remembers thinking. “It was a broken system. How do leaders in this field allow this to happen?”

After graduating with a bachelor’s degree in political science, she earned a master’s degree in healthcare administration from the University of Minnesota.

She chose that route because, as she says, “I’d seen how much of an effect a leader is going to have on the healthcare experience.”

In 2008, Hausmann was named one of the 12 “rising healthcare management stars” by Modern Healthcare magazine.

“Healthcare, the industry, is in an extreme transition,” Hausmann says. “The political pressures, all the dynamics of trying to transform healthcare in this country. It’s a time when you have to approach it like a village. For me, that was a really important skill set.”

And Colorado College was built on that notion: think, reason, and work together.

“The way we would learn, particularly in political science, was extraordinary,” Hausmann says. “We’d go read Plato or Hobbes or Locke or whatever. Then we’d get together as a class … and talk it out. … That environment took my natural tendency to work with others, to challenge and debate, and fostered it.

“There was so much teamwork at CC. It really helped create the fabric of how I like to lead.”

To current and future students, she says, “I would tell them to absolutely cherish the time they have at CC. … Don’t view it as four years that you check off the list and say, ‘Now what?’ There’s so much to learn about relationships, about life there. There’s so much more than the content you learn.”