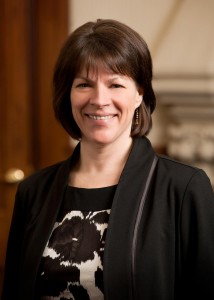 When Harlene Hayne ’83, P’17 became the vice chancellor at the University of Otago in Dunedin, New Zealand, in 2011, she didn’t think it should be a big deal that she was the first female to hold the position.

“But then,” she says, “I realized that this university was already a trailblazer with respect to educational opportunities for women,” explaining that it was the first in Australasia to admit women (in 1871) and that  Caroline Freeman — the first woman to earn a degree — walked six miles each way between her home and class.

People often ask Hayne how she ended up in New Zealand in the first place, halfway around the world from Colorado, and it’s a story she loves to tell.

As post-doctoral fellows in psychology at Princeton University, Hayne and her husband Mike Colombo frequently browsed job openings in academia. They had made the decision to never take jobs apart from each other, but they thought it would be difficult to find an institution that would hire a pair of married psychology professors at the same time.

One morning, they saw the notice for the University of Otago, talked it over, sent in their CVs and references, and were contacted immediately by the then-head of the psychology department, Geoff White. White said that not only did Otago already have six other couples on staff, but that he would be quickly pulling together a hiring committee for Hayne and Colombo.

The university hired the couple within a week, sight unseen, but they needed to see the place first, so they traveled to Dunedin for a visit when Hayne was seven months pregnant with their first child — a fact that didn’t dissuade the hiring committee one bit. White actually had the opposite reaction, Hayne recalls. “He said ‘wow, that’s fantastic’ and proceeded to explain about the university’s on-site daycare. The university has always understood that you can have ambitious careers and a family life at the same time.”

The university and the city of Dunedin felt like home, and in January 2017, it will be 25 years since Hayne and Colombo first arrived in Dunedin with their new baby. Hayne started in the psychology department, eventually becoming the department head, then the deputy vice chancellor for research and enterprise  (a position she took over from White), then the vice chancellor, recently accepting another five-year term.

During her two decades at Otago, she has published more than 100 book chapters and journal articles on the subjects of memory development and adolescent risk-taking, and she established Uni Crew, a volunteer program for students. She is the chair of Fulbright New Zealand and also sits on a committee that reports to New Zealand’s prime minster on adolescent issues. In April 2016, to honor Hayne,  the Otago University Rowing Club christened their new boat the “Harlene Hayne.”

Colombo, meanwhile, is the current chair of the psychology department. Over the years, the couple has conducted research, supervised students, and even written a book together.

“Mike and I were determined to work together, and it all worked out,” Hayne says. “And our work is not just our work; it’s our life. We don’t have a work/life balance; we have a work/life blur, and our kids always understood that.”

And they must still understand. Older daughter Marea, who once swore she would never study psychology, is now a Ph.D. candidate in psychology at Otago. Younger daughter Sara started in the “family business” as a psychology major but later switched to religion and Islamic studies — at Colorado College.

Hayne, who says she was “heartbroken” when her time at CC came to an end, is happy that Sara has now found a home there. Hayne is impressed with the block system, the small classes, the connection with the professors, and the overall liberal arts education. She loves it so much, in fact, that she always thought she would someday return to Colorado College and teach, but now she knows that her life and her work are in Dunedin to stay.

“I have loved every second of my career,” she says. “I’m lucky to be one of those people who can say, ‘Oh my god, I get to go to work today!’”