Marika Viragh ’13 saw 5th block break photos on CC’s Instagram and was inspired to send one as well. 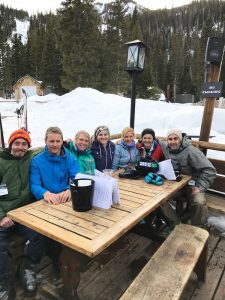 A few members of the Class of 2013 got together for a block break of their own (except post-CC it’s called “a long weekend”) and ran into two groups of CC alumni in Taos, New Mexico. Enjoying après ski are, from left, Sean O’Keeffe ’13, Tom Weaver ’13, Viragh, Carter Vettese ’12, Hollis Moore ’13, Hannah Peterson ’13, and Daniel Wright ’13. The photo was taken by Patrick Lynch ’15, who was with another group of folks from his class.

Says Marika, “We first saw him and a few others when we got off a chairlift at the top of the mountain, skied a few runs together and parted ways but then ran into their entire group again at a restaurant at the bottom of the mountain at the end of the day. We saw them the next night at dinner in town. There were also three other CC-ers I know of at the same mountain that weekend. Small world!”