Enabling Challenging Discourse: Being an Editor at Cipher Magazine 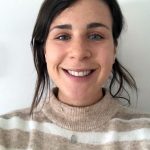 The Cipher magazine has been a huge part of my life ever since my sophomore year at Colorado College. As a creative writing major, I knew as a freshman that I wanted to get involved in some kind of campus publication. At Cipher, there is a tremendous amount of flexibility — articles range from covering the protests at the Dakota Access Pipeline to a reflection piece about recovering from a traumatic experience.

Often, and this is our goal, certain Cipher articles incite discussion and debate among students and professors. The magazine publishes articles that aim to question and challenge everyone. Financial aid, suspensions, new policies from the administration — nothing is off limits, nor should it be. Being an enabler of this discourse is one of things I am most proud of from my time at CC. 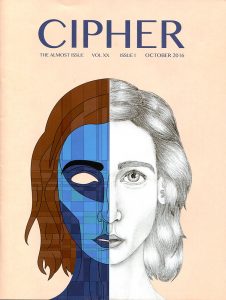 Cipher features student voices and news on and off campus, is published once a block, and features a different theme every issue. In the past, we’ve published the Faith issue, the Desert issue, the Almost issue, the Technicolor issue, and the Daddy issue. There are usually nine to 15 articles in an issue, but they do not necessarily all have to stick to the theme — it’s more of a loose suggestion. In the past, the magazine won the prestigious National Pacemaker Award. Administered by the Associated Collegiate Press, the award is given for excellence in American student journalism. It’s unofficially known as the Pulitzer Prize of student journalism, and is awarded based upon the quality of writing/editing, design, content, concept, photography, art, and graphics. 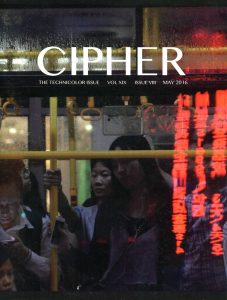 A lot goes into making an issue of Cipher, but it all begins with the “pitch meeting.” Held on the first Monday of the block, the meeting kicks off the publication cycle. It is essentially an open brainstorming forum that meets in Worner Center. Anybody is welcome to contribute an idea, or just come to watch. For this past block’s “Toxic” issue, ideas ranged from “Toxic Masculinity” to the quality of water coming from Colorado College’s water fountains. I didn’t write an article for that block, but oftentimes do contribute as a writer as well as an editor. Most recently, in the Faith issue, I investigated Penrose Hospital’s sponsor, the Catholic Health Initiative (CHI), and analyzed the merits and faults of religion and healthcare. My idea originally stemmed from an interest in hospital chapels and turned into something much larger. 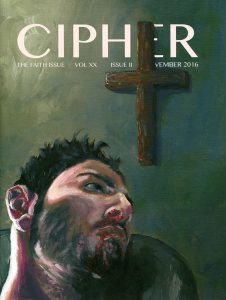 Over the course of the block, five editors, including myself, were assigned writers and worked with them to produce their best possible work. The first weekend of Block 4 was “publication weekend,” when the editors sit down to actually produce the magazine. Starting after class on Friday, and then all day Saturday and Sunday, we read, re-read, and re-read again all the articles for the issue, fine-combing each for any structural and grammatical edits. The Associated Press style guide is open on the table the entire weekend, easy access for the constant stream of questions from editors hunched over a piece; “Is mid-60s supposed to be hyphenated?” “Is New York Times italicized?” We order in food — this weekend everyone voted to get Taste of Jerusalem — and power through draft after draft, falafel in hand. It’s an intense three days, but then, a week after that Sunday, the magazine comes in and it’s all worth it. Teams distributed it across campus, carefully placing them in Armstrong, the ModPod, Spencer Center, the first-year dorms, and anywhere else with any surface space at all. Our web editor simultaneously publishes the issue online at (www.ciphermagazine.com).

I’ve always been interested in publishing as a future career, and being an editor at Cipher has affirmed this passion. Last summer, I applied to several publishing internships in New York City, and somehow got into the internship program at HarperCollins publishing. I was so excited to see what the real world of publishing was like. It was an incredible experience, and I’ve taken back everything I’ve learned and applied it to my work at Cipher, and beyond.