We asked Professor of Chemistry  Ted Lindeman ’73, What’s on Your Reading List? 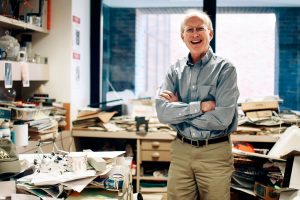 Climbing conditions on Pikes Peak were appallingly nasty on Dec. 31, 2010. It was of no concern to a sane person, but that didn’t apply because I hiked with the AdAmAn Club*, with which I have spent 47 of the last 50 New Year’s Eves. With all phone batteries dead, all drinking water frozen, frostbite setting into dozens of toes, and goggles uselessly iced up, the last nine or 10 of us still ascending turned around, 1,200 feet short of the summit, convinced that the club would recover from this defeat sooner than it would if we left dead climbers on the high rocks.

For me, that close brush planted a need for research: How many times, if ever, had the Pikes Peak weather been so wretched on that particular day of the year? The quest led me to Phyllis Smith’s “Weather Pioneers: The Signal Corps Station at Pikes Peak” for an account of the building and operation of the highest weather observatory in the world, which was on the peak from 1873 to 1888. (That decade and a half of measurements was rescued from obscurity by the Harvard Observatory’s annals, to provide the best continuous record of summit weather we have.) Smith offers colorful characters, benighted bureaucrats, opinionated mules, and a nascent tourist trade in addition to her tale of indomitable summit weather soldiers, earning this little book a spot on my shelf. That research result: AdAmAn probably encountered a “once in a century” horrible Dec. 31.

*The AdAmAn Club, a Pikes Peak tradition since 1922, is a group of mountaineers who climb the 14,115-foot Pikes Peak in order to set off fireworks at the summit on New Year’s Eve. Each year, one member is added to the group, hence the name AdAmAn (add a man).