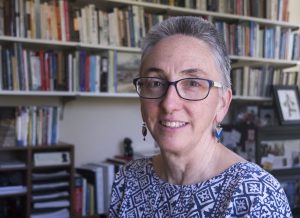 When I’m not reading sociology, I love reading for my European Book Group at the Alliance Française in Denver. Because only 3 percent of the American book market comes from translations of works written elsewhere, we read from that small portion, focusing on books written in languages spoken in Europe. Sometimes that includes books from Francophone writers in Tunisia or Angolan authors writing in Portuguese, but most of our books, all novels, come from European writers, and cover a wide range of themes.

Our next book is “Crabwalk” by Günter Grass, a semi-fictional account of the real 1945 Soviet attack on the Wilhelm Gustloff, a German cruise ship carrying “refugees” (hundreds of Nazi soldiers with thousands of innocent children) away from crumbling Nazi Germany. The story is told from the perspective of a man who was born immediately after his mother was rescued from the shipwreck, as he struggles with Germany’s post-war memories. After that, the reading list will take us through Sweden, Bulgaria, and Italy. It’s sort of like the Block Plan – one book from one language/culture/nation each month.

For titles and reviews of books from the full 3 percent (well beyond Europe), go to http://www.rochester.edu/College/translation/threepercent/.

I can’t remember all of the books since we started in 2011, but I’ve kept the list and would be happy to share it via email.

Recently we read Per Petterson’s “It’s Fine by Me,” a coming of age story about a working class boy in Norway, a demographic I had never really thought about. We’ve read Dominique Fabre’s “Guys Like Me” about a middle-aged man looking for a second chance at life and love in the outskirts of Paris — fun for anyone who loves to explore the lesser known parts of Paris. Before that was one of my favorites, Andrey Kurkov’s Ukrainian novel, “Death and the Penguin,” a hilarious and dark story about a poverty-stricken writer in Kiev whose only friend is his penguin — impossible to summarize in one sentence, but you’ve got to be curious at least!