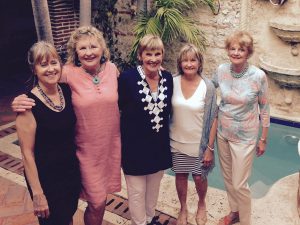 Merle Ricklefs has been named a member of the Order of Australia. Membership was granted “for significant service to tertiary education, particularly to Asia and Pacific research and scholarship, and to the development of programs for indigenous students.” Merle enjoyed a long career in academics, including serving as a history professor at the National University of Singapore and as founding director of the Melbourne Institute of Languages and Societies at the University of Melbourne. He also authored various books. 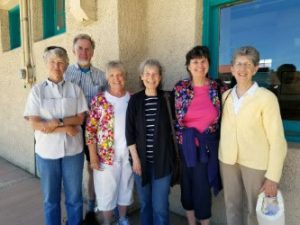 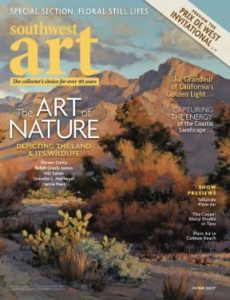 Darcie Swenarton Peet was honored with the cover story in the June 2017 issue of Southwest Art magazine. The story (searchable at southwestart.com) details Darcie’s lifelong love of seeking and painting wild places. From Aug. 15 through Sept. 23, she is scheduled to exhibit paintings at the Hockaday Museum of Art in Kalispell, Montana. The following month, she plans to be at CC for a celebration of its alliance with the Colorado Springs Fine Arts Center.

Kathryn Phelps Lovell has received the 2017 Lester J. Evans, M.D., CHM Distinguished Service Award from the Michigan State University College of Human Medicine. She was commended for dedication to teaching, innovative development of educational materials, research in both basic sciences and medical education, and service to the college, university, and national communities.

Margaret Myers earned the Distinguished Alumni Award from the Volgenau School of Engineering at George Mason University. Margaret was George Mason’s first female engineering Ph.D. graduate, in 1988. She has since achieved the Army rank of colonel; served as principal director for the Department of Defense deputy chief information officer; and directed the Institute for Defense Analyses’ Information Technology and Systems Division, among other achievements. 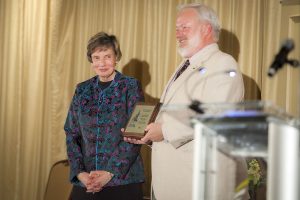 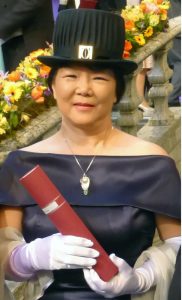 Margaret Ann Liu has been awarded an honorary doctorate from Karolinska Institute in Sweden, recognizing her frontline research and education within the field of DNA-based vaccines. A Harvard Medical School grad and one of Discover Magazine’s 50 Most Important Women Scientists, Margaret has made fundamental findings regarding the interplay between gene expression and immune responses. She is a foreign adjunct professor at Karolinska and an adjunct full professor at the University of California, San Francisco. She also holds an honorary D.Sc. from Colorado College. 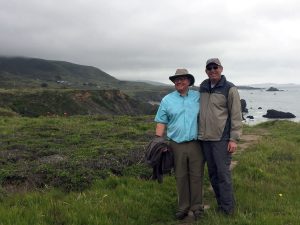 Peter Eliot and Peter Rubens met in April 2017 for a hike on the Kortum Trail at Sonoma Coast State Park in California. 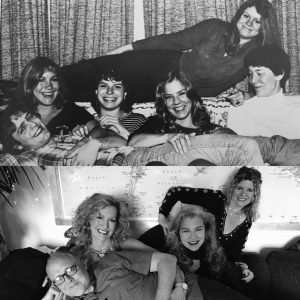 Last September, Jeff Church, Allison Arnold Minnick, Jann Dubois, and Lisa Lomond-Ogden reunited at Lisa’s home in Los Angeles — and decided to re-create a picture (fondly known as “Jeff and His Harem”) taken during their senior year. The original photo features Lisa on the back of the couch; Allison, Colleen McKinney White, Jann, and Anne McClellan McKinzey (left to right) sitting on the couch; and Jeff lying across. While they regretted that Colleen and Anne couldn’t attend and make the picture complete, they report a great time was had by all.

Camille Bzdek Blakely has earned a 2016 American Advertising Federation Silver Medal Award, given to professionals “who have made outstanding contributions to advertising and who have been active in furthering the industry’s standards, creative excellence, and responsibility in areas of social concern.” Camille is partner and president of Blakely + Co., a full-service marketing and advertising agency in Colorado Springs.

In their 29th year of marriage, painters Josh Adam and Susan Adam together run the Adam Gallery in Castine, Maine. They have painted in France, Greece, Nepal, and elsewhere, and recently had their work shown at the Rick Faries Gallery at the Masterworks Museum of Bermuda Art, where they served for a time as artists in residence. 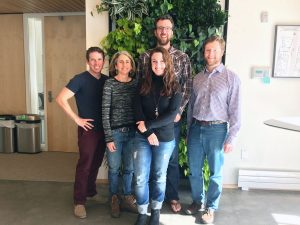 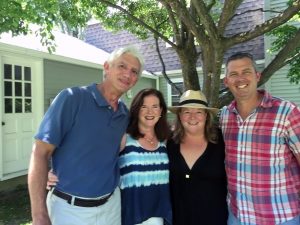 Sisters Ginny Sisson and Mimi Sisson Bean ’96 recently reconnected at the house in which they grew up — and where their parents still live — in New Canaan, Connecticut. Pictured left to right: Bruce Scott, Ginny, Mimi, and Nathan Bean. 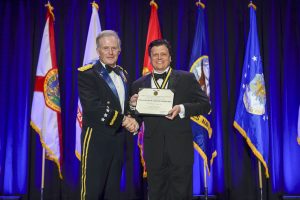 William “Bill” Natter III recently received the United States Special Operations Command Medal, given for “outstanding support to Special Operations Forces from 1993 to 2011.” Bill has worked as a professional staff member and staff director within the House Armed Services Committee, as the deputy under secretary of the Navy, and as a civilian consultant. He says he views his recognition “as a victory for the entire CC philosophy of liberal learning, as without this experience I could not have achieved what I have achieved.” 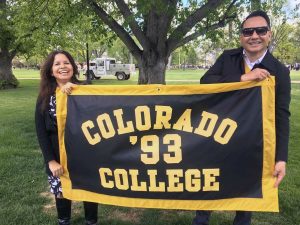 Felix Sanchez ran into one of his best friends from college, CC classmate Natalie Carrillo, at the 2017 Commencement. Natalie’s niece, Aurelia Carrillo ’17, is the fourth woman from the Carrillo family to graduate from CC. Felix and Natalie grabbed the Class of ’93 alumni flag for a photo right before it was put away for the year. 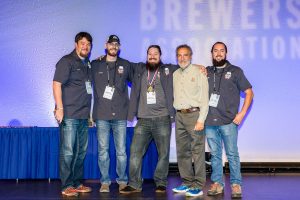 David Kim and Leslie Blaugrund Kim ’95 are living in Albuquerque, New Mexico, where both teach at Albuquerque Academy. After 17 years teaching high-school science and 10 years as dean of students for Grades 10-12, David is now teaching seventh-grade math. Leslie is currently teaching ninth-grade history. Outside of education, David and Leslie co-own Boxing Bear Brewing Company —named Mid-Size Brewpub of the Year at the 2016 Great American Beer Festival and third-best brewpub in the country in a recent USA Today poll. In the photo taken at the festival (top), David is on the far left. In the brewery photo (bottom), David and Kim (second and third from left, respectively) are joined by visiting CC friends (from left) Jean Ferguson Steimel ’95, Karen Baker Nathan ’95, and Lori Walter ’95. 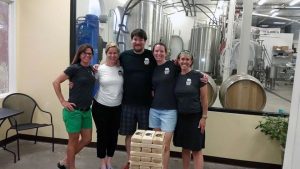 John Gomez recently celebrated his first feature film being shown at the Cleveland International Film Festival. “When I Stutter,” a documentary, explores the psychological implications of stuttering and elucidates some of the mysteries behind the communication disorder. (The film trailer and information are online at whenistutter.org.) John moonlights as a filmmaker; he spends his days as a speech pathologist in Los Angeles public schools and will be teaching a graduate-level course on stuttering at California State University at Los Angeles in 2018.

Sorrel Brae has joined Native Content, a boutique film production company based in Los Angeles. Sorrel himself is based in New York. Films that he has written and/or directed have been featured at festivals in Paris, Brooklyn, Hawaii, and various points in between.

Sumer Ortiz has opened a Denver-area food truck called Mama Said, which serves Southern food and promotes farm-to-table and local food. Her website is at mamasaideat.com, and the truck has a presence on Facebook, Instagram, and Twitter.

MASS Design Group, an architectural firm co-founded by Alan Ricks, was awarded the Cooper Hewitt National Design Award for the book “Justice Is Beauty,” about the firm’s projects in Rwanda, Haiti, Malawi, the Democratic Republic of Congo, England, and the United States. The featured projects further the idea that “great architecture is not a luxury but a right,​ and that the search for beauty in our world is a commitment to the search for human dignity.” Alan is chief operating officer at MASS.

At the Tribeca Film Festival this spring, Mike Shum and his team earned an Audience Award for “Hondros,” their feature-length documentary about award-winning photojournalist Chris Hondros, who was killed in 2011 while on assignment in Libya. Shum, who lives in Denver, served as film producer and director of photography.

In September, Angela Eastman and Maxime Robillard ’12 will make up two-thirds of a team exhibiting an art performance at Dlectricity (dlectricity.com), a light-based art and technology festival in Detroit. Examples of Angela’s work can be viewed at angelaeastman.com, and Maxime’s work at maximerobillard.com. 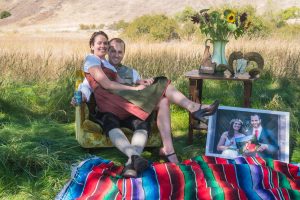 In August 2016, Jessica Van Doren and Lukas Ulrich Van Doren got married — wearing traditional Bavarian attire — in Boise, Idaho. They met while Lukas worked as the cultural program coordinator for CC’s German House, and moved to Germany together after Jessica’s graduation. 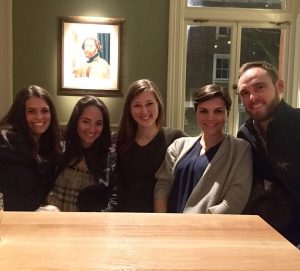