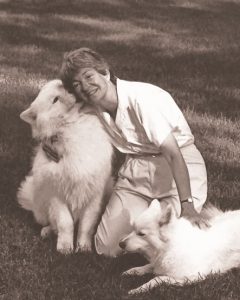 Barbara Maurin Arnest, Feb. 15, at age 93. After winning the V.F.W. Ladies Auxiliary national patriotic essay contest in 1941, Barbara attended the University of Minnesota. She worked as a reporter for the Minneapolis Tribune, where her interview subjects included artist Bernard Arnest, whom she would soon marry. They came to Colorado Springs in 1957, and Barbara edited CC’s alumni magazine from 1960 to 1975, during which time it won numerous regional awards and, in 1970, the Atlantic Award for the nation’s best college alumni magazine. In the 1990s, she served as president of CC’s Woman’s Educational Society. Bernard (former CC professor and chair of the art department) preceded Barbara in death. She is survived by children Lisa Arnest Mondori ’72, Paul, and Mark, and three grandchildren.