The Summer Bulletin has just come and I’ve read most of it with strong interest, as usual. Seventy six years ago this month I entered CC as a freshman, took up residence in the Wood Avenue house with 12 other young women from five or six states, and signed up for classes.

This Bulletin features field trips and I was immediately reminded of my experiences at CC. One class was Geology “101.” I thought the mountains would be interesting to study. We went on at least one field trip, to find shark’s teeth sandstone, an amazing revelation. It was hard to imagine those tall mountains under water. Well, I have a miniature rock garden of stones found on the beach of Lake Michigan, colorful reminders of the Ice Age, when glaciers brought them down from up north.

The CC music department put on operas and I was in the chorus of two of them. One was Mignon. We took it up to Leadville to perform in the old opera house. That was quite an experience for it was up, perform, and back down to CC late at night. The opera house was looking its age, but had posters of famous people who had performed there, truly a “history” field trip, as well as a musical one.

I turned 18 at CC and three days later was the “infamous” Dec. 7, 1941 event at Pearl Harbor. Soon Camp Carson was built. Construction workers and then soldiers filled the town. I was a member of Lyrichorus, a student-run musical group, directed by Bill Goodnight, who was also an accomplished football player on the Tiger’s team. One day we drove out to the camp to perform for the soldiers, [it was probably in the ’42-’43 year]. We sang popular songs by Cole Porter and others. Halfway through our performance there was a terse announcement over the loud speaker and a group of soldiers left the room. When finished, we bowed to hearty applause and returned to our cars, only to find the back seat of one car smoldering on the ground probably due to a carelessly discarded cigarette. Just as today’s CC students perform volunteer activities, so did we, a “field trip,” in World War II.

I took the class in Far East history and at the end of the year our Professor Malone, who had taught in China at the American University, invited the class to his home for a Chinese dinner, served with chopsticks. We had the challenge of learning to use them to eat the soup and other dishes. Fortunately, he did not grade us on this field trip performance.

I left CC after two years to take training at the Philadelphia School of Occupational Therapy and to finish college life at the University of Pennsylvania, ED, ’46. CC was my first time away from home. I had friendships for over 50 years with a few of my classmates and have always remembered with great appreciation the teachers, students, and classes. CC is vastly changed from my days, with the new buildings, different curriculum, diversity of students and teachers. We did have a Chinese student and those Canadian hockey players… … One more note. A former CC student, Chelsie Adams, ’96 [CA, MD] married my nephew David S. Warner. They have six children and live in Kohler, Wisconsin, where he is the director of Wade Historical Site and she is a lawyer in the legal department of the Kohler Co. Please excuse an old lady’s [93] ruminations, in a retirement home. Rah, Rah! CC. 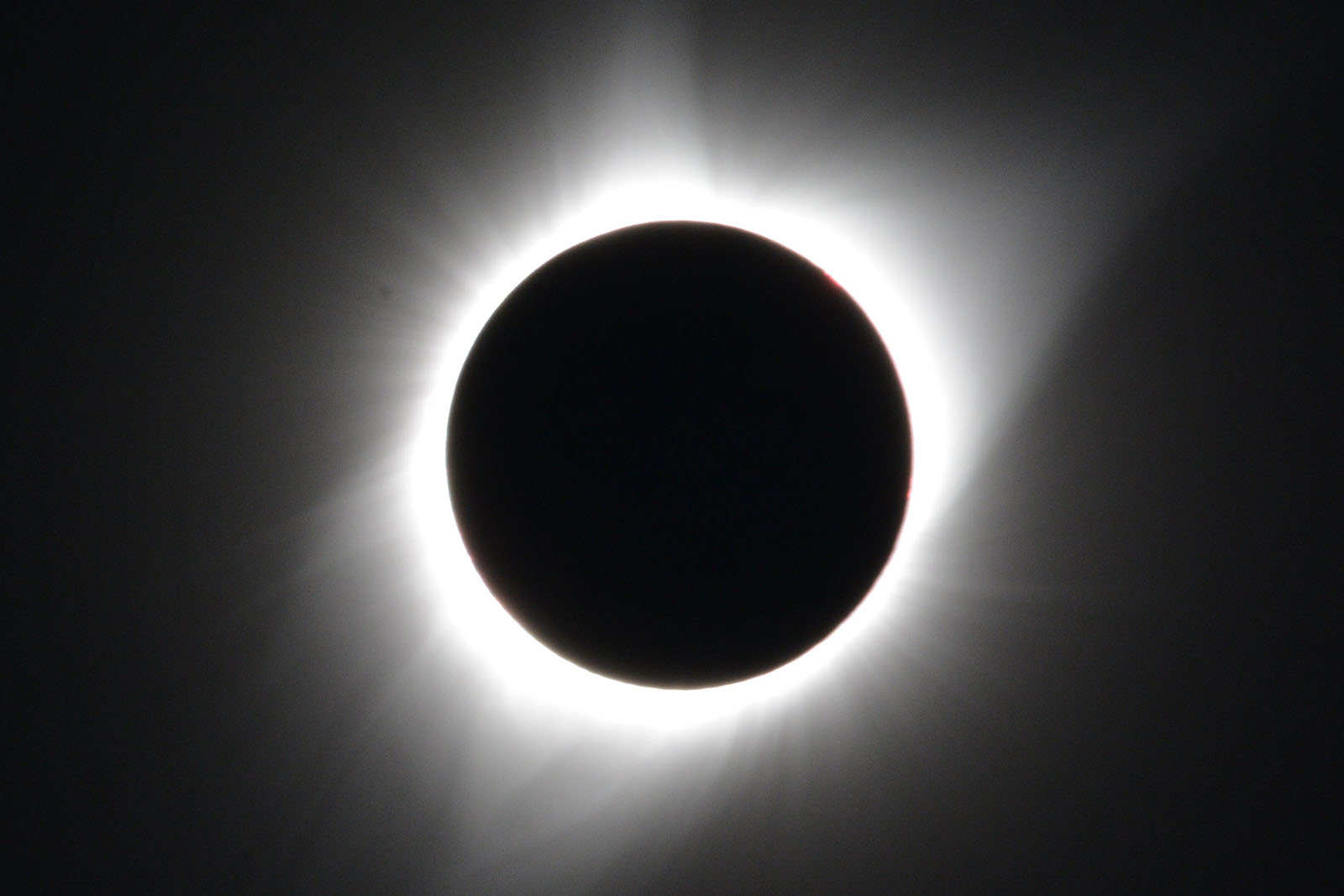 In August, Jerry Macon and his wife, Carol, joined 36 others in a trip organized by the Office of Alumni and Family Relations to Jackson Hole, Wyoming, to view the solar eclipse. Professor of Physics Shane Burns gave a lecture the day before the eclipse, and during the eclipse, Jerry captured several images as it phased. For a camera, he used a Nikon D5200 with a Sigma 200-500 mm zoom lens set at 500 mm. For a solar filter, he used one side of solar eclipse glasses taped to the open end of a plastic Wendy’s cup. 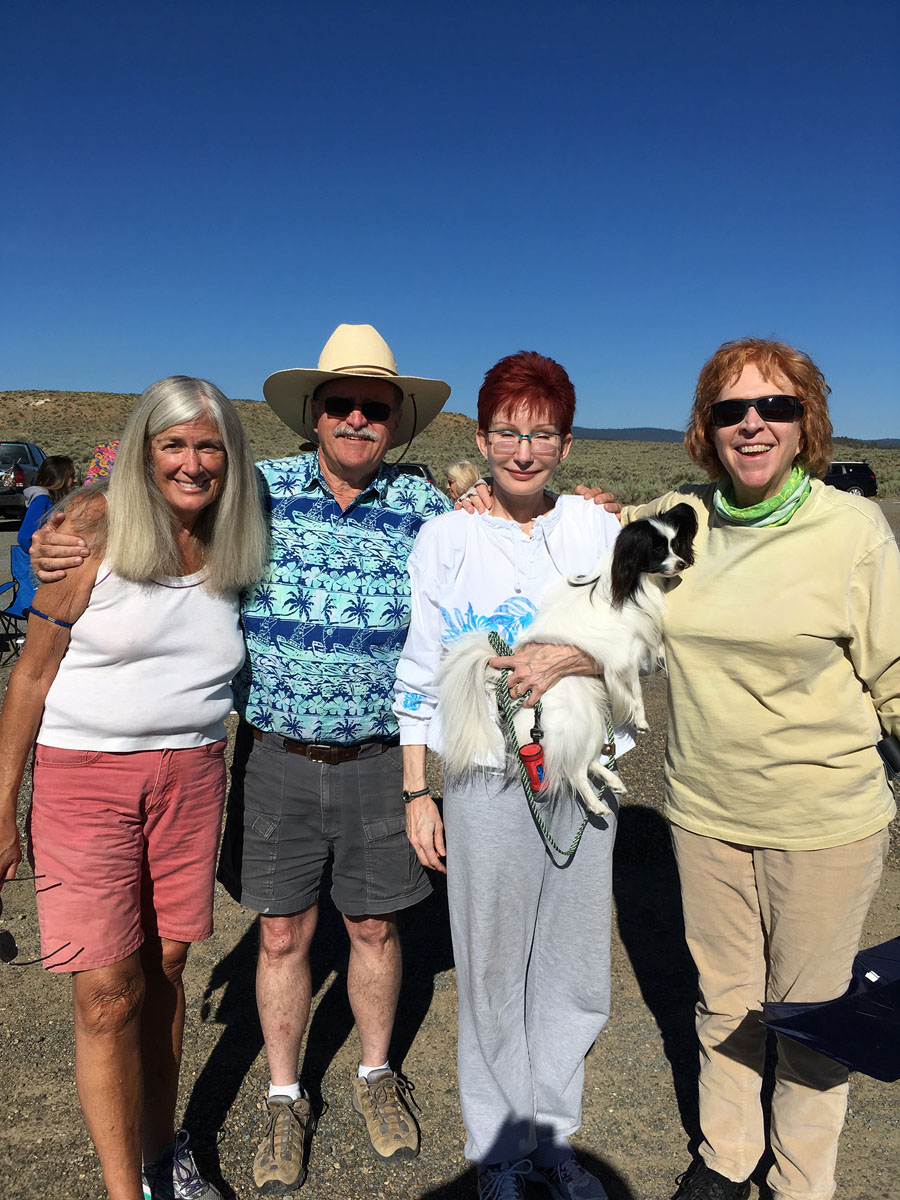 Carol Barton Sager returned to live again in Colorado with her husband, James, in June 2016. They now reside in Longmont, where they are enjoying retirement and closer proximity to friends and family.

In July, U.S. President Donald Trump nominated Mark Norris, Sr. to serve as a judge on the United States District Court for the Western District of Tennessee. In addition to serving as special counsel in the Memphis office of Adams and Reese LLP, Mark has been in the Tennessee Senate since 2000, serving as majority leader since 2007. 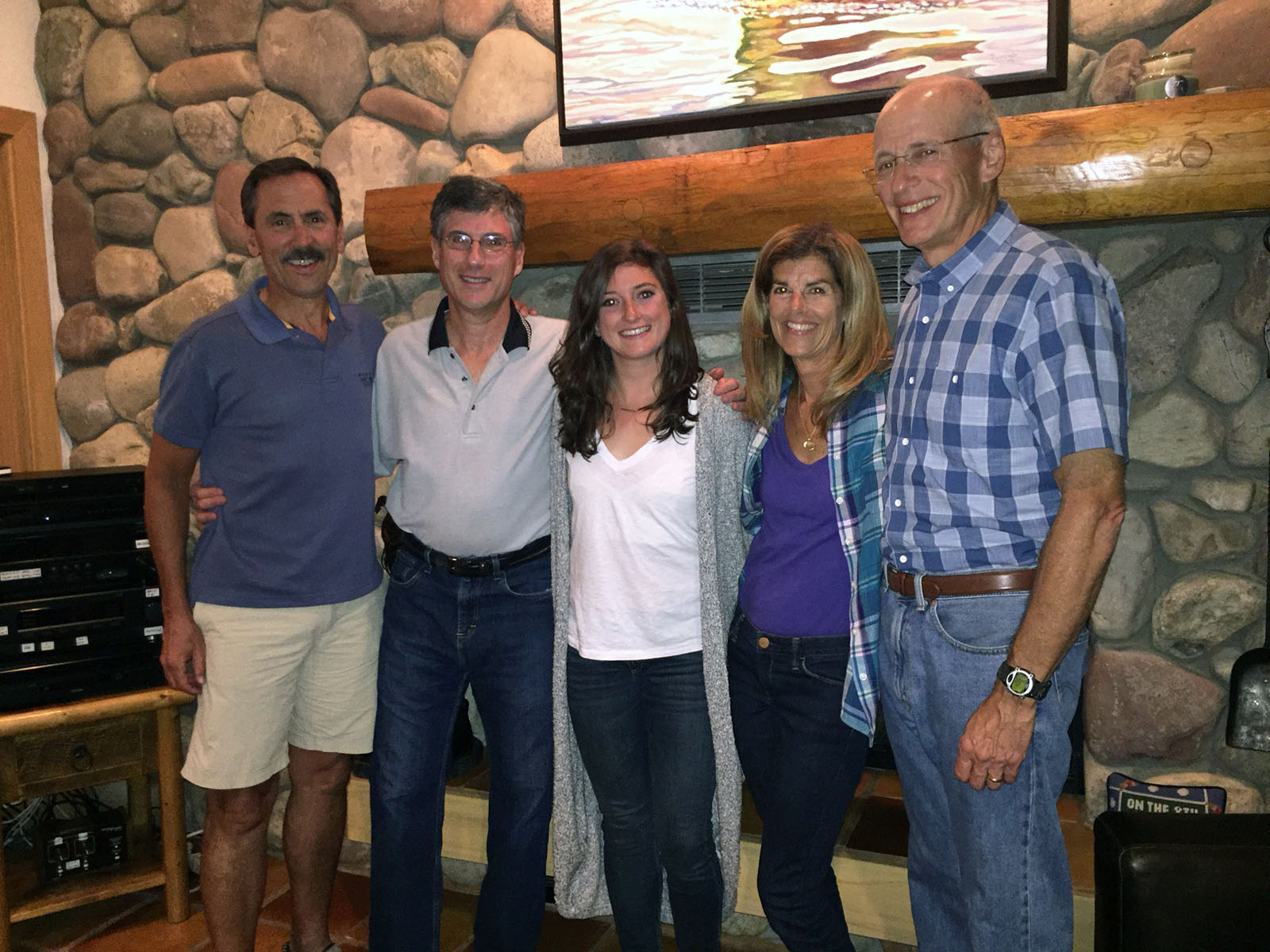 Linda Crout Spevacek reports that with her husband John’s retirement, they are now splitting time between lakeside summers near Traverse City, Michigan, and Gulf shore winters in Naples, Florida, with frequent fall trips to the national parks. Friends are welcome at either location! Contact info: spevacek1@gmail.com. 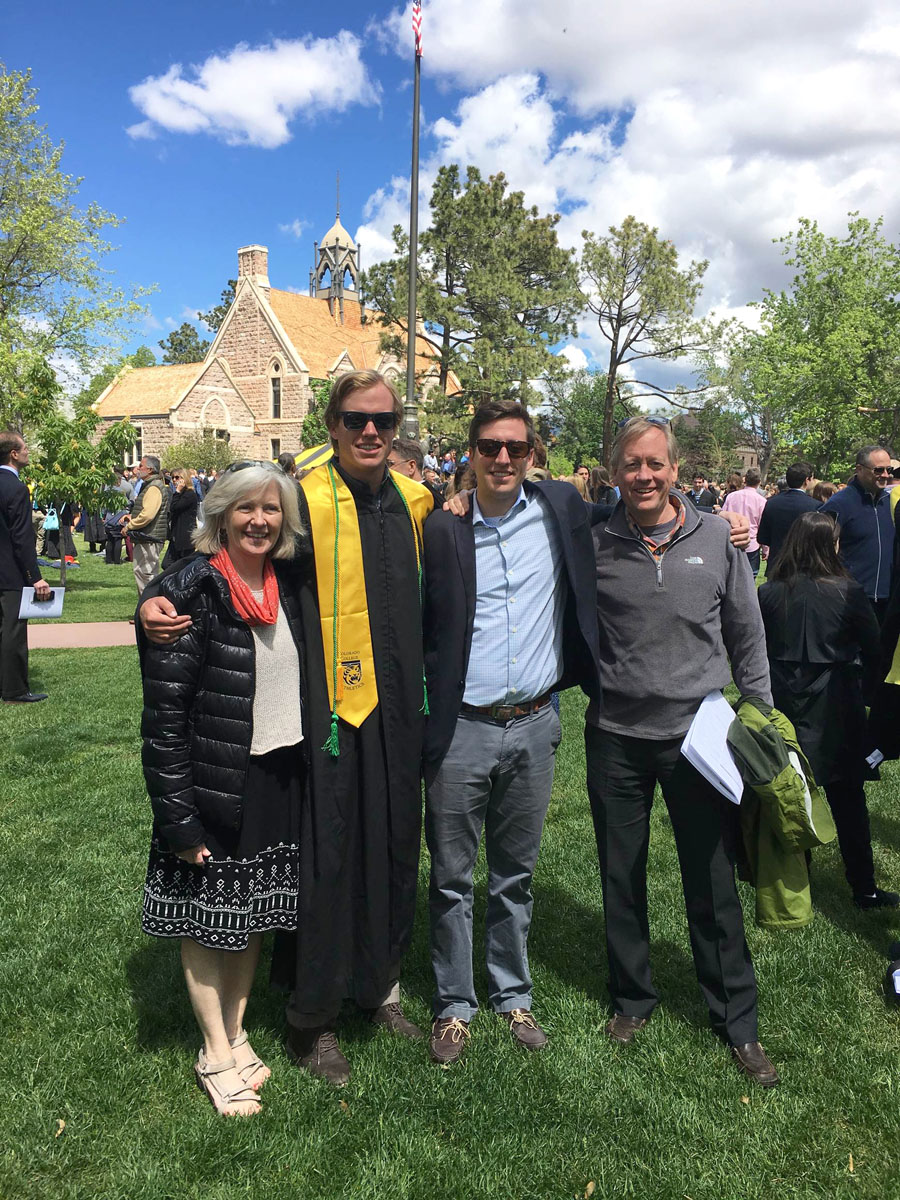 In January, Ellen Stein was promoted to serve as editorial page editor at The Durango Herald, a news organization serving Southwest Colorado. She joined the Herald in July 2016 as editorial writer and member of the editorial board. Ellen credits CC with teaching her to write well and think critically, two skills that prepared her for work in conservation, media and development, and her latest venture. Reach her at estein@durangoherald.com.

Below, from left to right: Kimberly Race ’88, Karen Kay Simmons ’88, Lori Johnson ’89, and Maryrose Kohan ’88 gathered in Washington, D.C., this past January to celebrate Lori’s departure to Albania to work with the U.S. Foreign Service. 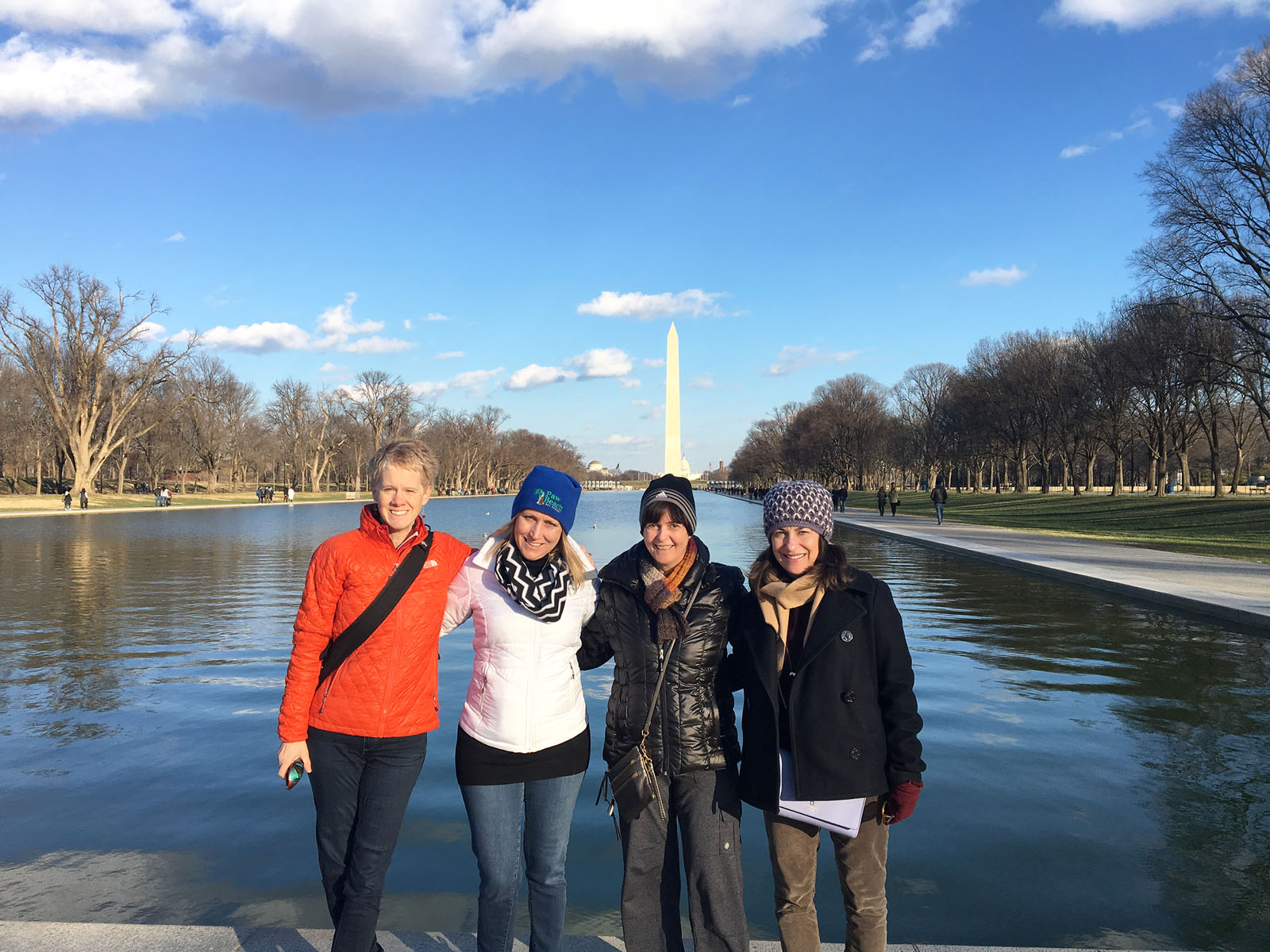 Ginny Sisson ’88 and John Katsanis ’87, below, connected a few months ago in New Canaan, Connecticut, after almost 30 years. Ginny reports that John is doing great — happy in his new role as a retired principal with two beautiful daughters — and that she is “hitting her stride” as well. 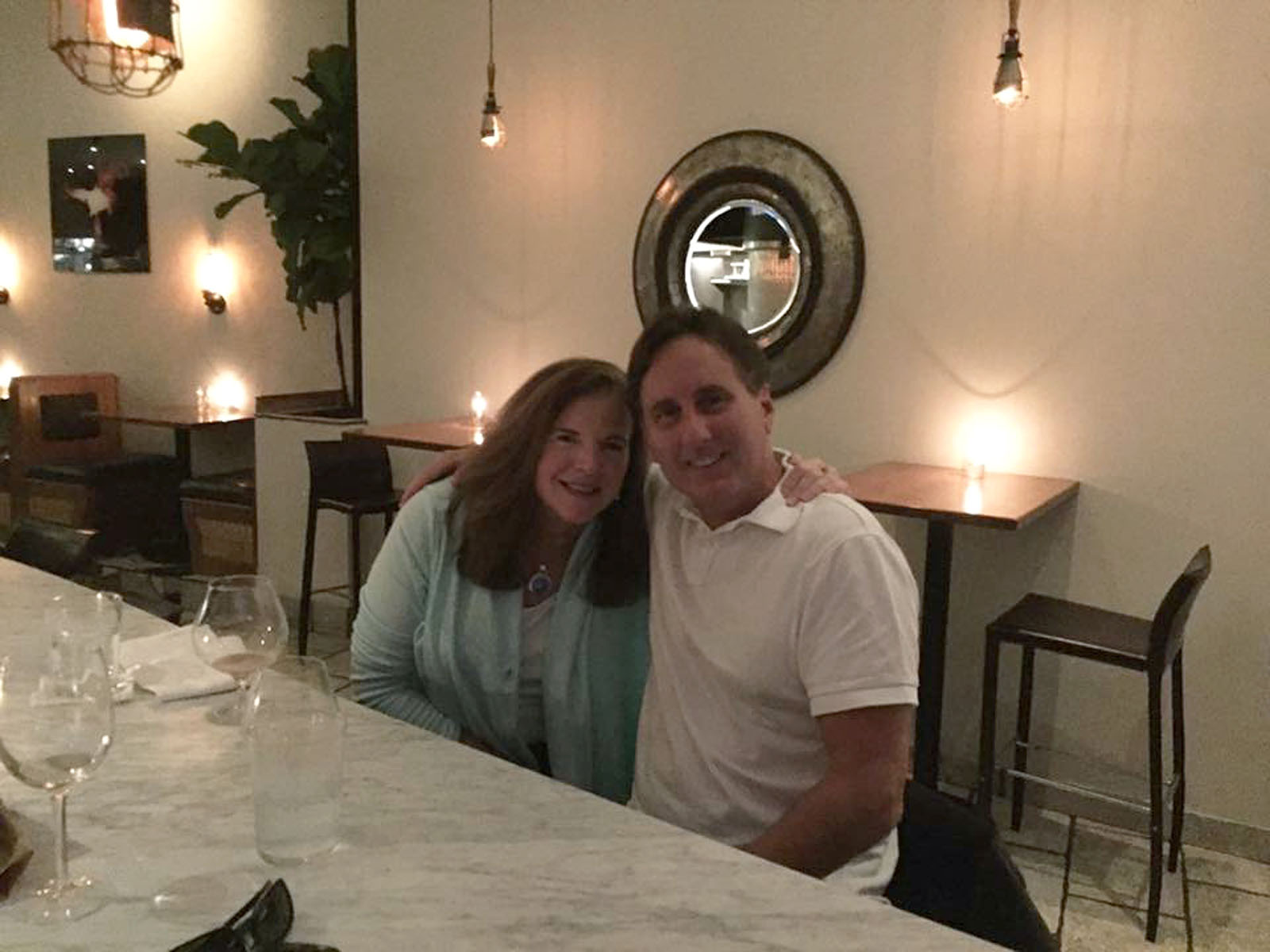 Shannon M. Kos has been included in the 2018 edition of Best Lawyers in America. She specializes in product liability litigation for Collins Einhorn Farrell PC, in Southfield, Michigan. 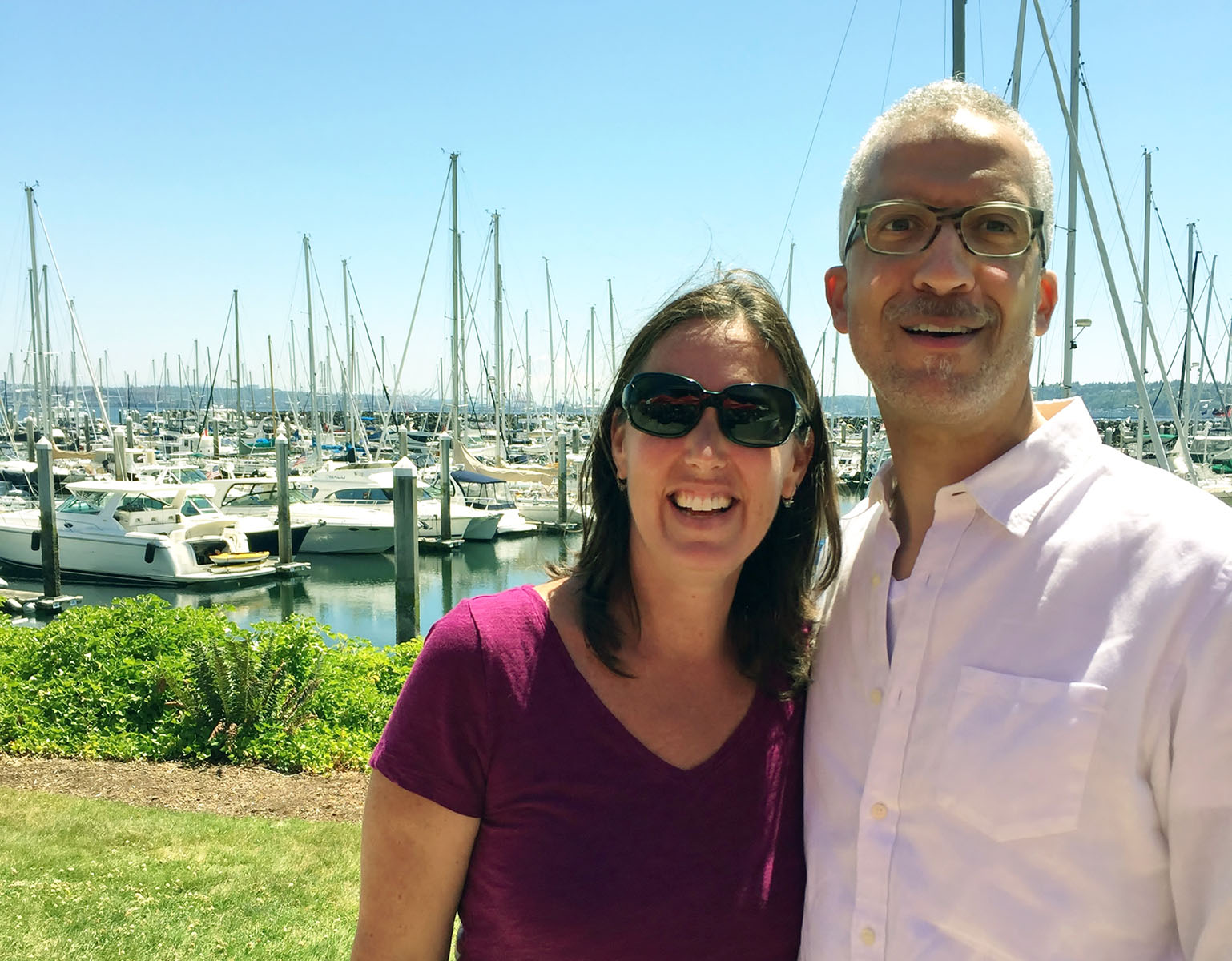 World traveler Jen Haefeli, above, stopped by Seattle in July to visit her buddy, psychologist David Markley ’91. They dined al fresco at a local marina before Jen sailed to Juneau, Alaska.

In July, Greg Hamilton married Kim Ryan, above, on Whidbey Island in Washington state. Greg is a documentary filmmaker known for “The Movement,” which reached Sundance and 21 other festivals, and “Power of the River,” featuring a river trek in Bhutan. He proposed to Kim, an elementary-school special education teacher, in October 2016 in Manitou Springs after the pair visited CC for a celebration of the life of his adviser, Marianne Stoller. Wedding guests included Candice Urban ’95. 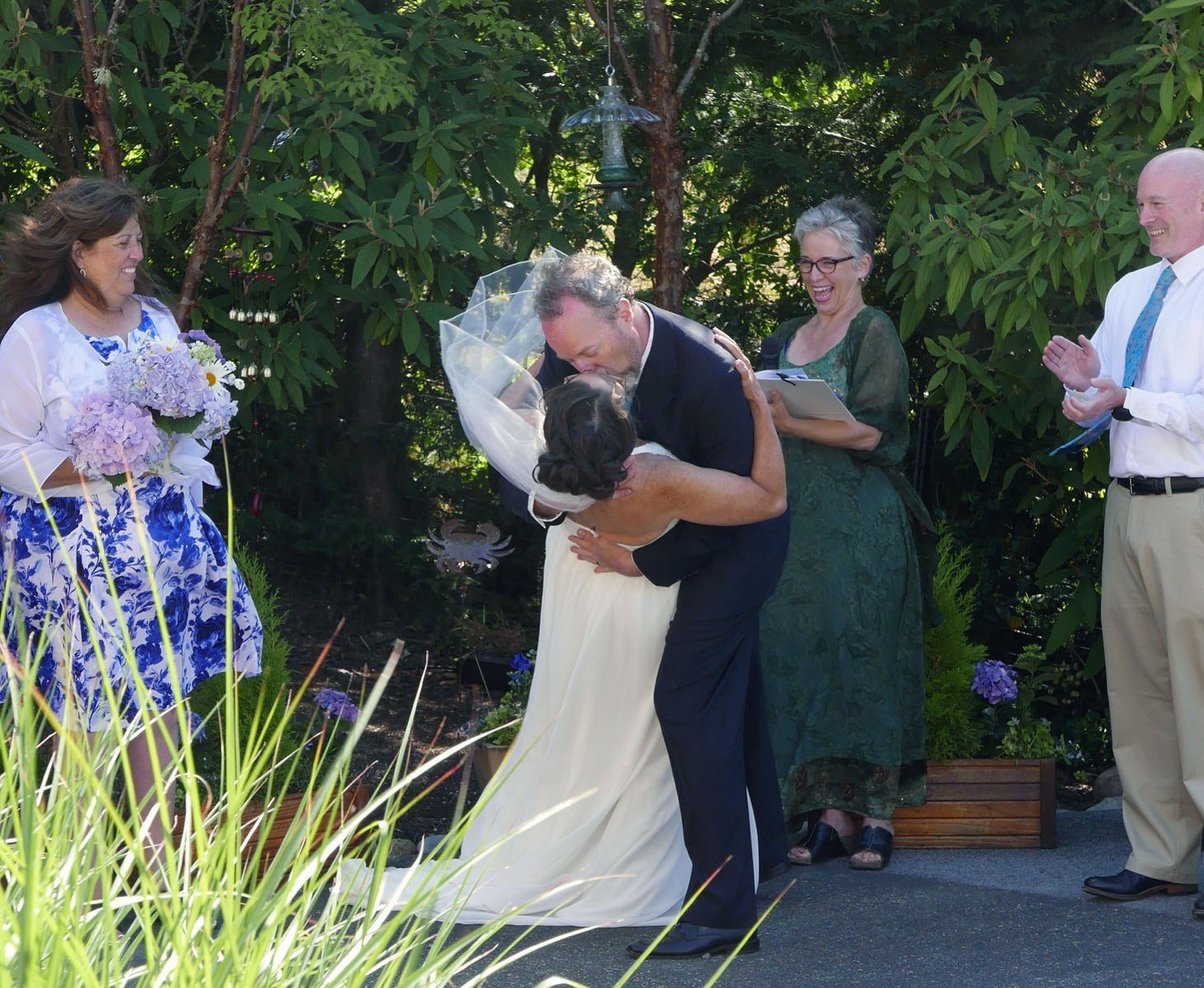 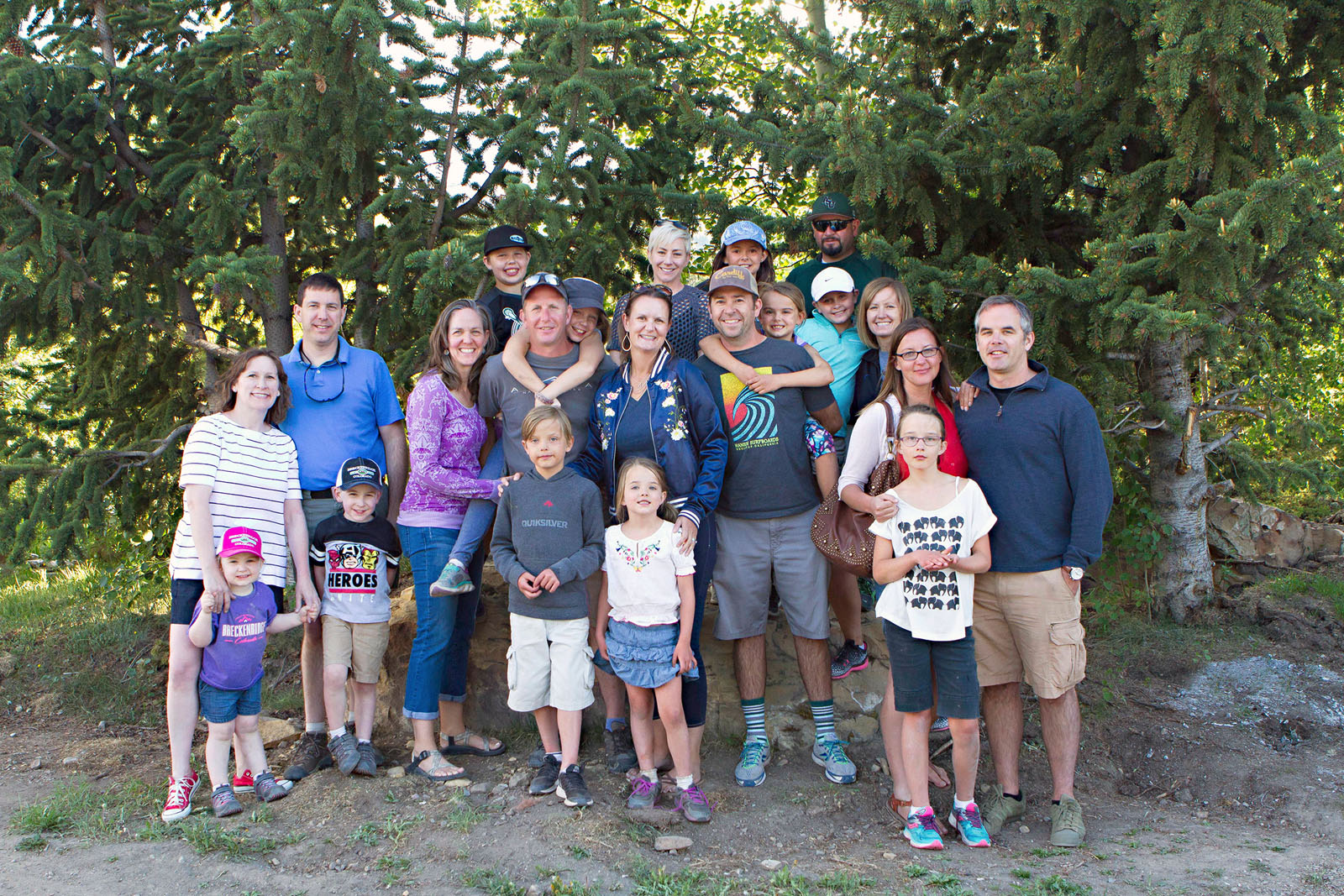 Alicia Farley Johnston has been named a principal of Portland, Oregon-based investment firm Arnerich Massena. Alicia, the company’s director of human resources, has been with Arnerich Massena since 2009. On a more personal note, she married fellow 2001 alumnus Peter Johnston in December 2015 in Portland.

Sarah Schuster Moyer has been named director of the Louisville Metro Department of Public Health and Wellness in Louisville, Kentucky. Sarah, who has graduate degrees from Temple University School of Medicine and Dartmouth College, was formerly the department’s medical director.

Iain Hyde has assumed the role of director of the Colorado Resiliency & Recovery Office, which supports and empowers Colorado communities to become stronger, safer, and more resilient in the face of natural disasters and other economic, environmental, and social challenges.

Matt Zaba has been named goaltending coach of Nebraska’s Tri-City Storm in the United States Hockey League. Matt spent the last two seasons as a volunteer assistant coach at CC, following an eight-year professional career. He is the co-founder of Mountain High Hockey, where he specializes in working with goaltenders. 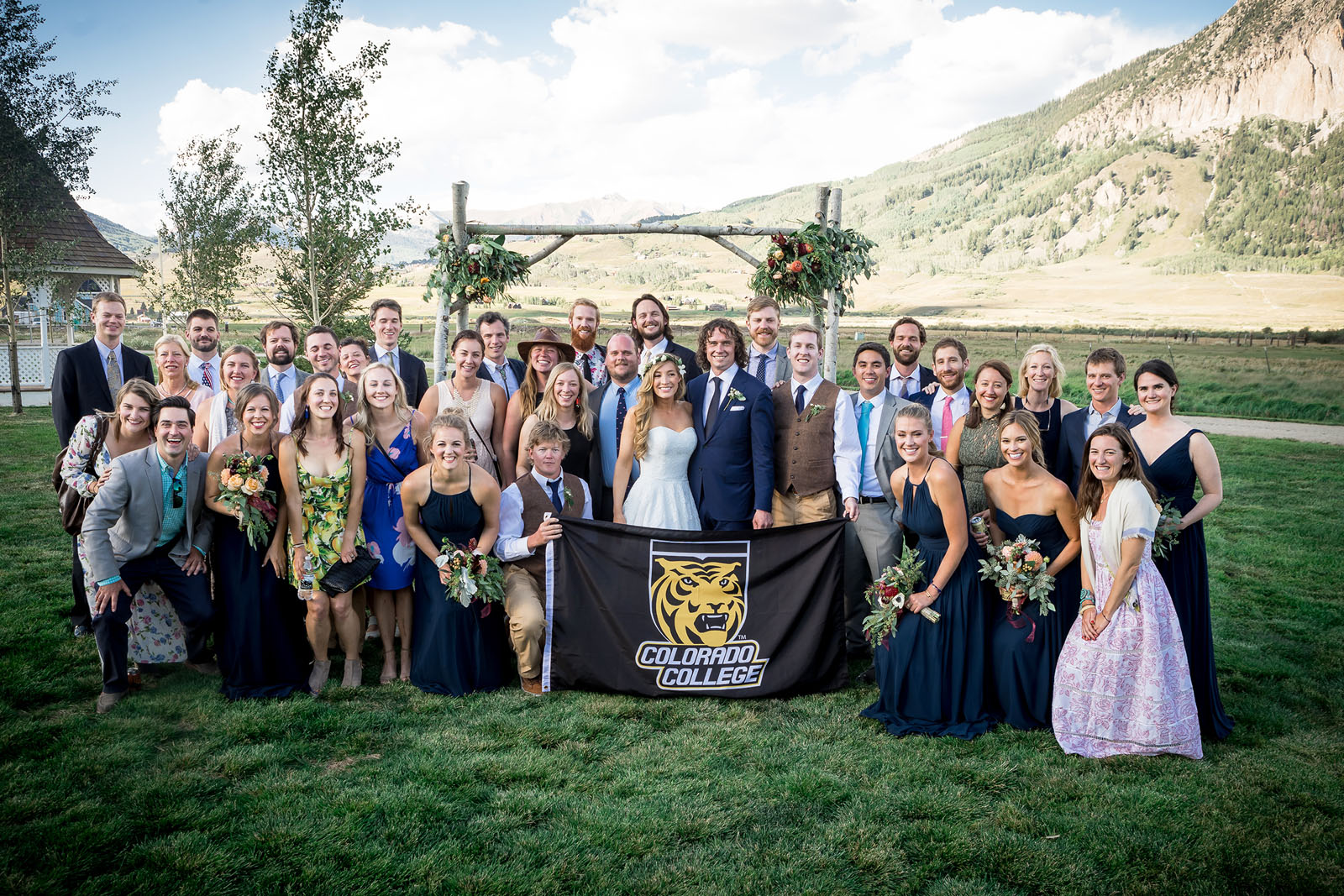 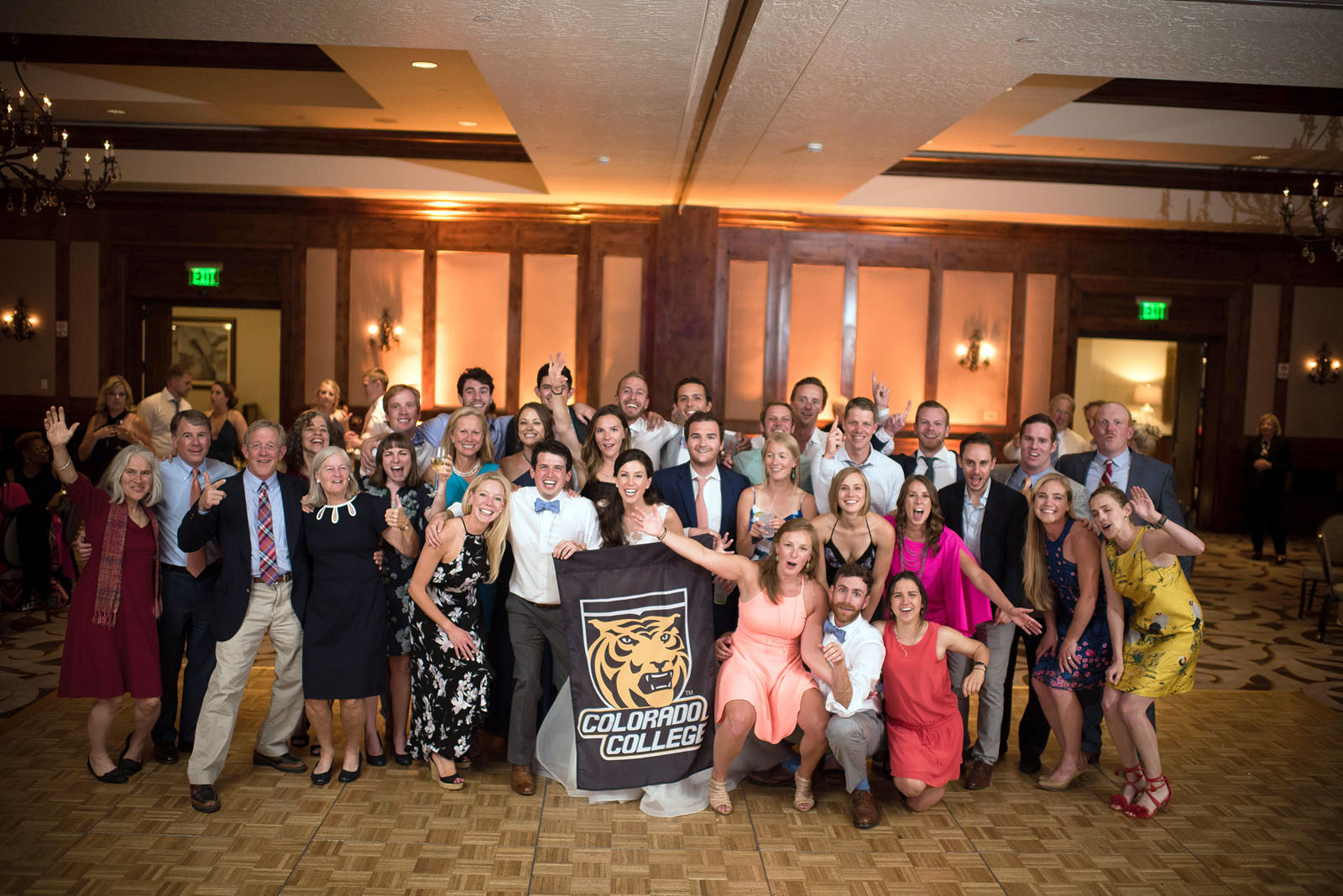 Hollis Moore recently installed her “Pulse Flow” project along the Rio Grande Gorge as part of NeoRio, an annual outdoor contemporary art and community event in Taos, New Mexico. Including a 16-foot papier mâché canoe and a participatory papermaking and printmaking station, “Pulse Flow” is designed to prompt conversations about management of rivers in the Southwest U.S. Hollis and her collaborator will embark on a journey in the paper canoe in the Colorado River Delta this winter and will exhibit the project at Albuquerque’s Open Space Gallery in April. Hollis is an MFA candidate in printmaking at the University of New Mexico. Follow her project blog at: pulseflow.weebly.com

Julia Lawton and Peter Maiurro ’05 participated in the groundbreaking of the United States Olympic Museum and Hall of Fame on June 9 in Colorado Springs. After working together at El Pomar Foundation between 2015 and 2017, Julia and Peter have gone on to serve as executive administrative assistant and interim chief operating officer, respectively, for the museum. They work under the direction of board chair and former Colorado College president, Dick Celeste. 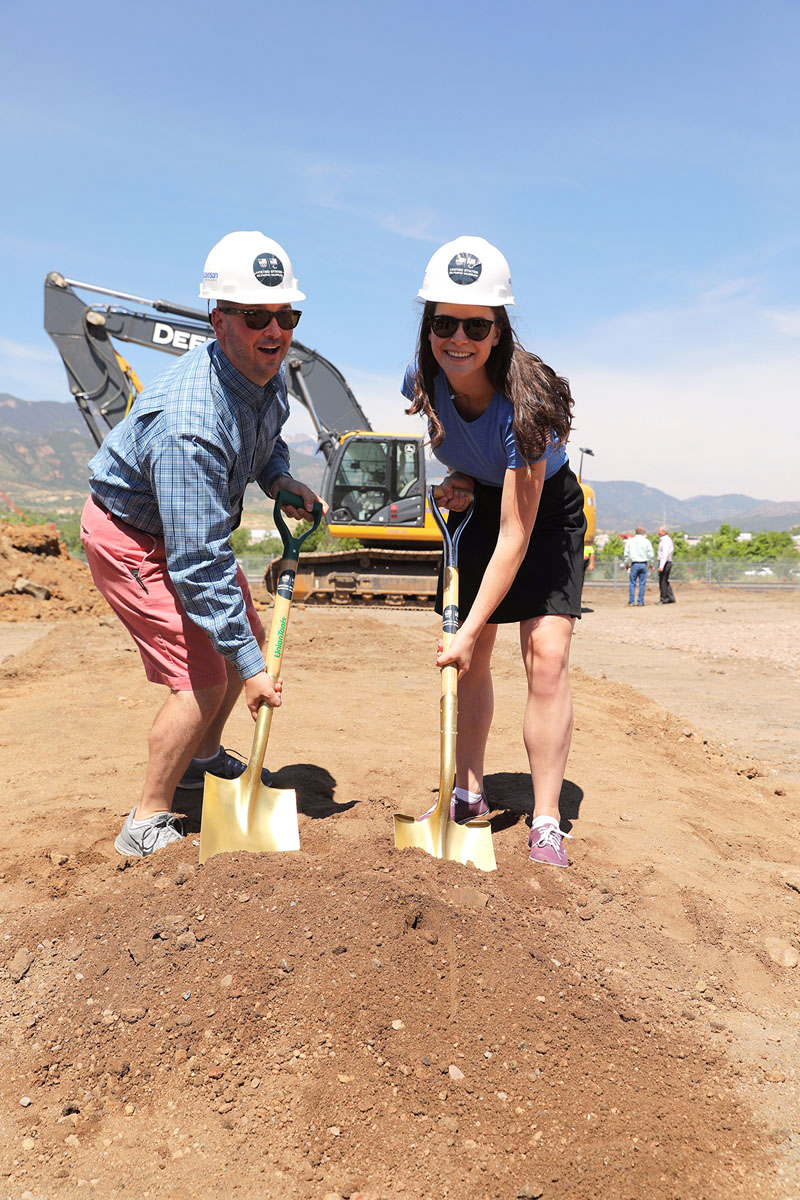