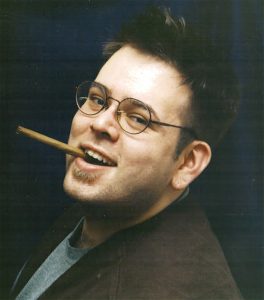 Delaney Utterback ’98, Aug. 24, at age 45. Delaney was the station manager of KRCC 91.5-FM, a Colorado College licensee, for eight years, and a member of the CC family for a quarter century.

“Delaney Utterback was many things,” said Jeff Bieri, KRCC’s program manager. “He was a CC student whose love of music brought him into the fold at KRCC. He was an advocate for gay rights, and he was an artist in his aesthetics.

“Delaney was a believer in each individual’s right to choose his or her own path, and encouraged creativity with a hands-off approach,” added Jeff. “By his own admission, he was ‘part-Vulcan,’ and possessed an uncanny knowledge of the digital realm.”

During his tenure as station manager, Delaney established KRCC’s online music archives, where listeners can hear music shows they missed. He also led the charge in implementing a new website and moving the station into high definition.

In the programmatic realm, Delaney helped usher in an era of collaboration among public and community radio stations throughout Colorado, perhaps most notably playing an instrumental role in the creation of the Capitol Coverage project, in which 15 public radio stations collaborate to bring public policy reporting to communities statewide.

Delaney also helped maintain KRCC’s community presence with events such as the annual Blues Under the Bridge festival, which has since been named a Signature Event by the Colorado Springs Downtown Development Authority.

Delaney’s survivors include his husband, Christopher DuVal; his mother, Gaye Scheafer; his father, Gregory Utterback; and his sister, Lisa Wilson.