Degreed, but Not Gone : Recent alumni step into paraprofessional roles

While many students dream of the day they no longer have to be in school, there are, of course,  consequences of graduation. Without the protection of the “college student” label, there is a societal expectation to have the rest of life planned out, whether it be graduate school, a job, a gap year, or some other option.

David Trevithick ’17, Caleigh Cassidy ’18, Cate Ellison ’18, and Victor Torres III ’18 are four students who realized that staying at CC as a paraprofessional was their best decision.

Paraprofessionals are recent college graduates who stay on with a school to work for a few years as administrators within a certain office or department while they decide their future plans. CC currently has 37 paraprofessionals working in various departments including the Office of the President, Office of Student Life, Communications, and most academic departments.

For the four former CC students, the prospect of graduate school or work in their fields of study — someday — was never in question. With a degree in international political economy for Trevithick, one in psychology for Cassidy, sociology for Ellison, a double major in physics and classics for Torres, and diverse résumés complete with strong GPAs, the options were countless.

“I didn’t want to rush it and get into a lot of debt doing something I hated,” says Trevithick when asked why he didn’t take a more traditional route. Born to two alumni who decided to get married in Shove Memorial Chapel, CC blood runs deep within his family and the paraprofessional position was always a consideration. “These were the best four years of my life, so spending more time here didn’t seem bad.” 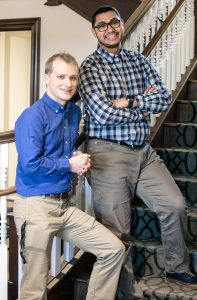 For Torres, the paraprofessional position was a “great layaway to figure out what [I] wanted to do while staying connected to CC.” Growing up in Colorado Springs, attending CC had always been a goal of his, and when the acceptance letter arrived, Torres wanted to make the most of his opportunity. Through a four-year college career that included time as a resident advisor, employment in the fitness center and library, volunteer work for the Butler Center, and involvement in Theatre Workshop, the Student Conduct Committee, and the Debate Team, the end goal was a master’s degree from Columbia in engineering. President Jill Tiefenthaler took note of all that Torres had done during his time at CC and he was offered a multi-office paraprofessional position after graduating.

Unlike Trevithick and Torres, CC was never a long-term plan or goal for Cassidy; in fact, if it weren’t for a chance encounter she might never have made her way to the city of Colorado Springs.

“Being from New Jersey, I had a lot more exposure to East Coast schools and I had never even heard of CC actually,” says Cassidy. “But one day during my senior year I saw my brother’s friend wearing a Colorado College rugby shirt and when I asked what that was she told me about this school and encouraged me to apply.”

Cassidy took the advice and by the time she flew back home after the admitted students’ weekend, the time she spent on campus had solidified her decision. As a student, Cassidy worked with GROW, a mental illness support group, and tutored psychology students. “My four years were definitely a lot of work,” she says. “But more importantly I met a lot of cool people and I learned a lot.” When the paraprofessional job offer came after graduation, she realized she wanted more time to grow in a supportive environment while also studying for her GRE, and so the choice was simple.

While Cassidy only heard of CC through a chance encounter, Ellison, who also grew up in the northeast — Wayland, Massachusetts specifically — had always kept CC on her radar. 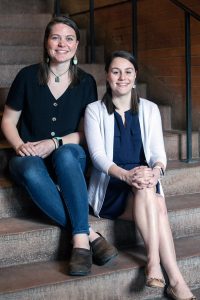 Similar to her three co-workers, Ellison decided to spend the four years of her life at CC and made the most of every minute. With four years split between playing on the Ultimate Frisbee team, working as a tour guide, participating in the GlobeMed Club, and studying abroad for a semester in New Zealand, it’s fair to say that Ellison checked all the boxes of a successful CC student. “There were definitely a lot of ups and downs, but I loved my four years enough to stay a fifth.” Realizing that she didn’t know exactly what path she wanted to take after graduation, Ellison wanted to have time to find her calling while also being productive and immediately the paraprofessional position was appealing.

Paraprofessionals have many tasks and are entrusted with responsibilities comparable to any other employee with a typical 8:30 a.m. to 5 p.m. work day. For Trevithick, who works in the Office of the Provost, the day is usually committed to helping Sandi Wong, dean of the faculty. Morning hours are typically spent answering emails in order to figure out what the dean has on her plate during the upcoming days. Afternoons are usually spent attending organizational meetings or performing administrative tasks such as proctoring language tests for students. Trevithick spends any free time between these responsibilities completing projects for the department such as making edits to the departmental website.

For Cassidy, who conducts research for Lyrae Williams, associate vice president in the Office of Institutional Planning, many hours of the day are spent analyzing surveys and collecting data so that the college can complete reports and track alumni activity. Cassidy is also expected to provide general and administrative support for the Diversity and Equity Advisory Board, and the Curriculum Executive Committee while also doing ad-hoc research for projects.

Torres works in three departments (President’s Office, Student Life, and the Butler Center) and is currently responsible for managing the contacts and schedules of consultants who are externally reviewing racism at CC. This means planning meetings, responding to emails and messages, and making sure that the consultants have everything they need while on campus. Torres is also responsible for completing administrative duties in the President’s Office and overseeing student events on campus such as the Winter Ball, Midnight at Rastall, and Halloween festivities.

Ellison, who works as an academic paraprofessional within the Department of Economics, helps professors with administrative tasks such as scheduling office hours, responding to student emails, and helping set up for classes. The the main part of her day is spent helping economics students with their work. With senior thesis blocks in full swing, Ellison has her hands full assisting students with papers, statistics programs, and other assignments. “It’s definitely always busy but I really like working with students, especially when
I can solve a problem.”

While the responsibilities can get overwhelming, Trevithick, Torres, Ellison, and Cassidy insist that they love working at CC. Eventually, all four want to further their education and move on in their careers by getting master’s degrees in policy and engineering, a job in the marketing field, and a Ph.D. in clinical psychology respectively, but their time as paraprofessionals has provided many advantages. On top of allowing them extra time for decision making, the networking that comes with working for high-ranking college members such as the president and department heads will be invaluable in terms of recommendations and references.