Guy Gibbs tells us that he feels like the “luckiest man that ever lived.” He spent 40 years teaching and coaching at Regis Jesuit High School in Denver, and was a head coach for football, basketball, and track and field. Guy also was a college football official for 25 years, supervisor of basketball officials in the Western Athletic Conference for 10 years, was president of the Colorado High School Coaches Association, and is presently an officials scout for the NFL.

Ellen Hills is continuing to create art while living in Westminster, Colorado.

Jane Rawlings was named 2019 Citizen of the Year by the Greater Pueblo (Colorado) Chamber of Commerce. Jane was publisher of the Pueblo Chieftain newspaper until she and her family sold it last summer. Proceeds went to the Robert Hoag Rawlings Foundation, where Jane now serves as president. The foundation provides financial support for community development projects, college scholarships, and charitable causes in 18 southeastern Colorado counties.

Michelle F. Thomsen will receive the 2019 Arctowski Medal, presented every two years by the National Academy of Sciences to recognize outstanding contributions to the study of solar physics and solar terrestrial relationships. Michelle works with the Planetary Science Institute and Los Alamos National Laboratory. In a 40-year career, she has made “fundamental contributions to our understanding of the relationships between the sun and its planetary bodies.”

After living in Colorado, Idaho, Montana, and California upon graduation in 1972, Cinda Caine is in Atascadero, on California’s Central Coast, to stay. She is enjoying being a grandmother to “the most wonderful grandson,” Luke, born in February 2016. Her daughter Lindsey Caine Bittner ’05, in addition to being Luke’s mom is a district attorney, just as Cinda was, in San Luis Obispo. Cinda reports that she also still practices a little law and volunteers with animal organizations and the San Luis Obispo Progressives. 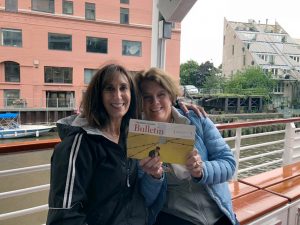 Nancy Saltzman (left) and Lisa Davis Sexton met in Chicago on a windy September day to take an architectural tour. 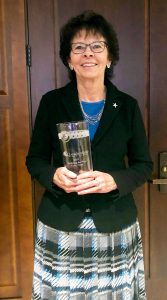 Susan Charli Presti has received the 2019 “Modeling the Way” Community Leadership Award from Leadership Pikes Peak. The award acknowledges LPP alumni whose professional careers have motivated others to get involved in the community. As manager of community relations and information management for Colorado Springs Utilities, Susan is responsible for the organization’s community involvement activities. She has also volunteered on numerous nonprofit boards and assisted with various civic initiative 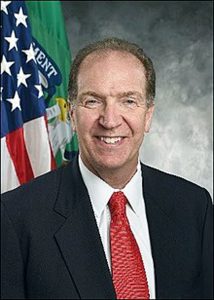 David Malpass ’76 was named the new president of the World Bank on April 5 following a unanimous vote of the bank’s board of executive directors in Washington, D.C. He took office on April 9.

Malpass was nominated by President Donald Trump in early February. He has worked for three presidential administrations, most recently serving as the U.S. Treasury Department’s undersecretary for international affairs, having been confirmed for the position by the U.S. Senate in August 2017. He replaces Jim Yong Kim as the head of the World Bank.

He previously served as deputy assistant treasury secretary under President Ronald Reagan and deputy assistant secretary of state under President George H. W. Bush, including six years with Secretary James Baker at the State and Treasury Departments. During the Reagan and Bush presidencies, Malpass worked on an array of economic, budget, and foreign policy issues, including small business promotion throughout Latin America and the 1986 tax cut.

Malpass writes a column for Forbes magazine, is a contributor to the op-ed section of The Wall Street Journal, and a frequent television commentator.

Malpass graduated from CC with a degree in physics and received an honorary degree from the college at CC’s Opening Convocation in 2007. He gave the H. Chase Stone Lecture, titled “Economic Debates from Wall Street to Washington,” in 2003 and donated part of his honorarium back to the college. He received an MBA from the University of Denver in 1978, and studied international economics at Georgetown University’s School of Foreign Service.