It’s 10:30 on a Friday night, and while most students begin to celebrate the weekend, Colorado College’s student-staffed, student-run Emergency Medical Services squad begins their campus rounds in the weathered CCEMS van they have affectionately named “Lucille.” In addition to ambulance-grade medical equipment, these student professionals are equipped with expertise that begins with a national EMT certification and continues through hands-on experience and regular trainings from the Colorado Springs Fire Department and Penrose-St. Francis Hospital educators.

Lucille’s music stops as the radio crackles and a quiet voice delivers the call — a student has fallen off of a skateboard and is lying injured by the road. On arrival, Sophie Redpath ’19 performs a rapid trauma assessment and isolates a suspected tibial fracture while Quin Gattey ’19 measures the patient’s blood oxygen level and begins taking their blood pressure. Melanie Mandell ’20 records their findings on a hospital chart between witness interviews. CSFD arrives minutes later to a stabilized patient, two sets of vitals, and a detailed report for the attending paramedic as the injured student is transferred to the fire department’s care for transport. 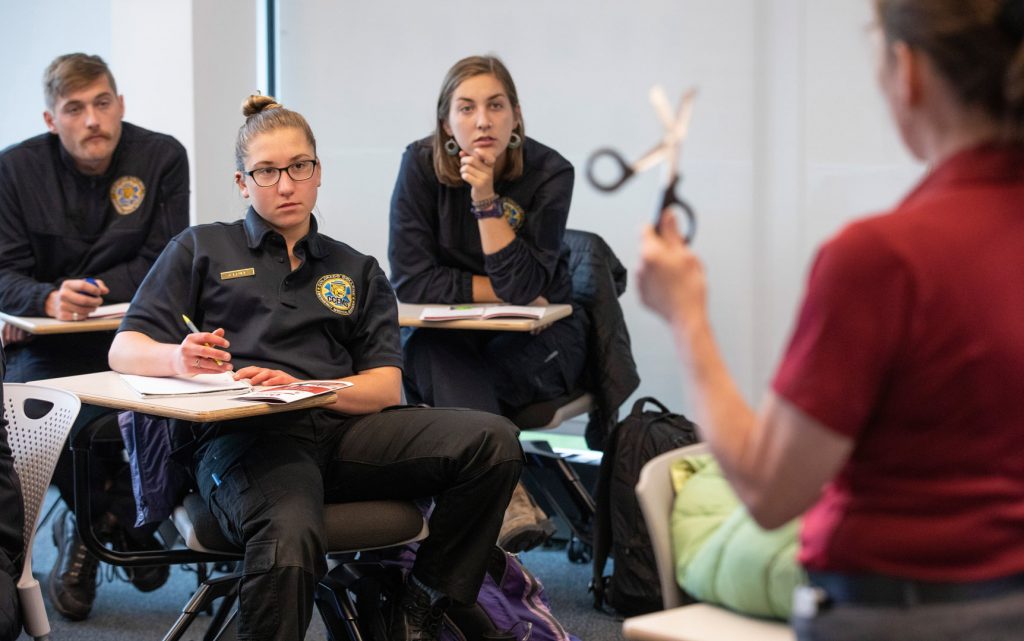 Quin Gattey ’19, Kira Rain ’22, and Jerrica Bauer ’20 listen to instructions about what supplies are needed in their first responder kits. Photo by Jennifer Coombes

The following Tuesday, all 19 members of CCEMS gather at the Campus Safety Office for their weekly meeting, where they present and carefully review the five calls from the weekend. Every shift is an opportunity for the entire team to grow.

Kyle Sansom ’16, Ellie Gilbertson ’17, and Fischer Hazen ’16 founded the CCEMS team in 2014. Sansom transferred to CC in 2013 from Santa Clara University, where he was inspired by their student-staffed, student-run EMS program. When he came to CC, Sansom learned that CC’s Student Health Center was closed at night, meaning that students needing medical attention were sent to the hospital, then often sent promptly back to campus. Sansom knew that a bona fide EMT squad on campus could both reduce costly ambulance bills for students, and allow CSFD and paramedics to focus their time and energy on more pressing emergencies in the wider Colorado Springs community. He also believed that CC students — who come to Colorado College for the fast-paced rigor of the Block Plan – would make attentive and enthusiastic medical responders.

Sansom first joined a volunteer fire department and earned his Firefighter 1 certification, working shifts and running calls to gain experience alongside his studies. The next fall, he worked with Gilbertson and Hazen to build CCEMS. The team spent a majority of their time navigating the legal side of student EMS. The founders modeled themselves off of schools nationwide that have well-established teams, while building a local network in Colorado Springs to access necessary support. They connected with CSFD’s Capt. David Broch as well as Dr. Tim Hurtado, D.O. ’94 and Dr. Thomas MacFarlane, M.D. ’93, two CC alumni who work as ER doctors at Penrose Hospital in Colorado Springs. Broch, Hurtado, and MacFarlane continue to assist with emergency medical response training.

In the early years, the CCEMS squad would wait in CC’s Campus Safety Office for the call — which often never came. “As a new group, a lot of students didn’t know about us — or if they did, they wouldn’t ask for help,” explains Sansom. Redpath adds, “If there was alcohol involved, students would sometimes think we would get them in trouble, when that’s not our role. Our job is to make sure they’re safe and provide high-quality medical care.” CCEMS began to work more closely with Residential Life, giving presentations during residential advisor trainings before the academic year. In recent years, the demand for CCEMS has increased as the campus community has become more familiar with the services their peers provide. While students usually call the Campus Safety Office to request care from CCEMS, many students call EMS shift staff directly on their cell phones. As the program has deepened their network, interest has also increased, with upwards of 20 to 30 students applying for the three to four spots on the team each year.

The EMS squad benefits the local community just as much as CC’s campus. Explains Capt. Broch, “Now that the CCEMS team has the authority to determine whether or not a patient needs to go to the hospital through the refusal policy, firefighters and hospital paramedics can focus our time and efforts on the Colorado Springs community.” 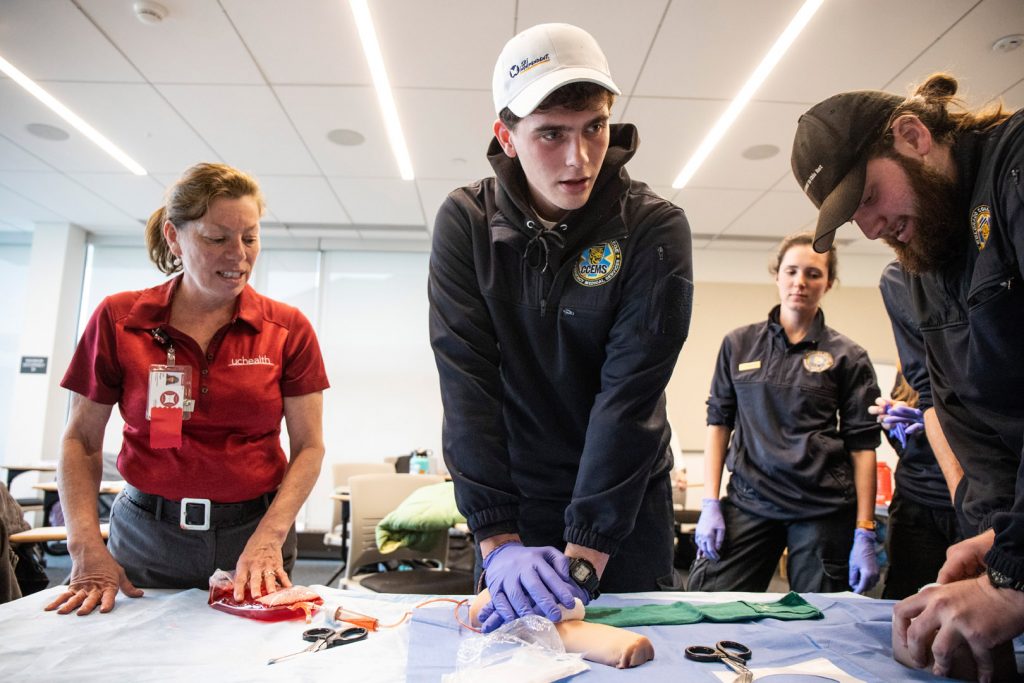 A large part of the team’s job is staffing home club sports games and campus events. Redpath was a captain for Cutthroat, CC’s gender-inclusive rugby team, as well as a director of the EMS squad. She recalls a number of instances when fellow student EMTs attended to her teammates on the sidelines. “They even treated me once for a broken finger and another time for some bad turf burn,” says Redpath. “CCEMS is extremely professional — it’s so affirming to have my friends and coworkers give me that same level of care that I give to other students. I was proud to be a part of both rugby and EMS at CC. And my rugby teammates are grateful for the EMS squad, too.”

Like Redpath, EMS squad members are involved in student life across campus. Assistant Director of Campus Safety Cathy Buckley emphasizes the hard work, dedication, and remarkable time management that these student leaders demonstrate alongside their various academic and co-curricular interests. She underscores their desire to push the program forward, noting, “One of our squad leaders who previously worked at a suicide prevention hotline re-wrote and actually taught the mental health portion of the EMT program here on campus. Traditional EMT programs devote only one hour  to mental health, but this group understands the crucial intersection of their response to mental health calls in the welfare and treatment of the patient.” For CCEMS staff, attention to a patient’s wellness goes far beyond the physical injury.

The experience that these student responders gain has proven to serve them well down the road. A vast majority of graduates go into the medical field, continuing their service in emergency medicine or attending medical school. Gilbertson, who just completed her second year at the University of Utah School of Medicine, credits much of her success after CC to the lessons she learned on CCEMS.“It taught me that I can be a leader and really make an impact by serving others. I was always interested in the medical field, but EMS wasn’t on my radar until I came to CC. Now I’m considering a career in emergency medicine.”

Even as graduates go on to pursue their own careers, ties remain strong to the EMS team on campus. Hurtado, who discovered his passion for medicine as a backcountry enthusiast studying biology at CC, underscores the program’s successes and potential. “Working with CCEMS is a great way for me to give back to my alma mater – and I’m proud to say that there is a growing number of CC grads coming back to work in Colorado Springs after medical school.”

Recent alumni also have high hopes for their legacy and for the group’s future. “I’d love for CCEMS to have their own ambulance one day … or even a helicopter,” says former CCEMS Co-director Nick Ravich ’19, knowing that the latter is unlikely. Still, he’s already identified a landing spot: atop Rastall Dining Hall.