Mike Edmonds Inducted into National Speech and DebateHall of Fame 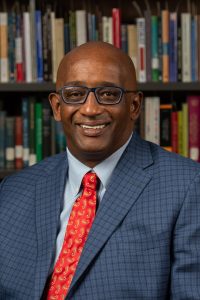 Dean of Students and Vice President for Student Life Mike Edmonds has been inducted into the National Speech and Debate Association Hall of Fame. Edmonds has been involved in competitive speech for most of his life. His work in speech and debate earned him induction into the Gold Key Society at Emory University. He also received the Delores Taylor Arthur award from the Holy Cross School in New Orleans and the Martin Luther King award from James Logan Forensics in California. In addition to his induction in the NSDA’s Hall of Fame, Edmonds recently was selected for induction into the University of Mississippi’s School of Education Alumni Hall of Fame. He earned his B.A., M.A., and Ph.D. from Ole Miss.

And, in more Edmonds news: The classroom near the Ryan Data Viz wall on the first floor in Tutt Library has been named the Frank Jr. and Hattie Mae Edmonds Experimental Classroom. Edmonds donated to the college in their name and celebrated the naming of the classroom with his sister Judy Edmonds and members of the CC community in early June. “Frank Jr. and Hattie Mae Edmonds understood the essence of liberal learning, without ever knowing what a liberal arts education was,” Edmonds said at the dedication.