It was a delight to see the photograph on page 10 of the latest Bulletin. During my visit to CC for my 50th reunion in 2012, I took some time to visit the archives at Tutt Library to do research on my family’s history with the college. A large print of the baseball team photograph was lying on a table in the archives with a note that the names of the players were unknown. I was struck by the student sitting at the far right of the middle row — he was my grandfather, Frank Sawyer Bayley. The archivist was excited that there was one name that could be associated with the picture.

Looking for more information, I began perusing copies of the Colorado Collegian, a student publication of the day. In the issue for June 1895 on page 15, I found another photo of the same baseball team, this time with captions identifying all the players. My grandfather is identified as F S Bayley. His brother Dwight Bayley was also on the team and is pictured at the far left of the back row. My grandfather played left field and catcher according to the article. The photograph identifies the group as “Colorado College ’95 Base Ball Team.” The caption in the Bulletin is 10 years ahead of its time.

The archivist made photocopies of this and other articles from the Colorado Collegian related to my grandfather and his siblings, including his sister Francis Bayley who appears to be the only member of the family to actually graduate from CC. Grandfather left Colorado Springs in 1896 to complete his education at Harvard. I have no idea what ever happened to Dwight. I am attaching a scan of the photocopies made that day in 2012. They make great reading and for me are a treasure of family history in the Rockies. 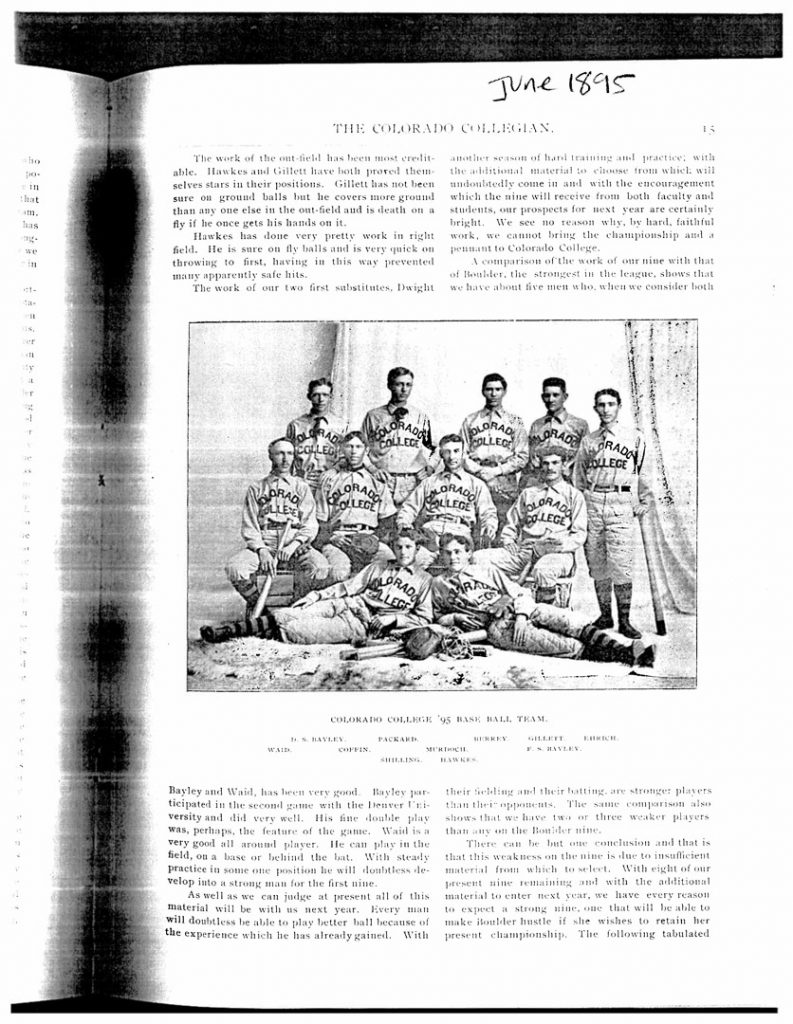 On the “Tigers Crossing Paths” page, the coincidental meeting of Doug Obletz and Bill Altman at a cycling hotel in Italy was highlighted. Surprisingly, in 2006 and 2008 I visited the very same hotel, probably rode many of the same routes, and enjoyed the same great food as these two alums. I had the added treat of riding the Gran Fondo Nove Colli.

Then, in the Class Notes section, the participation of three alums in the legendary RAGBRAI seven-day bike tour (or moving party) across Iowa. This is a ride that in the ’90s I did with a group from Chicago three times.

For a select (and small) population like that of CC alums these coincidental experiences always surprise. Adds to the enjoyment of reading the Bulletin.

I just spent two hours reading this issue cover to cover. So many interesting people and events! Thank you for the breadth and depth of your reporting on the CC community. It keeps me up to date. I haven’t been back to campus since the early ’70s but am aiming for my 50th reunion in 2020.

I applaud CC for addressing the most pressing issue of our time — climate change. I was heartened to read that courses are taught on the subject, and that students, professors, and alumni attended the COP 24.

An interdisciplinary approach is required to tackle such a complex issue. Scientific inquiry into the progression and effects of climate change, as well as possible mitigating solutions, is only one part of a multi-pronged approach. Equally important are changes in current legislative and social policies that are detrimental to our carbon footprint. Far-sighted business leaders must create a new paradigm that aligns corporate responsibility with long-term growth and profitability. And finally, those with expertise in human behavior are needed to help individuals confront the paralysis of denial and hopelessness, so they can move to action.

As world citizens we each have a responsibility to roll up our sleeves and get to work. I am proud of my alma mater for working toward carbon neutrality by 2020. And, as an alumna, I appreciate being included in the college’s outreach efforts. I will be attending the Conference of the Parties in December 2019, and helping the college in its climate change outreach efforts to the Colorado Springs community.

As was hoped, the Spring 2019 Bulletin article on “Sustaining Hope,” generated much positive response from alumni. As of this writing, 20 alums have answered the call to join the climate change professionals network on Tiger Link and voiced strong support of the college taking on bold climate action as an institution raising its voice and on the CC campus. In addition, eight have expressed keen interest in attending COP-25 in Santiago, Chile, in December.

Alumni were integral not only to our Katowice delegation in 2018 but also in building momentum on this important issue over the better part of the last 18 years. This past year, Courtney Shephard ’09, a natural resources attorney at Davis Graham & Stubbs LLP, was co-instructor of Economics of Climate Change in Block 1 and the Economics of International Climate Policy in Block 4 with me. Courtney taught the legal and policy frameworks of tackling climate change within the United States and in the international arena. In Katowice, she helped students grasp the critical debates over language in a year that creation of “the Paris Rulebook” dominated negotiations. Courtney said, “Returning to campus to co-teach courses on a topic that I’m passionate about and now work on daily was a wonderful and unique opportunity that underscores CC’s engagement beyond graduation. Mark was my senior thesis advisor (topic: greenhouse gas impacts of commonly consumed animal products) and I was fortunate to be a student in his first climate change-focused class, so returning to campus to teach with Mark brought everything full circle.” Sustainability consultant Holly Moynahan ’16 and Watson fellow Theo Hooker ’18 also enthusiastically supported the student delegation.

The “We Are Still In” pledge was similarly built on alumni efforts. Matt Banks ’97 helped initiate this effort immediately after President Trump’s June 2017 announcement of U.S. withdrawal from the Paris Agreement. Matt also was the catalyst that helped keep climate on the radar for the college since 2002 when he entered the scene in Washington to mobilize corporate brands to cut emissions and embolden their climate action response, leading the Climate Savers Program. At COP-23 at the U.S. Climate Action Center in Bonn, Germany, Matt and Katherine Neebe ’97 persuaded Katherine Kerr ’18, John Higham ’18, and Sophie Leamon ’18 to engage President Tiefenthaler on the WASI initiative, laying the groundwork for the college signing this important pledge.

Matt Banks and a number of other alumni have led students to engage in Washington on climate for nearly the last two decades and then at the international UNFCCC level starting in 2009 at COP15 in Copenhagen.

In 2018 alumni climate change roundtable events were piloted in Washington, D.C., Seattle, Boston, San Francisco, New York, and Denver, and the college looks to do more in 2020.

Alumni, please don’t think you can’t still make a difference at CC. You can. You are. You will.

With gratitude and admiration,

We welcome your letters to the editor. Please send them to: