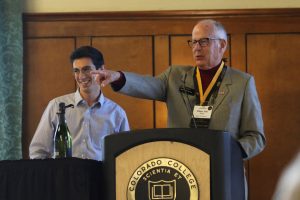 Dan Cooper ’66 (on right) presents CCSGA President Ethan Greenberg ’20 with a bottle of champagne for the Class of 2020. Photo by Tom Kimmell

During Homecoming Weekend, Fifty Year Club Co-President Dan Cooper ’66 and Colorado College Student Government Association President Ethan Greenberg ’20 started a new tradition. Cooper presented Greenberg with a bottle of champagne to be saved for the Class of 2020’s champagne on the quad toast that will happen as the academic year wraps up this coming spring. Greenberg then addressed the newly inducted Fifty Year Club members, sharing with them his plans for senior year as well as how the CCSGA group now functions.

“I think it’s important for students to recognize that we interact with alumni all the time at the college,” says Greenberg, who shared that many alumni are CC professors, members of the Board of Trustees, or people in the communities they’re from who may have introduced them to Colorado College.

The newly established tradition of the Fifty Year Club and student connection was one way of formalizing those interactions and, symbolically, it represented the lifelong connections that both alumni and students have with the college.

As CCSGA president for the 2019-20 academic year, Greenberg also believes it’s important for alumni to know about what is happening at the college. Specifically, he cites the college’s work on becoming an antiracist institution, the college’s 2020 carbon neutrality commitment, and recently launched access initiatives like the test-optional policy, the Stroud Scholars Program, and the Colorado Pledge.

“Alumni should feel they have a part in it,” he says. “It’s really key to view alumni as continuing their education, just as students are pursuing theirs.”

Greenberg, who is a political science major from Denver, came to CC as a Boettcher Scholar, which gives him perspective on the college’s efforts to become more accessible for Colorado families.

He’s also been extensively involved in the local community, working at the El Paso County courthouse through a program called Justice Watch and the El Paso County jail through the Prison Project. Greenberg says those extracurriculars, along with his student government work, have been formative to his CC experience.

“There are three extracurriculars — teaching at the county jail, working with justice court, and participating in student government — that have been critical factors,” he says. “They’re all outward facing and interesting in unique ways.”

Through these extracurriculars, Greenberg says that he is able to give back to the community and that the college and CC students also are benefiting from these collaborations. He sees the Colorado Pledge as a commitment to Colorado and Colorado families and as an affirmation of CC’s sense of place in the region.

“Certainly, we’re fortunate to have perspectives from a lot of other countries at Colorado College,” he says. “At the same time, I’m proud of what we are doing through the Colorado Pledge because it’s bringing more of that foundational element and commitment to CC by bringing more Colorado students here.”

“We recognize this state as our home,” he adds, “and we recognize that we have a service to this place because it gives us so much.”

He also believes that Colorado College needs to look locally to accomplish meaningful sustainability goals and achieve its commitment to being carbon neutral by next year.

“We can get carbon credits and we can help other institutions in the surrounding area become more environmentally friendly,” he says. “We can build relationships and good will and partnerships for years to come through that effort.”

Regarding the college’s goal to become an antiracist institution, Greenberg says it will require looking beyond how students are admitted.

“Antiracism efforts are not solely about the compositional diversity of a school,” he says. “They’re about the student experience after you’re admitted and providing equitable access to resources for all students.”