Just a few days after graduating from Colorado College this May with a degree in economics, Austin Ronningen ’19 began an internship at Los Sueños Farms. The family-owned business in Avondale, Colorado, about 60 miles south of campus, focuses on environmentally friendly, organic farming practices. But they aren’t growing carrots, corn, or Swiss chard. Their 36 acres house some 36,000 cannabis plants for four Colorado-licensed retail marijuana cultivations that lease the property, making Los Sueños the largest outdoor recreational cultivation facility in North America.

Two months into the internship, Los Sueños offered Ronningen a full-time job. He’s now responsible for inventory and packaging for product that’s ready to be sold, as well as working with Metrc, the compliance tracking system used by Colorado’s Marijuana Enforcement Division of the Department of Revenue. 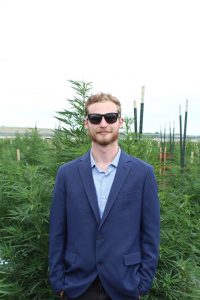 “I never thought this is what I’d be doing at all” after graduation, says Ronningen, “but it was a more interesting offer than anything else I had for more traditional economics or finance jobs.”

Part of that interest comes from the fact that cannabis is a booming new industry. If Ronningen had graduated five years ago, he wouldn’t have been offered an internship, much less a full-time gig, at Los Sueños because the company didn’t exist. This year, he’s joined what’s considered the fastest-growing labor market in the U.S., based on research by Whitney Economics and Leafly. (The U.S. Bureau of Labor Statistics doesn’t officially count cannabis jobs, even though records show there are now more than 200,000 Americans employed by the industry. Compare this, as Whitney Economics does in its report, to 52,000 coal-mining employees, 69,000 brewery workers, and 112,000 textile manufacturing personnel.)

“It’s changing way, way, way faster than anyone I think from the outside can really imagine,” says Ronningen. “It’s like anything that once vast amounts of money are put into it, the kind of value that other people see in it and the effort and capital that’s put in will just exponentially grow.”

In Colorado, this change began 20 years ago.

Ask state residents, and many will say, at this point, marijuana feels mainstream here. “I forget that it isn’t just legal everywhere,” says Rhonda Gonzales ’89, dean of library services and steering committee member for the Journal of Cannabis Research at Colorado State University-Pueblo (see interview with Gonzales).

In 2000, voters approved Amendment 20, allowing the use and sales of medical marijuana in the state. Twelve years later, voters passed Amendment 64, which legalized marijuana for recreational use for those over the age of 21, making Colorado the first state to end marijuana prohibition in the U.S. The seven years since haven’t been struggle-free though — the state had to figure out rules, regulations, licensing, and taxing, as did individual municipalities. Though recreational marijuana is legal across Colorado, the vote left it up to cities to decide whether to allow sales or not. Colorado Springs chose the latter, even though the city does allow medical dispensaries. Neighboring Manitou Springs chose the former and currently allows two recreational retail shops.

Associate Professor of Southwest Studies Santiago Guerra sits on the City of Colorado Springs’ Medical Marijuana Working Group and is fascinated by the dynamics in the local community. “I think here in Colorado Springs where we have a more conservative outlook on the substance, where we haven’t approved retail sales, we’re dealing with very different dynamics from other locales in the state.”

There’s a lot of tension around how locals view the substance, Guerra says. “We have, at least on paper, the biggest medical cannabis-serving population in the state.” Colorado Springs residents seem to be more accepting toward cannabis as a medicine, he says, “available for those who need it for these particular things and really not in any other capacity.”

It’s just one of many points of discussion that come up in the cross-listed Business in Society class he’s been co-teaching with Professor of Economics and Business Jim Parco since 2016.

“Santiago covers the history, the culture, the early policy/development of cannabis prohibition and legalization, and then I discuss the regulatory environment, the legal aspects, some of the societal impacts and the formations of the industry in Colorado, and the scaling of it,” says Parco.

The students then have to take what they’ve learned and mock-appeal for licensing a cannabis business. “They put applications together. Santiago and I are the ‘Board of County Commissioners,’” Parco says, “and they see how difficult this is.”

Both Parco and Guerra also teach other classes that engage conversation on cannabis.

For Parco, it’s in his 400-level Business Policy and Strategy class. “We always have a topic of mergers and acquisitions,” he says, “and the latest news in Colorado the students are interested in is the consolidation of the cannabis industry.” He includes a day of class where they discuss the regulated cannabis industry and analyze related consolidations happening in real time.

Though Parco brings in guest speakers to talk about “the practical matters” and assigns case study reviews from Harvard Business Publishing — this year they focused on the Canadian-based Canopy Growth Corp., the world’s largest cannabis company — it’s a topic he understands better than many other people do. The former U.S. Air Force lieutenant colonel and his wife founded a cannabis company in Pueblo, Colorado, in 2014, which was acquired by another business earlier this year.

Ultimately, though, Parco is simply teaching students the same skills he’s been imparting since he began this work in 1996 at the U.S. Air Force Academy. “For me as a professor, it’s the same,” he says. “Whether it’s in manufacturing, whether it’s construction, whether it’s consulting, whether it’s cannabis, it’s the same business skills. It’s just a different product. … It’s marketing. It’s finance. It’s accounting. It’s policy and strategy. It’s management. To start, those are the core areas, right? But those are the areas that any business entity looks for students to have a knowledge of theories, models, and skills.”

“Most of what I’m doing right now, I guess is what you tend to do as a professor. I’m really developing an expertise in the industry and the way you do that is you study it, you pay attention. … Much like historians don’t really talk about current administrations for about 25 or 30 years to be able to really find out what happened, it’s kind of the same thing. …

“The kinds of research that I’m doing, it’s less manifested in written publications,” he says. “Those will be coming fast and furious in about three years. I’ve got probably a dozen working papers that I’ve drafted, but it’s just, in my opinion, it’s still premature to release them. I don’t know what I’m really seeing, but I have a pretty good idea.”

He does have students publishing though. For his thesis two years ago, Austin Davie ’17 studied how marijuana legalization affected the black market. His team of six, including Parco and two other CC folks — Department of Economics and Business paraprofessional Phoenix Van Wagoner ’13 and Haley Parco ’16 — conducted a series of anonymous interviews with black market operators on how legalization affected their business. The study, “Black, White, and Green: The Effect of Legalization on Colorado’s Black Market of Cannabis,” was featured in “The Politics of Marijuana: A New Paradigm,” a book edited by Timothy McGettigan and published in August.

For Guerra, his other class offerings come from a very different perspective than Parco’s.

He says he was lucky to arrive in Colorado in 2011 as the state was building up to Amendment 64. “Most of my work has been around border smuggling, drug policy along the border, and its impact on border communities,” says Guerra. “Coming in here it just seemed like I was well-suited to be looking at drug issues and really to think about what happens when things completely change.”

Trained as an anthropologist and as a historian around U.S.-Mexico border issues, Guerra thinks about this topic in an interdisciplinary way, such as how has history impacted our relationship to cannabis in the present. One of the first courses he began teaching when he arrived as a visiting professor was on drug wars. Cannabis was one point of topic in that class, he says, both in terms of the history of prohibition and medical marijuana legalization.

But, he says, students were so interested that he went on to develop a Half-Block course focused on just that topic.

“Part of it is to help people start to think about how did we get here in terms of prohibition and then what are some of the things we have to deal with as we transition out of prohibition into reform,” Guerra says. “And then the other part of it is really thinking about what sort of impacts are border communities feeling from legalization as well as what are communities of color more broadly experiencing.” (See “Cannabis and the Latinx Community” on pg. 18.) 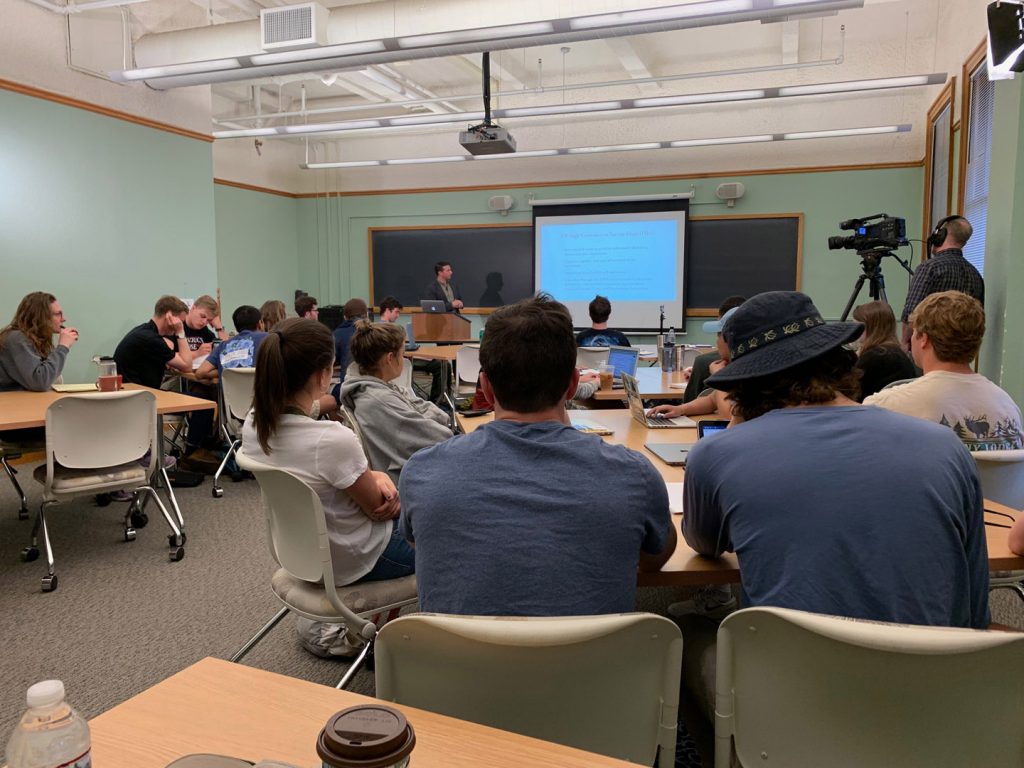 While multidisciplinary classes tackling the topic of cannabis at colleges and universities across the country are getting a lot of attention right now — C-SPAN recently visited one of Guerra’s classes to record his lecture on marijuana regulation in U.S. history for its American History TV “Lectures in History” series — Guerra says that it’s not what we think about cannabis that we should be focused on but how we think about it.

“This offers us a unique way to do liberal arts education that really can put all of the campus in conversation. … Jim’s in economics. I’m in history and anthropology, in Southwest studies. And we’re able to have these conversations that I feel should be happening on campus, but they should also be happening across the U.S. As a product of a liberal arts education myself, I think this is the great benefit of liberal arts learning that you’re able to be the greatest critic of a policy, but also perhaps the greatest advocate. You should be able to find all of the compelling information for both sides,” he says.

“Regardless of where [you] sit on the political spectrum, or [whether you] desire to engage with the substance at all, it’s a part of our society that we now have to really all use our minds and our histories and our positions to be able to understand how we can effectively [serve] the communities that we are a part of.”

Policies may have changed in the state of Colorado, but that doesn’t mean they’ve changed on campus.

CC’s policy on marijuana is straightforward: “The federal Drug-Free Schools and Communities Act disallows the use of drugs including marijuana; if the college fails to comply, it could become ineligible for federal funding and financial aid programs for its students. The college’s policy also does not allow the use of medical marijuana.”