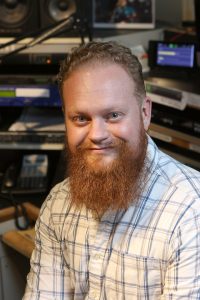 Kyle Cunningham has been named general manager of 91.5 KRCC, Colorado College’s NPR-member station. He joined the station as membership manager in 2016 and served as interim general manager for seven months before assuming the position in September. Since arriving at 91.5 KRCC, Cunningham has built a strong membership program that has continuously broken records, cultivated a new Summit Club giving level, enhanced engagement with members and listeners by hosting events to meet reporters and editors, including “star parties”  for fans of the “Looking Up” astronomy segments, and a major event featuring national “Morning Edition” host David Greene. He emphasizes the importance of community connection.

The station was started in 1944 by a CC professor, Woodson Tyree, as a two-room public-address system on campus. It became the first non-commercial educational FM radio station in Colorado in 1951, and joined the NPR-member station system in 1984. Today 91.5 KRCC serves a 25,000-square-mile area that ranges from the mountain communities of Woodland Park and Buena Vista, Colorado, to Raton in northeastern New Mexico.

Learn more about Cunningham at 2cc.co/krcckyle.