For Director of Admission Matthew Bonser ʼ98, Colorado College applicants have always been more than data. With its new test-optional policy, CC is echoing the sentiment.

CC first reformed its standardized testing policy in 2010, when it adopted a flexible testing policy, in which applicants chose three scores to submit from several different test options. This year, the college is going fully test-optional. For students applying for entry in Fall 2020, whether or not they want to submit scores from standardized tests such as the ACT or SAT will be their decision to make.

Bonser says that CC has always made admission decisions based on a “holistic” process — taking in information about students from transcripts, recommendations, interviews, GPAs, community involvement, and writing samples — and that even with the flexible testing policy, standardized test scores were only small parts of their decisions.

“I think students are encouraged,” Bonser says. “This is something that’s always been true, that we care about the whole student, but I think that going test-optional really signals to students that we really, really do care about the person more than the data. And I think for counselors, it helps them make the case that testing needs to be held in context.”

And CC is certainly not alone in this shift, joining the ranks of institutions like the University of Chicago, the University of New Hampshire, and the University of Denver. In the past year, 41 schools have dropped standardized testing requirements for admission, and on average, a new higher education institution switches to a test-optional policy every 10 days, according to an article published by “PBS NewsHour” in October 2019. 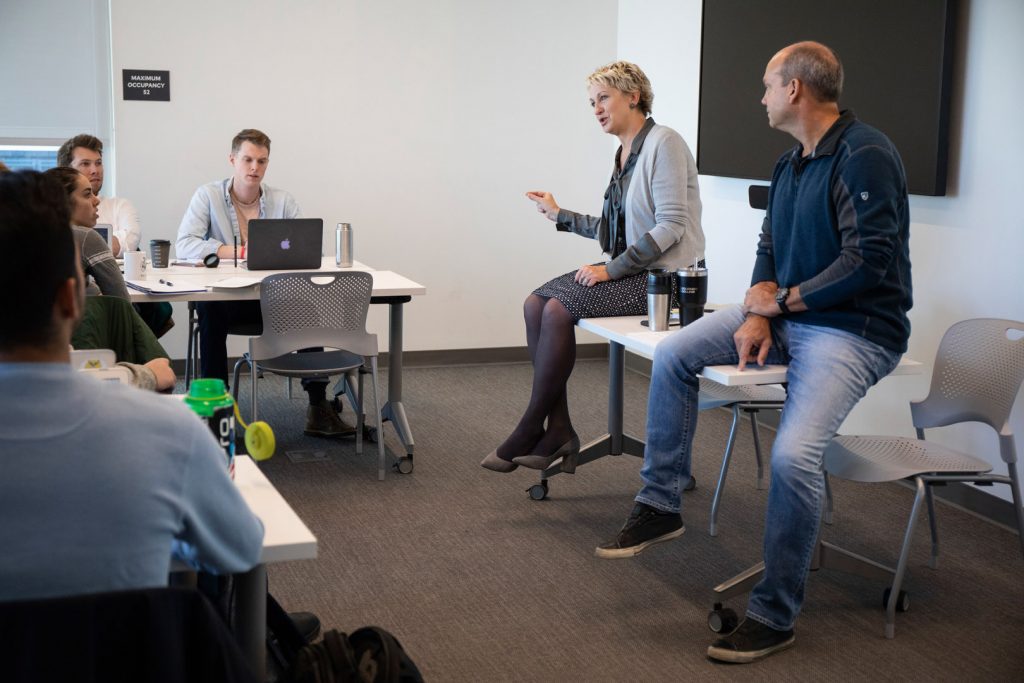 Each year during Block 5 President Jill Tiefenthaler and Kevin Rask teach a course on the economics of higher education. The course looks critically at trends and the ins and outs to run higher education institutions.

Critics argue that standardized tests perpetuate inequality in the admission process because of cultural biases and correlations between test scores and parental education and income. CC President Jill Tiefenthaler and Kevin Rask, CC research professor of economics and business, wrote about this in a chapter for “SAT Wars: The Case for Test-Optional College Admissions.” They reported research suggesting that standardized testing’s correlation with performance in college is “fairly small” and predicts the college GPA of some socioeconomic groups better than others.

“In future work examining the usefulness of the SAT in college admissions, these marginal gains in predictive power should be evaluated against the costs — sociological, psychological, and financial — of the SAT,” Rask and Tiefenthaler wrote.

Paul Tough, best-selling author of “The Years That Matter Most: How College Makes or Breaks Us and How Children Succeed,” agrees.

“SAT is mostly creating obstacles for high-achieving, low-income students who want to get the kind of higher education they deserve, and it’s giving a leg up to wealthy and advantaged kids who already have a lot of advantages,” Tough says in a recent interview on Education Writers Association Radio. For example, affluent students have access to test preparation, tutors, and taking tests multiple times.

After implementing their test-optional policy,the University of Chicago reported a record number of students from underrepresented backgrounds in its 2019-20 class, including increases in first-generation,low-income, and rural students. Based on the experiences from other test-optional universities, Rask expects the test-optional policy to have similar effects at CC, as well as increasing the number of applications CC receives.

Sara Springer Purviance ’04, associate director of college counseling at the Colorado Academy in Lakewood, sees the test-optional policy as a powerful way to communicate CC’s ideals.

“I think that to truly go test-optional is giving that wonderful message to students and to families that we know that these tests are unfair and we know that they predict income level and how white and upper class you are more than anything else,” Purviance says. “And so I think that it just sends the message that we care a lot about who you are as a person and as a student.”

Before starting her work at the Colorado Academy, Purviance worked at CC as an associate director of admission. While she was working at CC, the Office of Admission implemented its flexible testing policy, and Purviance thinks the new transition to test-optional is a “wonderful continuation of that” and a policy that is “so much stronger.”

“I think that just falls in line with the values of a place like CC,” Purviance says. “When you think about the core ethos of CC, you don’t think about things like just being a good tester. Now we have great testers who are there, but there’s so much more than that … there are so many colleges that are going this direction, and I’m so proud that CC is one of them.”

The test-optional policy comes amid a broader push by the college to increase socioeconomic access to CC. This year alone, CC has launched the Colorado Pledge, a financial aid initiative designed to make the college as affordable as Colorado’s “flagship” university for Colorado families with adjusted gross incomes below $200,000, and the Stroud Scholars Program, a three-year college preparatory program for selected Colorado Springs high school students that will result in admission to CC.

Along with the implementation of the test-optional policy, CC will drop the $60 admission fee it has required in the past.

“That, in some ways I think, was a psychological hurdle for some students, where $60 can be a lot of money to come up with on any given day,” Bonser says. “As we think comprehensively about how students access Colorado College, making the application process accessible is a start.”

Bonser says he hopes that these initiatives are only the beginning of structural changes to make sure “students can find their way in” and receive substantial financial support.

“It’s really, really exciting to be able to bring new policies forward and to continue to have CC evolve in the way it reviews candidates and what it can then offer students via financial aid … [and] course offerings,” Bonser says. “It’s an exciting time.