Colorado College has achieved carbon neutrality, a goal it set in 2009 when it committed to becoming carbon neutral by 2020. After a decade of work, the ambitious target has been met — even as the college increased its building footprint by more than 10% during that time. CC is only the eighth institution of higher education in North America, and the first in the Rocky Mountain region, to achieve this goal.

“This achievement is a shared effort; the result of the hard work, commitment, and resourcefulness of the entire Colorado College community,” says President Jill Tiefenthaler. “We thank all those who helped make this happen: former President Dick Celeste, the Board of Trustees, the students and young alumni who have worked on these initiatives, and CC’s faculty and staff, particularly those on the Sustainability Council, whose work and leadership has been invaluable.”

Colorado College stands out among other schools that have reached carbon neutrality in an important way — it has made the greatest emission reductions on campus while buying the fewest offsets than any other U.S. campus. 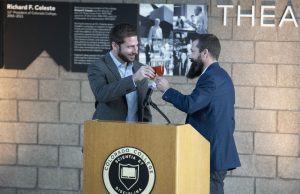 From left: David Amster-Olszewski ’09, founder and CEO of SunShare, toasts with Office of Sustainability Director Ian Johnson at the celebration for reaching the college’s carbon neutrality goal. Photo by Jennifer Coombes

“This means we’ve done the difficult work of reducing our on-campus emissions first, rather than what some see as ‘buying our way’ to neutrality through offsets,” says CC Director of Sustainability Ian Johnson. Colorado College has done this in a replicable and scalable way, meaning nearly any other institution could apply the strategies used by CC to achieve its goal of carbon neutrality.

Colorado College embarked on its journey to carbon neutrality in 2009, when then-president Richard F. Celeste signed the American College and University Presidents’ Climate Commitment, now known as the Second Nature Carbon Commitment. Celeste chose not to sign in 2007, preferring first to have more information in hand, including the college’s carbon footprint and the efforts necessary for it to reach carbon neutrality, including reducing the college’s emissions of greenhouse gases, cutting energy use, using more renewable energy, and emphasizing the importance of sustainable energy sources.

Since the college’s baseline year in 2008, CC has reduced on-campus emissions by 75%. Colorado College achieved neutrality through a variety of initiatives, including efficiency upgrades, building renovations, campus engagement, on-site renewable energy and local renewable energy purchases, reducing its carbon footprint even as its physical footprint expanded by 10% with the alliance with the Colorado Springs Fine Arts Center in 2017. Between the Fine Arts Center and the Bemis School of Art, CC added more than 142,000 square feet to its building footprint.

Because climate change is linked to and influenced by many different factors — from environmental racism to human health and income inequality, clean water, food production and access, and more — achieving carbon neutrality impacts far more than just the college’s operations, says Johnson. The college is undertaking many new initiatives, including adding more sustainability courses and finding new ways to make the college more accessible to students from diverse geographic, ethnic, and socioeconomic backgrounds, increase students’ literacy and understanding across majors, and strengthen the institutions that build the resilient society that will be needed to adapt to impacts from climate change.

To account for remaining emissions, which include difficult-to-avoid emissions such as college-related air travel, study abroad, commuting, and wastewater, Colorado College is investing in carbon offsets — innovative projects that reduce or eliminate greenhouse gas emissions elsewhere. Specifically, CC has invested in a methane destruction project at the Larimer County landfill in Northern Colorado. This project prevents methane (CH4), a very potent greenhouse gas, from entering the atmosphere, and instead uses the CH4 to generate electricity directly to the Larimer County community.

Although CC has met its carbon neutrality goal, that does not mean the work is finished. President Tiefenthaler and the Board of Trustees have put together a Climate Change Task Force, led by Provost Alan Townsend, to take on a “What’s Next” project looking at operations, leadership beyond CC, academics and the co-curricular, and the endowment.

“Addressing climate change will take strong, consistent work from institutions of every kind. CC has shown that significant progress in the climate impact of operations is possible in a relatively short period of time, and we are committed to showing that can be done in other sectors as well,” says Townsend.

More information about Colorado College’s progress is available at coloradocollege.edu/carbonneutral2020.