How $10 Million for Scholarships Grew to $43 Million 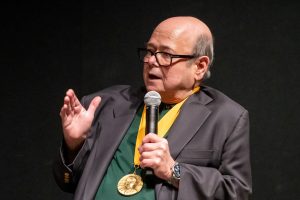 Will Smith ’74. Photo by Jennifer Coombes

For Will Smith ’74, alumni giving is a key philanthropic focus. Smith launched the Endowed Scholarship Challenge 101 in 2015 with a $10 million commitment to inspire others to join him in supporting Colorado College students. The goal of the challenge was to encourage 100 other donors to participate and to raise at least another $10 million, for $20 million total.

The challenge resonated so strongly with the 100 donors who participated that the fundraising wrapped up in January 2020 with more than $43 million raised for CC scholarships, including Smith’s initial commitment.

“This challenge was unique because donors had the option to give through estate commitments, in addition to outright gifts,” says President Jill Tiefenthaler. “For some donors who had not believed they could establish an endowment, this flexibility allowed them to fund a scholarship and support CC students.”

The challenge was so successful that Smith recently pledged an additional $5 million to initiate a new challenge in which he will match gifts of $50,000 or more for scholarships. His motivation is simple: He wants to make supporting scholarships more accessible for donors and ensure that future CC students can experience a transformative education.

“CC opened my eyes and my mind, both in the classroom and as a community. The college cared for me, and I’m in the fortunate position to give back,” says Smith.

Smith is passionate about inspiring others to give. Typically, establishing a scholarship endowment requires a minimum commitment of $100,000. However, through Smith’s new challenge, donors who give $50,000 or more qualify for matching funds, lowering the point of entry for establishing a Colorado College scholarship

“The Scholarship Challenge 101 was a tremendous success and ensures that CC can better support students with financial need in the coming years. We are beyond grateful to Will and the donors who participated in this effort. I’m excited to see how alumni and friends will respond to this new challenge,” says President Tiefenthaler.

Smith believes that an investment in scholarships today will have a lasting impact.

“Investing in a student’s education is the most valuable gift you can make, no matter the amount,” Smith says. “It lessens their burden, and the impact lasts a lifetime. One day, they’ll pay it forward.”

In addition to his charitable work at CC, Smith also has given generously in his hometown of Tulsa, Oklahoma, through the William S. Smith Charitable Trust and the Sherman E. Smith Family Charitable Foundation, supporting the Tulsa Ballet, the Parent Child Center of Tulsa, Domestic Violence Intervention Services, the Tulsa Area United Way, the Tulsa Boys Home, Metro YMCA, the downtown Rotary Club, the Salvation Army, the Nature Conservancy of Oklahoma, and the Riverview Lawn at Gathering Place project.

Along with his sister Susie Burghart ’77, who serves as chair of the Colorado College Board of Trustees, Smith made a generous gift in 2011 and named the Interdisciplinary Experimental Arts (I.D.E.A.) Space in the Edith Kinney Gaylord Cornerstone Arts Center.

Since the funds raised through Endowed Scholarship Challenge 101 are invested in the college’s endowment, they will ensure that students continue to benefit from these scholarships in perpetuity.

“Throughout my life, I’ve felt how powerful human connection is, and I learned how important it is to give,” says Smith. “Really, I just feel lucky. For those of us who have benefitted from Colorado College, we are the lucky ones.”