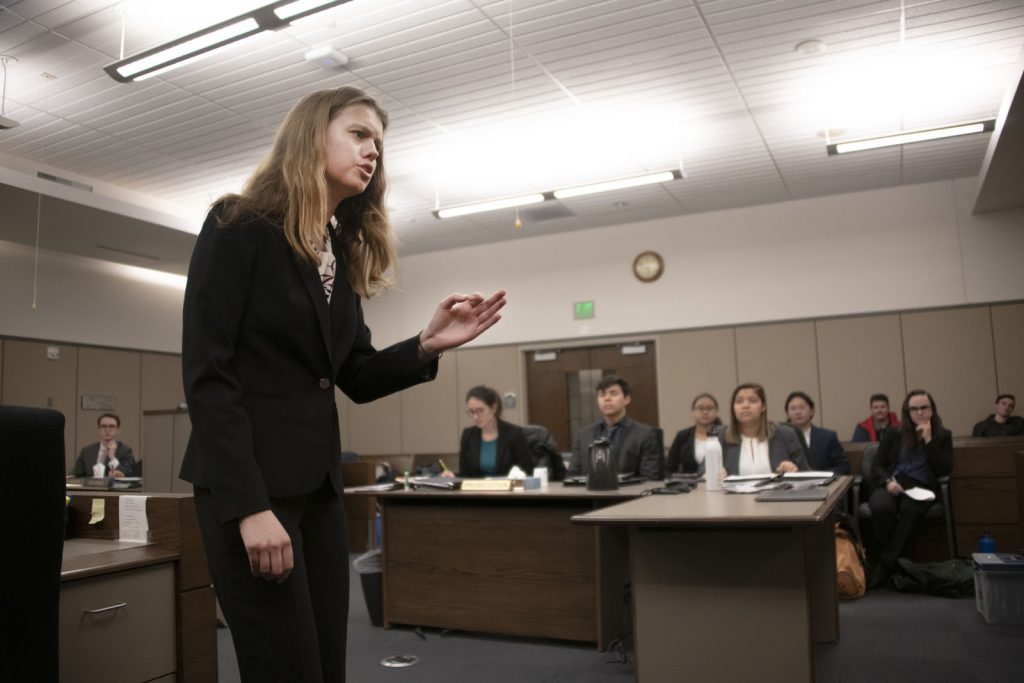 Emma Gorsuch ʼ21 delivers the opening statement for the defense during a mock trial practice at the El Paso County Combined Courts. Photo by Katie Klann

About 50 students participate in Forensics on one of three teams: Speech and Debate, Model United Nations, and Mock Trial. Unfamiliar with competitive communications? Here are the basics, per CC’s Speech and Debate Coach Sarah Hinkle.

Speech and Debate: This team offers 11 different competitive public speaking and performance-based events. Students choose up to six events to design and write for competition and travel one to two times a block to universities around the nation. This year, the team of five varsity members and five JV/club members earned numerous sweepstakes awards and qualified in 17 events to the American Forensic Association National Individual Events Tournament, the most rigorous nationally qualifying tournament in the nation. In addition to forensics events, the students routinely compete in tandem in International Public Debate Association-style debate. Learn more about the team’s recent successes online at 2cc.co/speechdebate (though the Tokyo trip was canceled due to COVID-19).

Mock Trial: Mock Trial is highly structured and involves two teams acting out a civil or criminal trial in which they argue either the prosecution or defense side of a case. The trial is observed by actual judges, who vote on which side had the more compelling argument. The students fluctuate between playing trial attorneys and witnesses, depending on a coin flip. Coached by Regina Walter ’80 with assistance from Chad Miller — both 4th Judicial District Court judges — each team had nine members for the 2019-20 tournament season and both won their regional tournaments.

Model United Nations: Model UN is an academic simulation of the United Nations where students play the role of delegates from different countries and attempt to solve real-world issues with the policies and perspectives of their assigned country. Once a team has registered for a conference, it receives a country to represent. At CC, it is unique in that it’s the only club where students immerse in this aspect of public policy engagement. Model UN provides the tools for students to translate the needs of a broader community into substantive policy solutions, and fight for these solutions to be implemented through diplomacy, compromise, and debate.