Award-winning filmmaker Menelek Lumumba ’02 double-majored in English and Film and Media Studies at Colorado College and studied cinema at Howard University. His years steeped in the universes of two private colleges provided the perfect fodder for Lumumba’s film, “1 Angry Black Man,” which has been engaging audiences with its thought-provoking narrative since its release June 5. A favorite of film festivals since 2018, it’s also garnered two best narrative feature awards.

The film’s backdrop is a liberal arts college where a diverse group of students are studying Black writers, including James Baldwin, Zora Neale Hurston, August Wilson, and Ta-Nehisi Coates. The students are engaging in nuanced conversations, critiquing classic texts while drawing parallels to current events on campus and in society. A tense undercurrent runs through the film. The protagonist, Mike, is a Black student who has been falsely accused of sexual assault by a white female student. 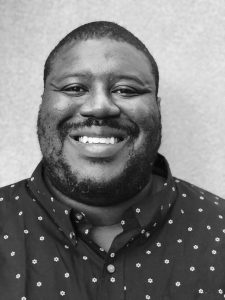 “Mike doesn’t reveal his emotions to the audience. It’s a defense mechanism a lot of students of color use in predominantly white institutions to guard themselves emotionally. We’re never quite able to wrap our arms around Mike because it really is about examining his response to this situation,” says Lumumba.

Even before deciding to focus on literature and racial issues, Lumumba knew he wanted to write and direct a film that takes place primarily in one location. And, the academic universe is one in which he is well versed. In addition to his studies, Lumumba has worked professionally in education for 15 years, including stints at Colorado College, Occidental College, and the University of New Mexico. He returned to CC in Block 6 of 2020 from his home in Phoenix, Arizona, to teach a screenwriting course.

“All of those elements had to be real things that would be seen in a small, residential liberal arts classroom. The texts discussed in the film were books that I could truly examine and critically analyze. It was important to me that the academic part of it could hold up to a smell test,” Lumumba says.

Acting Co-President Mike Edmonds has known Lumumba well since he was a first-year student at CC, on the football team, and actively involved with the Black Student Union.

“I’m very proud of how Menelek used his experiences at CC to be reflected in the film and proud too, that on the list of credits and supporters you see so many names of Black alumni. It is really wonderful and quite powerful to have known Menelek from a first-year student now to this award-winning filmmaker, and to see that he was able to accomplish this feat with the support of people he met at CC when they were students,” says Edmonds.

Edmonds notes that not only is the depiction of the classroom dynamic true to life, but the film is based on experiences that Black students at liberal arts colleges would find familiar.

“It’s a powerful film and it’s extremely relevant now. It represents real lived experiences, both then and now,” Edmonds says.

Lumumba’s close friend, Oscar-nominated cinematographer Hans Charles, shot and produced the film. Even with its success at film festivals, it was difficult to get distribution. Lumumba never quit, though he faced the prospect of it not being widely seen.

“When you want something as badly as this and it doesn’t work out, you have to start letting go of the dream or the dream will destroy you. It’s not the same as quitting, but it’s close. And here we are now, the film is out to critical acclaim and a lot of people are going to see it. It’s overwhelming,” Lumumba says.

He and Charles have TV pilots and a feature film in the works.

Lumumba knows that because of Colorado College’s antiracism initiative, difficult conversations about race have been happening on campus for the last few years.

“From what I see, especially now as the world is on fire, wanting justice, wanting human rights, Colorado College is in a place of leadership to handle this kind of thing,” he says.