Conarroe, a three-year letter winner in basketball at Colorado College, spent the last nine seasons at CSU Bakersfield, the first eight as an assistant coach before his promotion to associate head coach prior to the 2019-20 campaign. 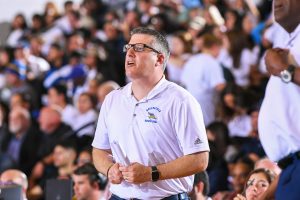 “Colorado College is a special place that is an ideal fit for me and my family,” Conarroe says. ”I am grateful to [Vice President and Director of Athletics] Lesley Irvine for believing in me. Her passion for Colorado College and vision for CC Athletics is clear and she is a big reason I am coming home. I would also like to thank President [Jill] Tiefenthaler for this opportunity and her excellent leadership of the college, and Dean [Mike] Edmonds, who has been a mentor to me just like many alums, I can’t thank him enough.”

During his tenure at CSUB, Conarroe helped Head Coach Rod Barnes rebuild the program and send the Roadrunners to their first-ever berth in the NCAA Division I Tournament in 2016 and three postseason appearances in the last four years, excluding the pandemic-shortened 2019-20 season.

“I am thrilled to welcome Jeff back home to Colorado College,” Irvine says. “Jeff stood out in what was a very competitive national search. He is a high-integrity leader whose passion for his alma mater is contagious and engaging. I have no doubt that the men’s basketball program will thrive under his leadership and look forward to supporting him and the program in this next chapter.”

On the court, the 2015-16 and 2016-17 seasons were the most memorable for the Roadrunners during Conarroe’s tenure. He helped guide the team to a 49-19 record and a 26-2 mark in the Icardo Center during that span. In 2015-16, CSUB earned its spot in “March Madness” after winning the Western Athletic Conference tournament.

The following season, the Roadrunners won the WAC regular-season championship and became the first-ever No. 8 seed to reach the National Invitation Tournament semifinals. CSUB also finished No. 9 in the mid-major Top 25 with the highest RPI in program history at 59. The Roadrunners were in the Top 10 of several defensive categories nationally, including a No. 1 ranking in transition defense and No. 2 ranking in defensive points per possession, while the team included its first-ever Defensive All-American selection, Jaylin Airington.

The 2018-19 season featured CSUB’s third trip to the postseason in the last four years as Bakersfield accepted an invitation to the Collegeinsider.com Postseason Tournament (CIT) and again proved to be a force on the road. CSUB won back-to-back games away from home before falling in the CIT quarterfinals.

“I have been fortunate to work with one of the best coaches in the country for 16 years of my career,” Conarroe says. “Coach Barnes has been an exceptional mentor and gigantic influence on my life.”

“The Colorado College student-athlete experience is one of the best in the country,” Conarroe says. “We should quickly be able to build a championship culture as CC is the premier platform to achieve a holistic standard of excellence on and off the court and in the lives of our student-athletes. Everything the school’s ethos embodies creates opportunities where competitive success and academic excellence should be expected.”