In anticipation of the Block Plan reaching the half-century mark, Colorado College faculty began planning several creative projects to commemorate the occasion three years ago. Two books, a documentary, and a podcast are slated for release this fall, each format lending itself to a different take on the Block Plan’s impact on the students, faculty, and staff who have experienced it.

Supported by a $225,000 grant from the Inasmuch Foundation, Susan Ashley, professor emerita of history and chair of the Department of Economics and Business, conducted research and wrote a history of the Block Plan, and Steven Hayward, associate professor and chair of the English Department, led the other projects.

“At Colorado College, what’s important is not how conclusive your answers are, but the vitality of the questions that you’re asking. That spirit of interrogation that’s in the movie, the podcast, and the books also takes us back to the genesis of the Block Plan when Glenn Brooks began with the questions of ‘What are we doing?’ ‘How do we think we’re doing it? and ‘How can we do it better?’ ” explains Hayward.

A professor emeritus of political science who taught at CC from 1960 to 1996, Brooks helped design and implement the Block Plan. 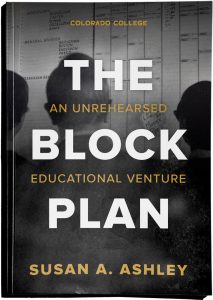 “The Block Plan: An Unrehearsed Educational Venture” is a meticulously researched historical book that follows the emergence of the idea, its adoption, implementation, and evaluation. Ashley, whose research typically is concerned with the end of the 19th- and early 20th-century, interviewed faculty members who helped develop the Block Plan. Additionally, she delved into oral histories, meeting minutes, and other records. Two students, Isaac Rubinstein ’18 and Benedict Wright ’20, both history-philosophy majors, provided research assistance.

“Structurally, the plan settled into a rigid orthodoxy that I don’t think the architects anticipated, nor do I think they would have embraced. However, there’s been an exceptional degree of creativity in terms of the content of the curriculum. And, I don’t think they could have imagined how much the Block Plan would promote innovative teaching,” says Ashley.

Hayward says the podcast takes listeners into the formative time of the late 1960s. Among audio gems are excerpts of previously “lost tapes” where Brooks describes the nascent plan to colleagues. The second book, “The Block Plan in Nine Questions,” he says is a non-academic version. The Hayward/Ashley collaboration features graphics and answers to common Block Plan-related questions.

Meredith Mantik ’11 is the film’s editor and shares a co-writing credit with Hayward and Beasley. For more than two years, she’s been sifting through copious footage and working collaboratively on the film. In addition to covering the history, it follows three students and former Provost Alan Townsend through a year of life on CC’s Block Plan.

“My job as an editor is to make sure that the story works and that the themes resonate. There are lots of parallels between filmmaking and working on the Block Plan: you’re working in a group often in a high-pressure environment. Studying film, English, and philosophy at CC gave me the tools to create cinematic stories like ‘The Block Plan,’” says Mantik.

Beasley enjoyed meeting some of the educational system revolutionaries who forged the Block Plan.

“The original kernel of the idea started at Murphy’s Bar over a beer. We have Steven interviewing all three of them in the booth where it originated. This is the first time I’ve co-directed a piece, so it’s been a learning experience. I’ve learned more on this project than I have on any other projects in quite a while,” Beasley says. 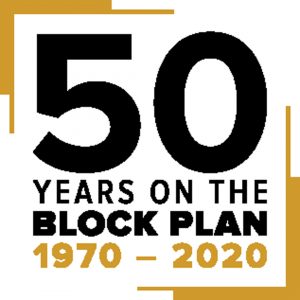 Learn about release dates and other Block Plan 2020 celebrations at coloradocollege.edu/blockplan50/