As COVID-19 continues to rage across the country, communities struggling with food insecurity grow increasingly vulnerable. In August, The Denver Post reported one in three Coloradans were struggling to eat. Last month, CNN reported there were thousands of cars in line to collect food from a pantry in Dallas, Texas.

While Congress sits on another stimulus bill, some communities have embraced forms of mutual aid, such as food redistribution, to help people hit hardest by COVID-19.

How snack-pack kits turned into a weekly food pantry initiative

For Amy Hill, who directs campus activities at Colorado College, discussions on food equity date back to 2018, when she started a “build-your-own-snack-pack” program. The program aimed to address food insecurity for students who remain on campus over long breaks, when campus dining halls reduce their meal options and hours.

The snack-pack program ran on afternoons before the start of a long break. The offerings included snacks like popcorn and candy, but not any fruits and vegetables or ingredients you could build a meal with, Hill said.

Sophie Cardin ’22, the vice president of outreach for CC’s student government association (CCSGA), said food insecurity plagued the campus long before COVID hit. When her outreach committee put out a survey to students about the costs of college textbooks last spring before the pandemic, the results were sobering.

“A surprising number of students at CC, and in colleges in general, have skipped meals, not bought groceries, lived off of ramen in order to afford textbooks,” Cardin told The CC COVID-19 Reporting Project.

So when the pandemic hit this March, Hill knew she would need to step up her efforts even further. Some students stranded on campus wanted free, healthy options for their meals without having to risk COVID exposure at a grocery store, Hill said.

In early April, Campus Activities paraprofessional Antonio Soto ’19, joined Hill to help turn the snack-pack program into a well-stocked food pantry where CC students living on campus could shop weekly for their meals.

After the school sent home the majority of students last spring because of the pandemic, about 300 students remained on campus, Hill said. Over the course of the summer, around 65 additional students returned to campus.

“We bulked up what we were doing at that time a little bit more,” Hill told The CC COVID-19 Reporting Project.

In an average week, Soto estimated around 25 to 35 students sign up for a time slot to pick items out of the food pantry. Because of walk-ins, though, around 40 students typically show up. Hill and Soto said they spend around $600 per week on groceries for students, so every student is able to walk away with roughly $15 worth of food each visit.

At the end of spring and during the summer, some of the Campus Activities budget paid for the pantry initiative. The project was able to continue throughout the Fall Semester because CC’s student government decided to fund it as part of their annual budget.

Cardin said CCSGA continued meeting throughout the summer in order to take care of student needs on campus.

“There were a lot of complaints about the Bon Appétit hours being weird and the food not being healthy enough, and people not being able to get to grocery stores,” Cardin said. “So, the Executive Council met with Amy Hill from Campus Activities, and we started by just funding dry goods and canned goods.”

Although some talks preceded CCSGA’s decision to fund the pantry initiative, Cardin noticed that many CCSGA representatives have felt a greater need to engage in redistributive justice programs despite a reduced presence on campus.

“For a lot of people who didn’t know these issues existed on campus, COVID has really brought to light some of the problems that are underlying and always there,” Cardin said.

A look inside the pantry 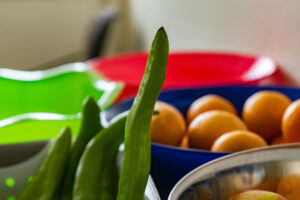 Dairy-free alternative milk options, which have long shelf lives, are also a favorite. Hill said she tries to stay away from distributing perishable goods like yogurt, cheese, butter, and eggs because they have limited refrigerator space, and she doesn’t want to create waste if students don’t take everything each week.

Small containers of cereal and Pop-Tarts aren’t very popular among students, Hill said, though they are some of the easiest snacks to find at the store.

One week, Hill and Soto were surprised to find that the canned goods they started offering because of student demand were left untouched.

“We had a few ‘aha’ moments and learning curves that happened over this,” Hill said. When she asked students why they didn’t take any canned goods, they told her that none of them had functional can openers.

“So the next week we went to the Dollar Tree and bought 15 functional can openers to pass out to students,” Hill said.

During the first few months of the pandemic, Hill and Soto did all the grocery shopping, unloading and arranging of the food, sanitizing the space, and pantry supervision by themselves.

The project became much easier, they said, once more people realized the food pantry was happening, and staff and students signed up to volunteer.

Soto said so many staff members reached out to help volunteer that he actually had to turn some of them away and create a waitlist in case people canceled.

“It was amazing to see how many staff are willing to help out and volunteer,” Soto said.

In June, four Campus Activities interns also started helping with the pantry, and became its main organizers for two weeks in August, when Hill and Soto were swamped with preparation for New Student Orientation.

Hill said they plan to run the pantry over Winter Break — on Tuesdays, instead of Thursdays — and into the spring. For CC students living on campus, there will continue to be no barrier to entry.

“We didn’t want to say, ‘Oh, you could only use the food pantry if you fall into this financial bracket, or you have demonstrated need,’” Hill said. “We wanted anyone to be able to come through without shame and take what they need.”