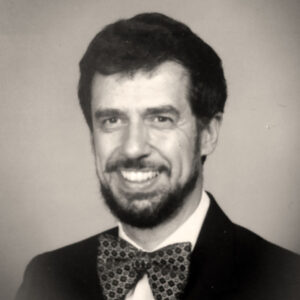 Professor Emeritus of Chemistry Keith Kester died suddenly from illness on July 17, in Denver, Colorado. Keith taught inorganic chemistry at CC for 44 years from 1967 until he retired in 2011.

Keith’s love of science and its interconnectedness with the wider world was no secret and something he shared openly with his students. He maintained a contagious sense of curiosity and wonder his whole life. He likened the interconnectedness of the liberal arts to how he saw essential chemistry, “with the nature of bonds between atoms and molecules playing a central role in his courses.”

Keith designed and co-taught the popular CC course Science, Religion, and Society for 15 years with Religion Department Chair Joseph Pickle. This course integrated Keith’s two lifelong passions, science and religion. He was in awe of how the two intersected both in life and in theory.

The Integrated Natural Science MAT program was originated in 1994 by Keith and Education Professor Paul Kuerbis. For more than 25 years, close to 2,000 teachers in the Pikes Peak region participated in some aspect of the program, which ended around 2014. Keith also taught the very first gender and science course in what is now the Feminist and Gender Studies Program. He was a committee chair for the Watson Fellowship, Pre-Med, and Women’s Concerns committees and served as acting dean from 1989-90.

Keith participated in and relished all of the fine arts. He was an excellent pianist and a dramatist. He even played a pirate in CC’s 1969 production of Shakespeare’s “Antony and Cleopatra.” He was a creative carpenter who designed and built furniture for his family’s home. 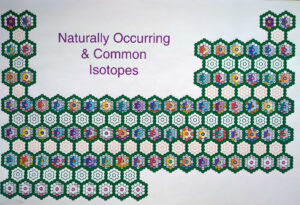 Keith loved nature and put that love into action by protesting with the Rocky Flats clean-up project, being active with the New Earth Covenant Community, and Society for Religion in Higher Education. His friends and family will miss him bursting into some song by Ella Fitzgerald or Cole Porter. 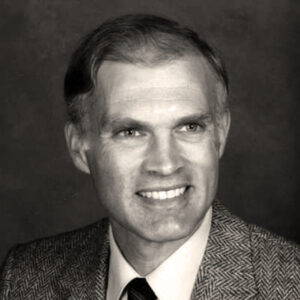 Tom enjoyed giving lectures as much as he enjoyed attending them. His passions included science, history, linguistics, exercise, camping, the Unitarian Church, public radio, and travel. He also was an Eagle Scout and active in scouting all his life with his daughters and grandchildren. Tom was an advocate and champion for the environment and for social justice.

Tom will be greatly missed by his children, Jerusha Vogel and Rebecca Kinraide, and his grandchildren Duncan, Matthew, Adric, and Eowyn. He is survived by his sister Pamela Sage and his cousin Dottie Welch. 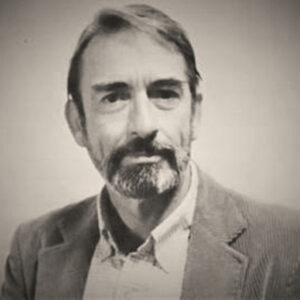 Professor of Journalism Thomas “Tom” Kinney Worcester passed away peacefully and surrounded by family on July 3, in Sisters, Oregon.

Tom served in the military, from the Reserve Officers’ Training Corps fresh out of high school to the U.S. Navy in the Korean War. He remained in the Navy Reserves on the destroyer escort USS McGinty, until his retirement as lieutenant commander.

After his military service, Tom became an instructor of journalism at Colorado College until 1958 when he moved with his family to Portland, Oregon, to join the faculty of Reed College.

In 1970, Tom moved to a small farm along the Clackamas River in Clackamas, Oregon. He then began his career as a freelance writer, editor, and photographer. His writings included coffee table books such as “A Portrait of Oregon” and “A Portrait of Colorado.” He also wrote a biography, “Norjak: An Investigation of D.B. Cooper.”

Tom retired in 1990, and spent his time fly-fishing, skiing, and traveling the world. He was also active in community service and won many honors, including Sisters Citizen of the Year, the Kiwanis Spirit Award, and Kiwanian of the Year.

Tom is survived by his wife, Lois Worcester, and his children Ken Worcester, Laura Worcester Law, and Mollie Worcester, all of Oregon City, and Andy Worcester of Bend, Oregon. Tom was the proud grandfather to three granddaughters, a grandson, and two great-grandsons. Tom was preceded in death by son, Phillip, and daughter, Sharon. 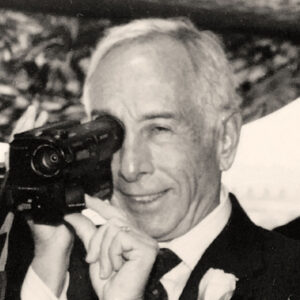 Harold C. Price died in Scottsdale, Arizona, on Sept. 3, after a long illness. He was on the CC Board of Trustees for many years, and was given life trustee status in 2012. Three of his seven children, H. Charles Price III ’75, Julie Lynn Price ’76, and James Michael Price ’87, and extended family members, Erin Price Hittesdorf ’08 and Max Price Hittesdorf ’17, attended CC and served as his introduction to the college.

Harold attended the New Mexico Military Institute and then spent two years in the U.S. Army, serving as a medic during World War II on Long Island. While on Long Island, his Aunt Miriam invited him to attend concerts and visit museums with her in New York City. He attributed his lifelong appreciation of art, music, and theatre to these forays with his aunt.

Harold graduated from the University of Oklahoma in 1951 on the GI bill, earning a bachelor’s degree in business administration. He succeeded his father as president of the family business in Oklahoma, the H.C. Price Company, in 1963 and served in that position until 1980. The company was headquartered in Frank Lloyd Wright’s only skyscraper, The Price Tower, commissioned by his father. During his tenure, the H.C. Price Company and its partners expanded its pipeline construction and coating services into a global business with offices in Great Britain, the Netherlands, Libya, Iran, Iraq, and Singapore.

Harold moved to California in 1983, where he enjoyed hiking, sailing, running, and kayaking in the Pacific well into his 80s. He was active in the arts community, serving on multiple boards across the country. He also served on the board of the George M. Sutton Aviary Research Center in Bartlesville, Oklahoma. That was, perhaps, inspired by Harold learning to fly gliders at the Air Force Academy in Colorado Springs.

Harold learned so much from watching his children attend CC, visited them on campus frequently, and would even study along with them to have informed discussions of philosophy or whatever class they were in. He loved the Block Plan and believed in the value of a liberal arts education. Yet, it was witnessing the personal and intellectual growth of his children and grandchildren during their years at Colorado College that moved him, when invited, to become involved as a trustee.

At the trustees dinner in 2012, Professor Susan Ashley called Harold, “the very definition of a friend of the college.” He is survived by his wife, Sandy, seven children, 10 grandchildren, and one great-grandchild. 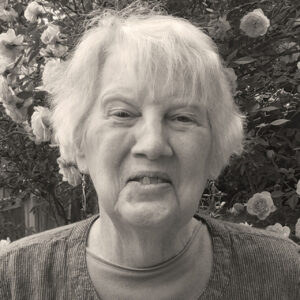 Pamela “Pam” Anne Jones, wife of CC Professor of Chemistry Harold Jones and former program assistant in the economics department, passed away on Feb. 5, in Colorado Springs. Pam died peacefully after a two-year battle with cancer, surrounded by her family and visited by many of her CC “family” in her final days.

Soon after she and Harold arrived at CC in 1969, Pam became immersed with the book review clubs, hiking groups, and wives’ groups that were prevalent in the CC community at the time. She also learned to swim in the Schlessman pool, taught by Coach Jerry Lear. In the 1970s, Pam began bringing a 9”x13” home-baked cake to the Chemistry Department every week, feeding the stalwart chemistry majors still working on Friday afternoons, a tradition that continued for many years.

Pam’s daughters were the ages of a handful of the other CC professors’ children, so there were many CC play groups that Pam and her daughters were involved with when the girls were young. In the late ’80s, Pam began working in the Economics Department as an events coordinator and worked there for a decade.

Pam graduated from Portland State University with a psychology degree. She was the administrator for the Colorado Springs Chorale for many years. She was a volunteer throughout her life with the League of Women Voters, Pikes Peak Area Council of Governments, Urban Peaks, the Center on Fathering, and many other organizations. She was most proud of her years as a court-appointed special advocate, where she guided many children through the juvenile court system to safe and healthy home environments. She received a Colorado Supreme Court Award for volunteer service in 2001.

An avid runner for many years, Pam was involved in the Pikes Peak Road Runners. She completed many 5K and 10K races as well as the Denver Marathon. She continued to stay active until her cancer diagnosis, swimming each week, walking with friends, and hiking on local trails. She was an encyclopedia of local flora and fauna and a knowledgeable bird watcher throughout her life.

Pam believed that she could create a better world by acting locally, and she was an inspiring example. After she fell when walking across the train tracks near Uintah Street, she lobbied for and won the placement of a pedestrian bridge over the tracks from Monument Valley Park. When the city put up new street signs for the incorrectly spelled ‘Wiliamette’ Avenue, Pam was furious as an Oregonian and former Willamette University student. She spent weeks speaking out at city planning meetings until the signs were corrected.

She also invested time, energy, and money in the Middle Shooks Run neighborhood she loved. A few years ago, she started a Kindness Fund at Columbia Elementary School, making sure the students there had the hot lunches, warm clothes, supplies, and cultural experiences they deserve.

After retiring, Pam continued to stay active with the book review club she had joined years before, and a quilting group consisting of many CC friends. Pam is survived by her husband; her daughters, Rhiannon Gallagher and Dorothy “Dorrie” Jones Munhall ’96; two sons-in-law, Patrick and Mike; and three grandchildren, Brendan, Anna, and Henry. 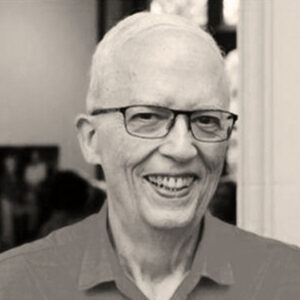 Rod was a passionate admirer of the fine and decorative arts, particularly of the 20th century, and acquired expert knowledge in arts and crafts pottery, American studio pottery, and French ceramics. He was a voracious reader and possessed an extensive library on the decorative arts.

After his retirement, Rod became a decorative arts dealer and regularly participated in antique shows and art and crafts symposiums. Balancing his love of the arts, Rod was an enthusiastic watcher of college basketball and track and field events, particularly if Colgate was competing.

He will be greatly missed by many friends and acquaintances for his passionate love of art and design, his generous sharing of his knowledge, and his dry sense of humor. Rod was predeceased by his sister, Paula M. Ganser, and is survived by his son, William C. Barnes.