The first-ever block break at Colorado College occurred in September 1970, marking the end of the very first class conducted on CC’s new academic schedule, now the iconic Block Plan. Coincidentally, this also marked the genesis of a now-beloved CC tradition, the Aspen Bike Trip. For the past five decades, the trip has remained an arduous yet rewarding adventure for CC students, bringing together both novice cyclists and seasoned fanatics. 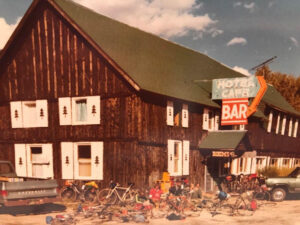 For decades Twin Lakes Restaurant/Hotel was the highlight of the Aspen Bike Trip. Students would get to Twin Lakes to unwind at the restaurant, Photo courtesy Bevo Tarika ’81

As Shove Chapel strikes noon on the fourth Wednesday of Block 1, 50 students close their laptops, turn in their final papers, grab their helmets, and begin the first uphill climb of the Aspen Bike Trip. The first day (45 miles) takes the group through Woodland Park to Round Mountain Campground, just past Lake George. On the second day, the group logs a whopping 74 miles, biking down Wilkerson Pass, through Buena Vista, and ending at the idyllic Twin Lakes. The final stretch is a short but arduous 18 miles up from Twin Lakes to Independence Pass, elevation 12,095 feet. After celebrating together (and often with curious strangers), the group cruises down the mountain — an exhilarating 19 miles of pure downhill, with breathtaking views of the Maroon Bells, into the town of Aspen. The weekend is full of golden aspen trees, delicious food, and new friends.

Not much has changed in 50 years — the touring route, silly costumes, and enthusiasm has held strong over the decades. Alumni across generations remember the feeling of summiting Independence Pass, the new friend who helped them fix a flat tire, and of course the whoops of encouragement, salty snacks, and free rides from the support vans, which flag the cyclists during the trip.

Melissa Walker ’72 participated in the very first ride to Aspen in 1970, one of three women on the trip. She didn’t own a bike at the time, and borrowed a 10-speed Raleigh Record from a classmate. “I didn’t know what to expect, but I wanted to try something new,” says Walker. Born and raised in the small town of Minden, Louisiana, Walker had followed her older brothers Rolle Walker ’69 and Winston Walker ’70 to CC, drawn to a small college, a liberal arts education, and the beautiful Colorado mountains. Walker’s younger sister Priscilla Walker Engeln ’73 (married to Jay Engeln ’74) also attended CC, as did Walker’s husband, Les Goss ’72.

Walker recalls a quirky end to the trip. Instead of vans, the group of approximately 20 students piled into a propeller plane, and flew from Aspen to the Colorado Springs airport. “It was a mass of people and wheels, with the bikes jammed into the aisle,” she remembers. “But we were too tired and happy, and enjoying new friends, to care about the tight quarters.” When they landed at the Colorado Springs airport, the group hopped back on their bikes, and rode from the tarmac to campus. “Biking that last stretch home to CC, I truly felt like I was flying,” says Walker.

In later years, the Aspen Bike Trip began to take on new significance. Early in 1978, two first-year CC students, Andrew “Andy” Reich ’81 and Paul Sheffer ’81, died tragically in a plane crash together. Reich was a skilled cyclist, and while he never had the chance to participate in the Aspen Bike Trip, participants across the years claimed him as their own. Fellow CC students founded the Andy Reich Spirit Award, which is presented each year “to the participant who best personifies the camaraderie, endurance, determination, and love of nature that Andy associated with biking.” Each year, a student’s name is added to a plaque, which lives in CC’s Outdoor Education office. Reich’s family also generously endowed a fund to subsidize the Aspen Bike Trip, which helps to offset the cost of gear, food, and transportation. Through the Andy Reich Award and his family’s generous scholarship, Reich’s memory and legacy live on. 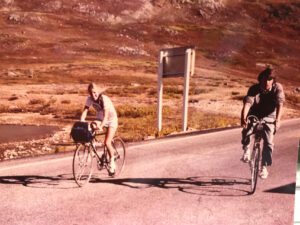 Most will agree that the trip is more about the people than the mileage. While CC’s cycling team has been integral to the trip planning over the years, and while the trip attracts passionate cyclists, many participants have never biked more than a few miles before embarking on the trip. Bevo Cathcart Tarika ’81, P’12, P’14, P’18 first rode the trip her sophomore year. She recalls fellow classmate Stan Stockdale ’83 riding up Independence Pass on a single-speed bike, much to the amazement of the other riders. Tarika received the Andy Reich Award in 1979, the year after Reich and Scoggins passed away. Tarika cherished the trip, and went on to help lead it her junior and senior years. Her daughter, Alexandra Tarika ’12, also rode on the Aspen Bike Trip decades later as a CC student.

Kendall Rock ’15 has fond memories of being the only first-year participant, riding with mostly senior students. “I didn’t know anyone on the trip, but a group of older girls took me under their wing and we became fast friends. When I got to the top of Independence Pass, the students who had already finished made a tunnel for us to ride through, and then I joined the party. At that moment, I knew I’d picked the right school.” 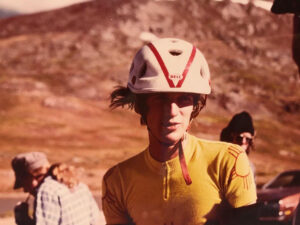 The Aspen Bike Trip has connected CC alumni across generations. “Every year I rode, there would be some older alum who would pull over in their car somewhere along Highway 24 because they noticed our costumes,” Teo Price-Broncucia ’14 says. “They would ask us if we were biking to Aspen, and share that they had done that trip some 20 or 30 years back.”

Price-Broncucia first rode the trip as a sophomore, and went on to help lead his junior and senior years. Then as a young graduate, he had his own surprise. Price-Broncucia was hired to work at a wedding in Aspen the fall after his graduation, and a sunny morning in late September found him shuttling chandeliers and decorations from Denver. As he rounded the last turn up Independence Pass, he spotted a group of young people celebrating and an equal number of bikes — simply by chance, he had crossed paths with the Aspen Bike Trip at the peak of their journey. 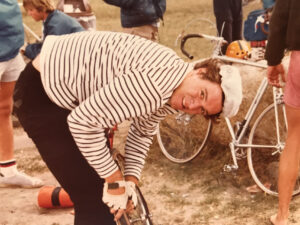 For many, the trip also holds personal significance. Erika Berglund ’15 signed up for the Aspen Bike Trip her junior year because her father James Harley “Barney” Berglund Jr. ’80, P’15 insisted she had to try it before she graduated. He was awarded the Andy Reich Award alongside Tarika in 1979. James passed away during Berglund’s junior year at CC, and her senior year, she joined the trip again, this time as a co-leader. “That last Aspen Bike Trip was indescribable. I was carrying on my dad’s memory, and sharing a special CC tradition with new students.”

Just as the CC bike trip has welcomed backcountry beginners since its founding, CCOE is committed to increasing access and opening doors. In recent years, CCOE has provided additional funding to offset bike rentals for participants, which is a barrier for many students. The office runs outdoor trips year-round, and offers low-cost and free rentals, training, and skill-building for CC students of all experience levels.

Safety is also a top concern. Traffic on Highway 24 has increased in recent years, and in 2019 CCOE changed the route to start from Woodland Park, eliminating the most trafficked leg of the route.

The vans are an integral part of the trip, and this shot shows the camaraderie and entertainment during breaks. Photo courtesy Kendall Rock ’15

COVID-19 also posed a safety concern this year, and CCOE had to postpone the in-person trip. Instead, they hosted a virtual Aspen Bike Trip using the free app, Strava. Participants logged their miles on Strava and CCOE tracked their progress, entering all finishers into a raffle. With nearly 50 participants in the Strava challenge, including alumni and current students, 2020 marks another successful year of the Aspen Bike Trip. “Of course, it wasn’t the same as previous years, and we’re sad that we had to cancel on the 50-year anniversary,” says Associate Director of Outdoor Education David Crye. “But the great turnout for the virtual ride and the wonderful stories we’ve heard over the years make us excited for what’s to come!”

So, next time you’re on Highway 24 and notice the aspen leaves turning gold, keep an eye out for young cyclists. A fellow CC Tiger may be just around the bend.