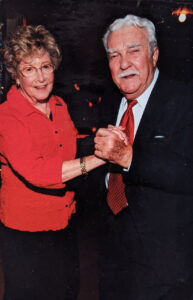 Colorado College has received a $500,000 gift from the Inasmuch Foundation for the Mike and Barbara Yalich Student Services Center. The new student services center will be adjacent to the Ed Robson Arena and will honor the legacy and contributions of alumni Barbara Neeley Yalich ’53 and her late husband Milo “Mike” Yalich ’50.

“We are deeply inspired by Barbara and Mike Yalich’s leadership in the Colorado College community and beyond, and we are immensely grateful to Inasmuch Foundation for their generosity and support through this gift, which will enable us to carry on the Yalichs’ legacy of community engagement,” says Mike Edmonds, acting co-president of Colorado College.

The Yalich Center will house the student wellness center, health services and counseling, bookstore and mail center, as well as an art studio, café, and pub. Significantly, the Counseling Center, Student Health Center, Wellness Resource Center, and sexual assault response coordinator will be consolidated on the second floor.

The health and wellness aspects of the center are not coincidental.

Barbara Yalich began her career as the international president of the Association of Junior Leagues of America, and also served as the first executive director of the Health Association of the Pikes Peak Region and executive director of El Paso County Mental Health Association. She devoted her life to public service, returning to the college at several points throughout her career and ultimately serving as director of development. In 1991, she was appointed vice president for development and college relations, which she held until her retirement in 1994. Following her retirement,  she was awarded an honorary Bachelor of Arts degree.

“Barbara Yalich has demonstrated throughout her career a real investment and commitment to well-being and to mental health,” says Heather Horton, director of the Wellness Resource Center. “So, having someone like her associated with our work and our offices is really exciting.”

Horton says having the health and wellness services located together has many benefits and is consistent with what CC is trying to do as an institution. “We want to move toward a more integrated health and well-being program, where things feel seamless to students rather than these very separate entities,” she says.

Horton is collaborating with Lynnette DiRaddo, who is running CC’s Arts and Crafts Program this year, on a project in which students decorate fabric and turn it into ottoman seating.

“Hopefully that will just be a start to that connection to creative and artistic connections with health and well-being,” says Horton.

Mike Yalich, who passed away in 2010, is remembered as a teammate, coach, community leader, and veteran. He served in the United States Navy from 1943-46, predominately aboard the destroyer U.S.S. Honolulu. He was part of numerous WWII campaigns in the South Pacific, among them the bombardments of Bougainville, Tinian, Saipan, and Guam. During his time at CC, Mike Yalich captained the NCAA championship ice hockey team that later was inducted into the Colorado College Sports Hall of Fame and the Colorado Springs Sports Hall of Fame. He also played football and baseball at CC, was manager of the intramural sports program, and a member of Sigma Chi fraternity.

The Yalich involvement in the community also includes a longtime connection to Inasmuch Foundation, established in 1982 by Charter Trustee Edith Kinney Gaylord ’36. The foundation, based in Oklahoma City, continues its late founder’s interest in Colorado Springs by supporting nonprofits that directly serve the residents of the city. Inasmuch provides grants to address dynamic community needs, from health care access to food and housing to the arts and journalism.

The goal is for the Mike and Barbara Yalich Student Services Center to be a valuable, versatile space for students and community members.

She notes the word ‘pub’ is used intentionally as it has different connotations than ‘bar.’ “A pub is  a place for responsible drinking and socializing. It’s focusing on building community and people coming together, not just a place where people go to drink,” Dickey says.