A Tribute to Stephen Allen Scott, Professor of Music

“I like the stream of great ideas seemingly pouring out of the back of Ryan’s head, the red-brick solidarity of Jonathan, Steve’s positive thumbs-up, and the fact that I look less fat than I actually am! I will cherish this shot for many years! ”

—  Professor of Music Stephen Scott, commenting on the photo following his retirement celebration in May 2014.

It was Victoria Hansen, Stephen Scott’s beloved wife, who emailed us the photo the morning after what had been a modest celebration of his retirement. Steve had made it abundantly clear that he did not want a formal retirement party. There would be no tearful farewells, no nostalgia on parade. And so there had been a dinner, and music of course, and also this photograph. 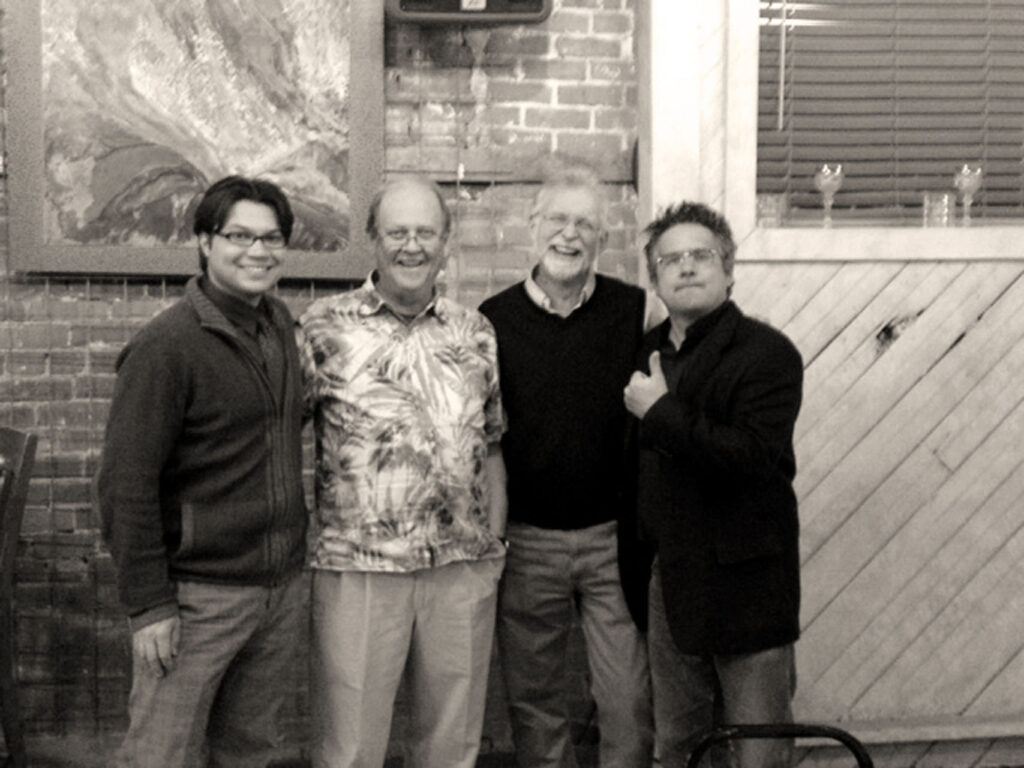 Whatever was said is lost now. Maybe a joke about Steve’s shirt. Or a suggestion that the photo would serve as the album cover of the band that the four of us would form immediately the next day — with Professor Jonathan Lee on sax. The two of us — Ryan Bañagale and Steve Hayward — are far left and far right in the photo, like a pair of (relatively) youthful parenthesis. But the fact is that no one in this photo actually sees themselves as old. Not that night. And not yet. We all believe we all have a lot of time left. When Steve first began to tell people he was thinking of retiring, there were expressions of incredulity. “I’ve got other things to do,” he would say.

As someone who eschewed the formalities of a retirement party, there’s no doubt in our minds that Steve Scott would want something to appear in these Bulletin pages that went beyond a recounting of his many accomplishments, but still, the contours of his remarkable career must be recalled.

Steve came to Colorado College in 1969 and brought a world of musical experience with him.  He trained as a composer; engaged independent field studies in Ghana, Tanzania, and Zimbabwe; transcribed the recordings of Charlie Parker, Miles Davis, and Gil Evans; and collaborated with figures such as Steve Reich and Terry Riley.

He founded the CC New Music Ensemble in 1972 and a crucial turning point arrived five years later when he and a group of students began to explore bowing the strings of a grand piano — taking the top off and using fishing line at first, and then other objects, to see what different sounds could be produced. Steve wasn’t the first to hit on the idea of bowing a piano — he was always meticulous about crediting others — but it was his compositional genius that brought it to fruition, which turned an experiment into art.

The Bowed Piano Ensemble was born from Steve’s two musical loves: jazz and experimental music. “At the time I was interested in large, extended chords derived from the harmonic explorations of the jazz musicians of the 1940s,” he wrote in a brief history of the ensemble. “The idea came to me that several of the nylon bows wielded by several players could create organ-like sustained chords.”

In 2008, NPR’s Morning Edition offered the following description: “To get a sense of what the bowed piano is, imagine a grand piano with the lid lifted off. Ten musicians crowd around, leaning over the innards of the instrument, like a team of surgeons performing an operation.”

The ensemble toured the world for decades, including appearances at the Sydney Opera House, Jazz at Lincoln Center, and a volcanic lava-tube-concert-hall in the Canary Islands. It became CC’s best known and most celebrated musical asset. More than 150 students were members of the ensemble over the span of 35 years.

Steve leaves behind a distinguished and lasting legacy, a loving family, and also many wonderful friends around the world, including the two of us, and Carlton Gamer, a former colleague in CC’s Music Department and a distinguished composer in his own right. A few days after Steve’s death, Carlton sent in the following remembrance to Victoria, which seems a fitting note on which to end.

It’s where you are —

Thank you for your beautiful new piano creations.

I will always treasure the memories of the years we taught together, of Hawk and Pres, Billie and Ella, Bird and Diz, Miles and Trane and the whole pantheon.

A concert in Stephen’s memory will take place during Homecoming 2021.