From Pride to ExCCellence: The path to winning championships relies on alumni support

It is about winning championships, fueled by the financial support needed to compete for those titles consistently.

“So much of what we have access to and the resources we do have are because of funding from generous donors,” the men’s soccer captain says. “The facilities upgrades are big, but the small donations help as well. Our goalies get new gloves every year because a goalie alum wants to do that for us. From the little things to the big things, it is nice to have that generosity shown by our alumni.

“But for CC to be one of the top Division III athletic programs in the country, we will need more gifts like this so we can keep building on what is already in place and create more opportunities to win championships.”

The goal of Tiger ExCCellence is to allow coaches to focus on winning while obtaining what they need to improve a program, whether it is struggling or a regular national tournament entrant.

“It allows for an aspirational culture,” says Lesley Irvine, CC vice president and director of athletics. “I do not care if you’re winless or No. 1 in the country, there are things coaches need to move the program forward. You have to keep improving, because athletics is a competitive business.”

That means giving the 350 Tigers what they need to succeed as students and as athletes within a financially sustainable plan. That means upgraded meeting rooms with ever-evolving technology, comfortable motel rooms on lengthy league road trips, and nutritious team meals, for example.

“All that support is what makes it possible for teams to win,” Schuler says. “Without any of that you cannot win consistently. The weight room, the training room for rehab, sports psychologists and nutritionists are critical. I wouldn’t know all that [I do] without the support we do have. They teach us how to take care of our bodies and our minds.”

“It’s a holistic, well-rounded approach to sports that a lot of schools do not have,” he adds. “That all combined makes us as successful as we are.” 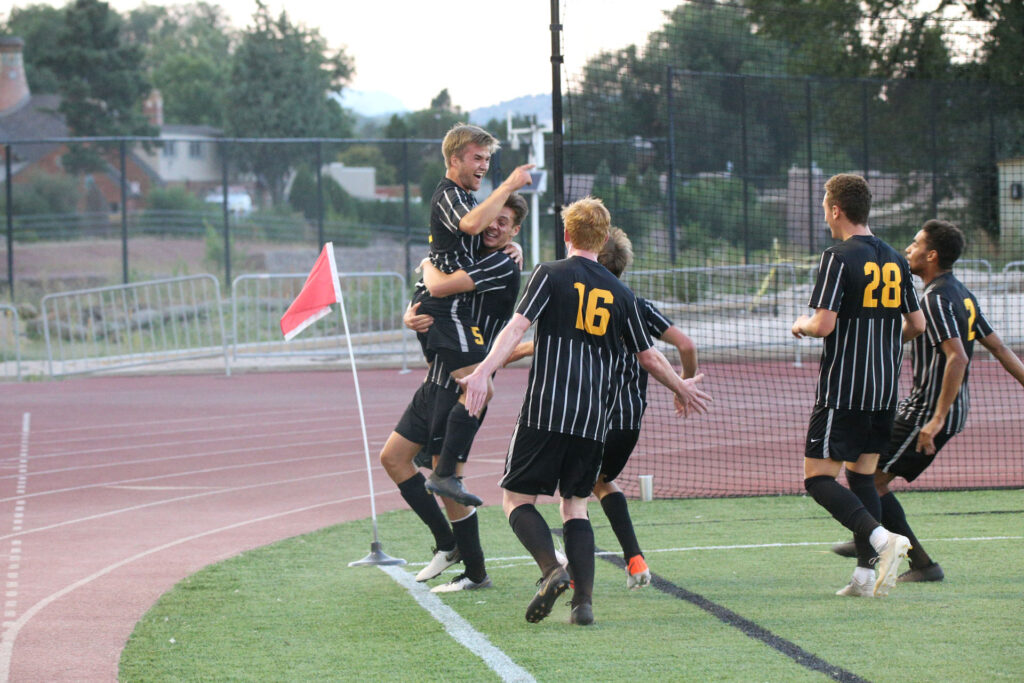 John Schuler ’21 is captain of the 2020-21 men’s soccer team. He helped the Tigers win their first Southern Collegiate Athletic Conference regular-season title and advance to the NCAA Division III Tournament in 2019. Schuler, an officer on the school’s Student-Athlete Advisory Committee, was named a Scholar All-American by the United Soccer Coaches during his junior campaign. Credit courtesy of CC Athletics.

The men’s soccer and women’s volleyball teams both advanced to the NCAA national tournament during the 2019-20 academic year while CC finished in the top 10% of Division III schools in the Learfield IMG College Directors’ Cup national standings for the first time.

For that to happen consistently, financial support must go beyond big-ticket items like El Pomar Sports Center and the on-campus Robson Arena, which opens this fall.

Tiger ExCCellence, formerly called Tiger Pride, is part of Colorado College’s overall effort to develop sustained annual giving by nurturing alumni and donor relationships. It started well before the pandemic and put the nation’s colleges and universities under varying degrees of financial strain.

“Athletics is just doing its part,” Irvine says. “Any successful athletics [department] has a robust funding program supporting it. ”

The dedication to win requires a financial commitment.

“The main thing at DIII level, which does not hand out [athletic] scholarships, is giving them an opportunity to be successful and win,” says Matt Kelly, the college’s assistant athletic director of development. “As a former student-athlete myself, the experiences and the process of being a collegiate athlete allow individuals to set themselves up for bigger and better things beyond their four years in college. That means travelling and playing the best in the country. That means getting them here. Whatever our programs hope to accomplish, this will support it.”

“You know you are joining a community that can help you later in life,” says the molecular biology major from Fort Collins, Colorado. “It’s a great academic school, which aspires to be a great school in athletics. Our facilities are [Division] I caliber, and as a DIII athlete, that is incredible to come across. That speaks to the level of support the school puts into athletics at all levels.”

To build upon that foundation, CC athletics is asking for donations ranging from a one-time gift of $50 to an annual contribution for the specific amount and sport of the donor’s choosing.

Gertz and Schuler, both scheduled to graduate this May, appreciate the current level of support and hope future Tigers can rely on more so they too can win championships.

“There’s so much more to it than putting on your cleats and going out onto the soccer field,” says Schuler, a physics major from Chicago. “When I went to a lot of other schools [during recruiting] I saw their soccer teams training and playing games but it wasn’t as well-rounded with a complete student-athlete experience thanks to the support behind the scenes.”

That support paid off with the program’s first SCAC men’s soccer regular-season title in 2019 and an NCAA berth, an accomplishment Schuler says he will always cherish.

Creating those memories is what Tiger ExCCellence is all about.

“It all comes back to our goal of competing for and winning championships,” Irvine says. “Annual giving allows coaches to address their needs and wants and to give their athletes what they need to compete at the highest level and succeed.”

“We want to win championships,” she adds. “I cannot overstate that.”