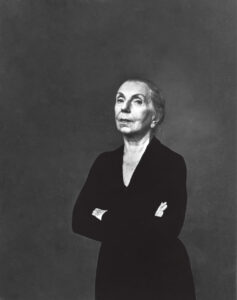 Pamela Mitchell was a student of Holm’s for two years and was profoundly impacted by her time with her. Considered one of the founders of American modern dance, as well as one of the 20th century’s most sought-after choreographers of musical theatre, Holm made her way to Colorado College in 1941 as a visiting artist, and returned to campus every year until 1983 to teach in the summer dance program. CC gave her an honorary degree in 1960, and at a later event honoring Holm’s legacy, Dance Magazine’s Nik Krevitsky wrote, “The evening was filled with convincing evidence that Hanya Holm … has prepared her students, then released them to fulfill their own potential, to become independent artists and to develop the security of their own uniqueness.”

The gift allows the department to create a new visiting artist position, which will enable it to bring a variety of artists to campus and create relationships over time, much like the relationship that existed between Holm and Colorado College when Pamela Mitchell was a student.

Pamela Mitchell attended CC for her final two years, also spending two summers on campus.“It was the most exciting, rewarding, and interesting time in her college career,” Jere Mitchell says.