As you’re reading this, Lauren Shoemaker ’11 probably is on a mountain in Colorado, brushing up on her alpine plant identification skills in preparation for her latest research project. On these mountaintops, above treeline, a stunning diversity of short-statured wildflowers and other plants form a unique community that’s adapted to the high-altitude conditions. Shoemaker wants to understand the invisible forces that allow these species to live together in harmony — and what will happen to them when climate change alters their environment. 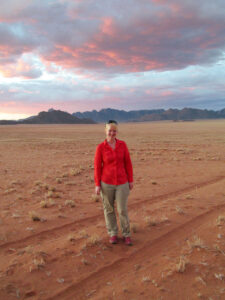 Before now, the ecologist’s work predominantly focused on grasslands, though she’s been known to climb a mountain or two. “The alpine is definitely my favorite ecosystem. I’ve always loved it from a personal standpoint,” says Shoemaker, who grew up in Fort Collins, Colorado. “I haven’t actually worked in the alpine as part of my research until, well, last week.”

This spring, Shoemaker, an assistant professor at the University of Wyoming, was named a 2021-25 Early Career Fellow of the Ecological Society of America. ESA names a cohort of fellows each year to honor early-career (less than eight years from their Ph.D.) ecologists who show promise for continuing out-standing contributions to the field. Shoemaker was elected for not only her research endeavors, but also her leadership in collaborative science, teaching, and mentoring.

She’s co-led working groups at the Santa Fe Institute and the German Centre for Integrative Biodiversity Research in Leipzig, as well as a project for an international global research network called DRAGNet (Disturbance and Resources Across Global Grasslands Network) — all co-led by other women. “I find that I’m working in women-led teams pretty often,” she says. “I’m passionate about supporting other women in science, and I’ve found in my own research I love working with women teams.

“Mentoring has been one of the most fulfilling parts of my job as assistant professor,” says Shoemaker. “Supporting students as they figure out what their passions are and their own career paths has been incredibly rewarding.”

Shoemaker’s scientific pursuits combine math and ecology to study natural communities. Mathematical modeling allows ecologists to make quantitative predictions about things like the abundance and diversity of species. But it’s not all number-crunching: Shoemaker tests predictions from her models in the field — and uses data from field observations to make her models better.

She’s long been interested in the theme of combining math and biology. She double majored in the two at CC, though at the time, she didn’t realize she could combine them. “I knew I wanted to do ecology longer term,” says Shoemaker, citing her interest in conservation. “I was just also really passionate about math and started taking math classes on the side — I found I loved them so much I decided to double major.”

Shoemaker remembers the specific class that set her on her current career path: A one-credit, semester-long course on mathematical modeling with Associate Professor David Brown. It was her first exposure to real-world applications of math models. In class, Brown encouraged the students to apply for a two-week workshop with the National Marine Fisheries Service at Mote Marine Laboratory in Florida that applied math models to fisheries science. Shoemaker applied, was accepted, and has been using mathematical modeling in ecology ever since.

“One of the really amazing things about CC is how you can make the curriculum your own,” Shoemaker says. “You can tailor your courses around your goals and career aspirations, and make them what you’re most excited and passionate about. I think that played a huge role in my love of ecology.”

After graduating from CC, Shoemaker earned a Ph.D. in ecology and evolutionary biology from the University of Colorado, Boulder, and was awarded a postdoctoral fellowship from the James S. McDonnell Foundation in complex systems science, which she took to the University of Minnesota. She has been assistant professor in the Botany Department at the University of Wyoming since 2019.

“Ecological communities are incredibly complex, and it’s really challenging to understand their dynamics and to think about them in a unified way across systems,” she says. “There’s a tendency to think each different ecosystem is distinct. But what I’m passionate about is looking at the themes that unify them.” 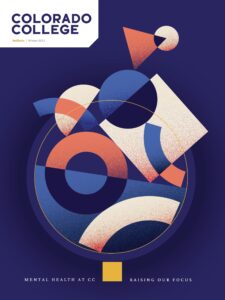